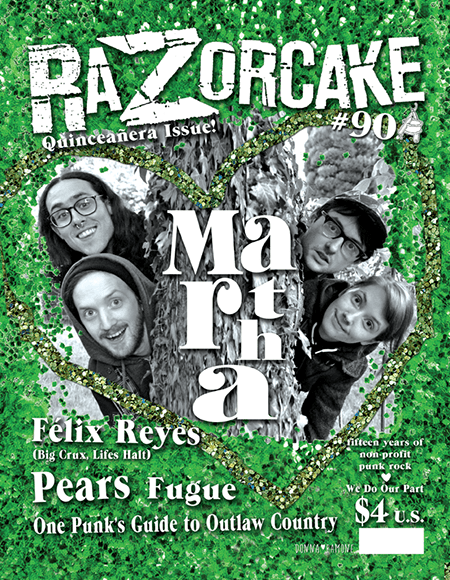 Cover design by Donna Ramone
Cover photo by Will Pilgrim

Martha: David Littlefair interviews the members of Martha from Pity Me (yes, fucking Pity Me), England.

“Martha had a DIY pedigree before they played a note. Nathan Stephens-Griffin and Daniel Ellis (One Night Stand In North Dakota) formed Martha with Nathan’s sister Naomi and their secondary school friend JC, who used to run the now-defunct Discount Horse Records.

I love Martha for the tunes: a righteous, hook-drenched mix of Housemartins-style thwacking guitar jangle; chunky Thermals riffs; twee gang vocals; and gender politics. I also love Martha for the unashamed sense of personality injected into each song they write. Their debut album Courting Strong, which takes a County Durham idiom meaning “dating”), is incessantly catchy without sacrificing hyper-detailed and evocative lyrical flourishes of spud guns, soap operas, and the minutiae of coming of age in cheap pubs at punk gigs. It is a document of growing up on the margins of a small, sort of boring working class town in decline. It’s what might have happened if John Osbourne’s kitchen-sink drama Look Back in Anger had been written by the queer-theorist Judith Butler. It also totally rocks. I spoke with them a bit about politics, identity, feminism, and pizza.”

“Félix Reyes is a human of many questions. Both for himself and the world he lives in. He is a cultural inspector, examining the fabric that binds us. His story is one of many changes, many evolutions, and many great bands.

If you’re unfamiliar with Big Crux’s 2014 release Ponchito, waste no more time. This album is punk of the highest caliber! Filthy in tradition and innovation, execution with foundation. The end product from years of hands-on research. I learned the word portend from the song “Future Cat.”

The trends may come in waves, consuming the inexperienced, but authenticity was there the whole time. Calm, collected, sitting on the beach with a boombox and a cooler, watching the show.”

Pears: Paul Silver interviews New Orleans’ Pears.
“A year and a half ago, all that word meant to most people was a type of fruit. Today, it’s a band operating at full throttle, both musically and in their work ethic. While the band is from New Orleans, they may as well be homeless because they spend nearly all of their time on the road, touring incessantly. Though they spend little time at home these days, The Big Easy has a strong influence on their music—from the debauchery of the French Quarter to the high crime rates, and to surviving hurricane Katrina, the city has left its mark. They play blisteringly fast, yet melodic, hardcore punk punctuated with gut-wrenching grindcore breakdowns.

Their name has its origin in a bad mushroom trip taken by lead vocalist Zach Quinn. In it, bananas came to represent all that was good and pure, while pears symbolized all that was bad. ‘Pears’ then became slang among Zach and his friends for bullshit. Zach suggested it for the band name. No one liked it.

The band may have risen rapidly from obscurity to top-of-mind, but they aren’t resting on their laurels. After signing to Fat Wreck Chords, they have continued to work harder and faster. They’ve set themselves on a trajectory with no apex in sight.”

“Trios are tricky. Each member must be aligned in a perfect triangle, experiencing shared synapses. Each instrument has to be pronounced. There is no room for slacking off, no time for wasted measures.

Fugue is a three-piece from Yorba Linda, Calif. The trio channels their struggle to reconcile their religious upbringing and punk values into spastic, frenzied outbursts. The anger subsides, giving way to exhaustion—ultimately relief and rebirth as self-actualized people independent of The Church of Jesus Christ of Latter-Day Saints.

They’ve stratified audiences along the West Coast with their unique, uncompromising form of Unwound and Karate-fed punk. Audience members are either instant devotees or open-mouthed onlookers who must process Fugue’s angular—yet melodic—barrage.

Siblings Jacob and Jordan Brown complete the triangle. The brothers share a rhythmic wavelength. Like Brendan Canty and Joe Lally of Fugazi, Jacob and Jordan are at once broodingly minimal and the band’s driving force. Jordan’s bass lines are the foundation for Garrett’s dissonant riffs, while Jacob pummels his drums with a clarity that breaks through the walls of distortion.

Fugue is never pretentious or melodramatic. No artifice, no cheap tricks, no gimmicks—just longtime friends exorcising personal demons through achingly earnest music. And stimulating eardrums in the process.”

One Punk’s Guide to Outlaw Country: “The outlaw country movement was about unfettered creativity, pure and simple. Much like punk, it was about standing up to the forces that favored the manufacture of sterile hits in favor of honesty and exploration in lyrics and sound…. They were loud and rambunctious and they grew their hair long and didn’t have the sort of puritanical need to keep rock and country separate that the country stars of the day had. They stayed up all night in studios, partying and writing songs. They fought back against the record labels to record those songs and to record them the right way. With their touring bands, with producers and studios of their choosing. With songs that they wrote or that they believed in.” Emma Alice Johnson gives her guide to outlaw country.

Jim Ruland enters the Twilight Zone of self reflection.

Cassie J. Sneider is ferociously complimented by a pair of bro-dude strangers.

Adrian Chi has some fightin’ words.

Rhythm Chicken has a beer in one had and a bat in the other.

Jennifer Whiteford provides some reasons to not be an idiot.

This issue is dedicated to the memory of Anthony Morabith, Brandon Carlisle, and Phil “Philthy Animal” Taylor.