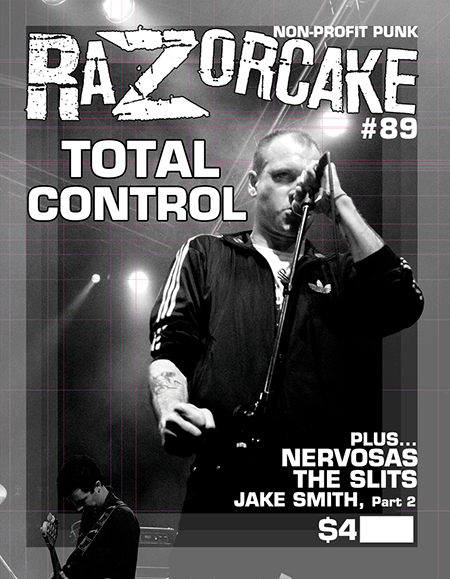 Total Control: Todd Taylor and Derek Whipple interview Australia’s Total Control. “Australia’s Total Control makes music that bangs away with weight and heft. It’s music with hooks that shake asses, fists, and heads…. As a culture we’re surrounded by pretentious, money-tongued, mindlessly photocopied art that presents hollow gestures as genius experience. Total Control is five blokes who named their band after a Motels song. They put a hell of a lot of work into making multi-dimensional music, but they’re not douchebags about it. They’re humble and funny instead. It’s nice to put music on and be enveloped in it, curious about it after it stops playing and to have it travel around in your mind as a cloud, rippling through your body sure as blood. It’s something to lean on like a concrete pillar. Total Control is one of my favorite active bands and I highly recommend you seek out both their albums, Henge Beat and Typical System.”

Nervosas: Todd Taylor and Hannah Blumenfeld (White Murder) interview Nervosas. “There’s a fine line between anxiety and clear-headedness, and that line is where self-awareness lives. Nervosas play music that is jagged, tense, triumphant, and, yes, anxious. But when you listen to them—or better, watch them—you’re taken to the side of awareness that is possibly the most clear, the least anxious, the side that fully immerses you in the intensity of their music, and the side that abandons the hyper-awareness of self and all the horrible trappings therein. You’re left with a silhouette of you, frayed edges blowing in the storm that Jeff, Mickey, and Nick create, and it feels so good.”

The Slits: Kevin Dunn interviews Tessa Pollitt of The Slits. Jennifer Whiteford writes, “Tessa Pollitt is one of the quieter, lesser known members of The Slits. She didn’t strive for a solo career or write a memoir or join other bands. And, as this interview reveals, she is choosing to remain fairly private, which is her right. But even with that desire for a quiet life, she recognizes why it matters that The Slits are given their due as an incredible band with a tremendous amount of influence and a fascinating history.

And, unfortunately, we’re all still having to drag The Slits into the spotlight they deserve. Interviews like this one—long form discussions with women who made significant contributions to the punk movement—are few and far between. Since the number of interviews with artists like John Lydon likely outnumbers the number done with artists like Poly Styrene by the dozen, it falls to us as punks and as reasonable, curious people, to seek out the histories that aren’t readily available.”

Jake Smith, Part 2: Jimmy Alvarado continues his conversation with Jake Smith from issue #88. “Jake Smith is a ‘lifer,’ one of a rare breed whose ‘punk’ bona fides are ingrained in their DNA and inform who they are as people and how they conduct themselves rather than what funny haircut they sport and who they know. His involvement in music as both performer and producer spans from the earliest days of the Bay Area punk and hardcore scenes to the more recent garage punk rumblings coming out of New York, with some interesting stops in between. His name might not be one of those you hear dropping off people’s tongues, but if you’ve been around the punk scene for any extended period it’s likely you’ve heard something he’s had his fingers in. Hell, you might’ve had his face on one of your shirts and not even known it.

In part one, we discussed his early years as a barely teen drummer caught up in the tail end of the Bay Area’s first punk wave; his tenure with hardcore legends Crucifix and his role in the recording of their seminal album, Dehumanization; and his initial disillusionment with what the scene became by the mid-’80s. In part two, we come full circle—moving over to the producer’s chair, flirting with the major label music machine, reconnecting with the punk scene, his thoughts on one of his old band’s ‘reunion’ shows, and what he’s doing these days.”

Sean Carswell rejects the expectations strangers hang on him.

Jim Ruland reflects on that which cannot be explained.

Cassie J. Sneider stumbled into an alternative future where she no longer needed pants.

Rev. Nørb offers one punk’s guide to life and loss.

Designated Dale gets infected by the movie remake disease.

Kiyoshi Nakazawa gets into some speculative fiction.

Rhythm Chicken was certainly not a poster boy for Punk magazine.

J.V. McDonough meditates on watching movies on the road.

This issue is dedicated to the memory of Dickie Hammond and to the marriage of Todd and Lorinda Toledo-Smailes.