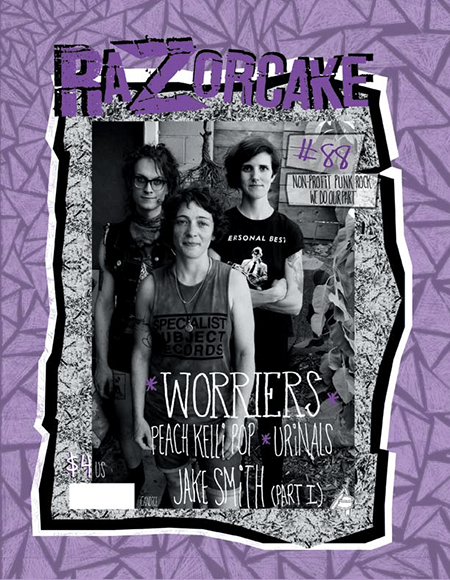 Worriers: Megan Razzetti and Todd Taylor interview Lauren, Lou, and Audrey of the Worriers. “Band rebirths are usually scary as shit. Not to sound overconfident on Lauren’s behalf, but how could I not love Worriers? I’ve always thought their voice is one of the most memorable in modern DIY punk…It simultaneously drips of tender vulnerability and conveys obvious strength…It sure is pleasant and addictive to listen to, but if you start singing along, you’ll learn that while there are few definitive answers and the world is a complex place, there’s never an excuse for shitty behavior that is often driven by a patriarchal society. Lauren reminds those who need reminding that feminism isn’t a side stage to DIY punk.” A must read.

Urinals (John Talley-Jones): Ryan Leach saddles up next to Urinals founder John Talley-Jones. “John Talley-Jones has been a constant creative presence in the Los Angeles underground music scene since the late 1970s. Talley-Jones formed the Urinals in 1978 while attending UCLA as an undergraduate. No member of the Urinals played an instrument before.” The conversation ranges from John Cage, to professional medical book buying, to starting your own record label. An interesting read.

Jake Smith, Part 1: Jimmy Alvarado talks to Jake Smith. “Jake Smith has been involved in the music for nigh on four decades. To the average punker, his name will likely best register as the one next to the word ‘guitar’ on Crucifix’s seminal 1983 LP Dehumanization. It’s an oddly fitting title in retrospect considering the band seems to have spent an inordinate amount of energy over the past thirty-two years all but erasing his fourteen-month tenure with the band—roughly a quarter of its existence—as active contributing member, tour funder, and uncredited assistant producer. The alternate version of their tale relegates him, at best, as a faceless ‘hired gun’ who played no active part in the creation of that album.” They let the mohawks down for this one.

Peach Kelli Pop: Todd Taylor hates the cops with Allie Hanlon of Peach Kelli Pop. “We’ve all got busy, fractured lives. Knees like getting jerked. Thinking’s hard. Some people get off poking digital eyes. The internet’s rife with it. Yet, I get a trolly, crude aftertaste with a filmy residue of misogyny from self-proclaimed ‘punk gatekeepers’ who dismiss Peach Kelli Pop as merely empty calorie, high fructose, confectioner’s sugar music looking for a commercial to stick to. Peach Kelli Pop’s music is a continuation of the legacy of largely overlooked and dismissed women in punk.” There’s a lot more snap and crackle to this pop.

Jim Ruland confronts a death in the family.

Ben Snakepit is trying to feel like a punk again.

Cassie J. Sneider wanted her mom to look at her prom pictures and cry…not in the good way.

Liz Prince is the living definition of a “killjoy.”

Rev. Nørb saw Schrödinger’s Cat; it was playing an AARP.

Designated Dale takes you through his grade school yearbooks.

Adrian Chi makes friends with a tree and talks to a cat.

Rhythm Chicken thinks the Obsoletes are anything but obsolete.

Aimee Pijpers attends a concert on the pale blue dot.

This issue is dedicated to the passing of Travis Fristoe, to the birth of Cora “CoCo” David McBride, and to the death of the Wulf Den. They may have put our howl to sleep, but they can’t undo our teeth marks.