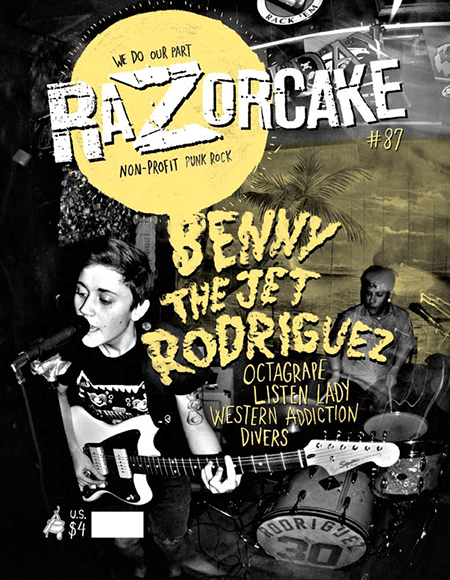 
Listen Lady: Kayla Greet interviews Seattle-based Listen Lady. Listen Lady is a merger of three New Hampshire natives and one member from the Bay Area. Some of the best pop anthems and punk jams are being pumped out of these transplants. With flutters of Sonic Youth and waves of the Pixies, Listen Lady has strong melodic vocals over a warm, bubbly bass and snappy, crashing drums. They discuss having cancer, the vulnerability in performing, and cat calling. A must read.

Divers: The one and only Nasrene Kordani sits down with Portland’s Divers. No, it’s not a club for recreational diving in the city of Portland, it’s an awesome band. The conversation ranges from who keeps the money, the unsuspecting nature of concept albums, and eating Taco Bell every day for a year. This is a fun one.

Western Addiction: In a van parked near the infamous Rainbow Bar and Grill in Hollywood, California John Mule gets serious with the boys in Western Addiction. John attempts to parse the lyrics to their songs and explain the value of metal. They’re not drinking vodka in hot tubs yet, but they’re well on their way to declining western civilization. Also, Chad has the best ass in the band.

Octagrape: Paul Silver gets weird with Octagrape from San Diego. Yes, the guitar player plays standing up without a strap. Yes, they improvise most of their material. Yes, the faces they make while playing are some of the best around. Yes, San Diego is a weird city. No, you shouldn’t skip over this interview.

Sean Carswell talks about the Dalai Lama’s Fear Of Lipstick and the horrid screeches of marmots (keeping wildlife, an amphibious rodent, for uh, domestic, you know, within the city… that ain’t legal either).

Jim Ruland goes on a “European vacation” with a raucous group of expat writers and collectors of the human experience.

Ben Snakepit gives his seal of approval to a select group of comic artists.

Cassie J. Sneider gets tanked on dumpster pear juice and method acts her way into a free breakfast.

Liz Prince’s ice cream cone of the mind melts down to lactic summer pools of melancholy.

Rev. Nørb reminds the kids that while sex is a natural, zesty enterprise it’s best not to do it atop a pinball machine.

Designated Dale gets nostalgic for the influences of nostalgia.
Adrian Chi learns the balance between full-bore and half-ass. Life is life.

Rhythm Chicken details the difficulties and pleasures of leading a life ethically and with honesty.

This issue is also in memory of Chris Pepus. Thank you for everything. You will be missed.