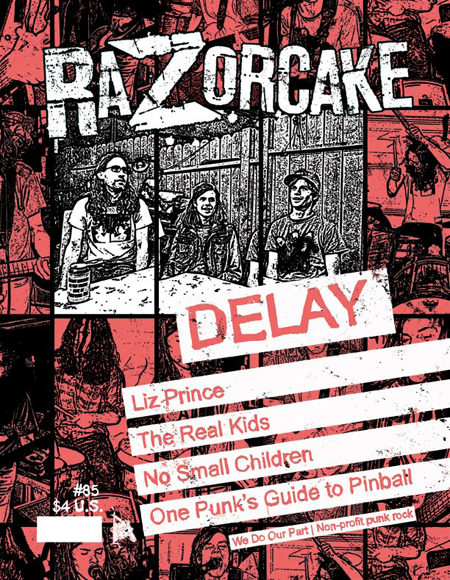 Delay: They’ve been playing together since eighth grade. Twin brothers and a friend from kindergarten come together to create some wonderful musical therapy. Sean Arenas and Todd Taylor get the origins and details in the backyard with Ohio’s Delay. The conversation ranges from taking grandma’s advice, the process of lyric writing, and the realities of being a DIY touring musician. A must read.

Liz Prince: Kurt Morris interviews Tomboy author and longtime contributor Liz Prince. What’s it like growing up as a tomboy? Is Tomboy really a teen book? When writing autobiographical material, how do you walk the line between full disclosure and protecting your privacy and the privacy of those close to you? Who the fuck peaks in high school? What does it mean to be able to make a living off your art? In the end, cats make us happy.

The Real Kids: John Felice is a legend for some of us. From his roots forming The Modern Lovers with Jonathan Richman to his own The Real Kids, Felice is a songwriting heavyweight. Ryan Leach talks to Felice about starting The Modern Lovers, going out on his own, and the highs and lows between it all. It reads as both an interview and a mini oral history. Fantastic stuff.

No Small Children: Alice Bag and Todd Taylor interview L.A.’s No Small Children. Every member of the band is a teacher by day and rocker by night. These three women are serious about having fun. And it shows in their music. Influenced by soul music, adult talk, and a genuine love for self-expression, No Small Children are a force of unbridled joy. A great read.

Sean Carswell is breaking his own bones with some style, ya’ know. Going 45 M.P.H. downhill on a skate.

Jim Ruland learns how to get over Clint Eastwood and love American Sniper.

Cassie J. Sneider thinks that it’s not meat if it’s made out of buttholes.

Rev. Nørb gets too hot for TV with the Undead Kennedys.

Liz Prince is punking posers at the (recent) Saves The Day concert.

Art Fuentes is reflecting on his mortality.

Rhythm Chicken puts his beer in a “cooler” to keep it from freezing.

This issue is dedicated to the Schrecengost kids and their beautiful mother… Sophie, Jesse, Lydia, and Megan. Your Dada loves you even more than conversion vans!