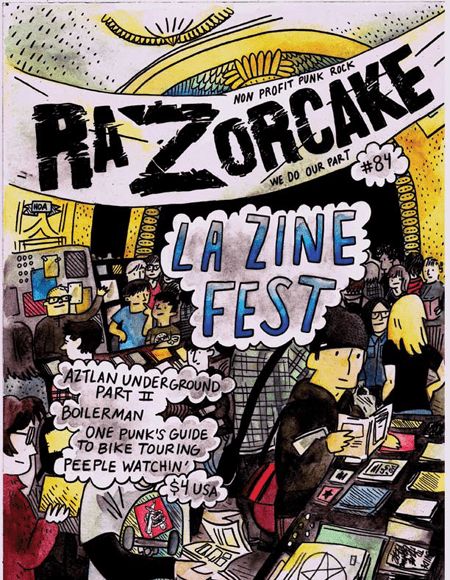 Cover design by Nation of Amanda

L.A. Zine Fest: Todd and Daryl chat with two of the organizers of the L.A. Zine Fest, Simon and Bianca. What are the logistics involved in organizing an exponentially growing event in a city that’s relatively hostile to the DIY community? How do you accommodate the overflowing response to such a fun, exciting, and necessary event? Who buys the toilet paper? The laughter definitely outweighs the tears, but there are tears nonetheless. Hilarious and heartwarming in the most authentic way imaginable. A must read.

Aztlan Underground Part 2: Jimmy Alvarado and Todd continue their talk with Aztlan Underground in Part 2 of this in-depth, informative, and entertaining interview. Aztlan Underground came up through hardcore punk in the ’80s and have incorporated hip hop, indigenous music, and social critique to their sound over the years. The discussion ranges from Zapatistas to dodging cops to the comingling of art and politics. There is also some peach pie.

Boilerman: Shannon Z. Thompson gets into the nitty gritty with Boilerman. There’s some confusion between Swervedriver and Skrewdriver. Someone gets kicked out of Chicago hardcore. There is a list of plausible bands names, some good, some great. There are songs about Die Hard. What happens when you’re too pop for hardcore and too hardcore for pop? This is life after and during straightedge. Sort of. It’s a great read.

One Punk’s Guide to Bike Touring: John Miskelly takes a break from writing and ventures into the world of bike touring. He cycles, but he’s not a “cyclist.” This is one person’s practical guide to going on a bike tour for the first time. This isn’t a comprehensive guide from a professional, but a funny and entirely reasonable approach to bike touring from a punk rocker. What should you bring? How do you survive? Where do you sleep? Bring a book (Kindles can go fuck themselves). A good read for the both the sporty and the lazy.

Peeple Watchin’: Nasrene Kordani and Gary Bonetti interview Peeple Watchin’. Boston bred but Portland bound, Peeple Watchin’ are a band that self-describes as queer punk that’s poppy. An irreverent and illuminating interview that spans first show experiences to experiences of being a trans person on tour. Someone gets MRSA on their face. Great stuff all around.

Sean Carswell is chewing on the Sugar Stems and thinking ’bout contradictions.

Jim Ruland continues on his book tour and revisits some old haunts. He is offered LSD...

Ben Snakepit looks fondly back on his poop-filled drawers.

Liz Prince is picking the label off and putting it where it belongs.

Cassie J. Sneider has been rocking (or something approximating it) since high school.

Designated Dale looks at four albums that came into the world at the same time as him.

Art Fuentes is trying to find his little furry friend.

Kiyoshi Nakazawa thinks there’s a conspiracy behind your hot sauce.

Nardwuar is on deck with the Wu-Tang Clan (RZA) and talks about their favorite flicks.

Adrian Chi yet again finds the cathartic nature of playing music to combat living in a world of shit.

This issue is dedicated to the births of Ottawians Joey Marc Collister and Nicke Williams.

And to Willa (1994-2014). Best cat ever.
Thanks to everyone who donated last year. We appreciate all of your support in 2014.2015 is looking like it’s going to be a great year. With great punk music comes great responsibilities. In ruckus we trust.

I’m a punk,
I’m a rocker,
Let me drink my beer.
–Bird Strike