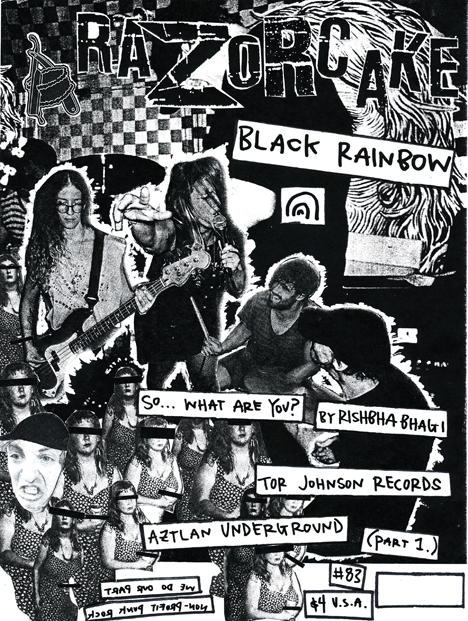 Razorcake #83 from 2014 featuring Black Rainbow, Aztlan Underground, So… What Are You?, and Tor Johnson Records

Black Rainbow: Black Rainbow features members of Allergic To Bullshit, Shotwell, Tulsa, and Onion Flavored Rings. Ivy Jeanne and Erica Dawn Lyle are a force to be reckoned with. Every band they’ve ever been in has been amazing. Black Rainbow is no exception. Lauren Denitzio talks with the band about touring, their concept record (a group of queer freak utopian punk survivors living in the eye of a hurricane), and doing environmental research in the Great Smoky Mountains. A must read.

Aztlan Underground: This is the first part of a lengthy, spectacular interview with Aztlan Underground by Jimmy Alvarado and Todd Taylor. From the backyards of East L.A. and the San Fernando Valley, Aztlan Underground has been blending hardcore punk and hip hop for over thirty years. They’re considered one of the linchpin bands of the ‘90s “Chicano Groove” scene. Jimmy digs deep and uncovers some pretty amazing tour stories (including pissing on Christopher Columbus’s doorstep). It’s a detailed portrait of one the most influential and important bands from Los Angeles.

So… What Are You?: What’s the overlap between DIY hip hop and DIY punk rock? What makes these two scenes attractive to second generation immigrants? Rishbha tells her story of growing up in Canada as the child of Indian immigrants and her exposure to punk and hip hop. She interviews other second generation immigrants involved with both DIY hip hop and punk to learn about their experiences and relate them to her own. What is culture? After reading this, you’ll be a little closer to having an answer.

Tor Johnson Records: Paul J. Comeau interviews Tor Johnson Records founder Paul Dechichio. What’s it like running a record label for over ten years? Is it hard to juggle personal relationships, musical projects, and running a label? What are the obstacles that DIY labels are currently facing? Learn more.

Jim Ruland is on tour with his new novel Forest of Fortune.

Rev. Nørb is talking epistemology with Siri and trying to hit some non-Flinstonian bedrock.

Designated Dale was more of an acquaintance of Johnny Ramone.

Rhythm Chicken is talking poop with a ruckus-covered soup bowl.

Art Fuentes is proud of his daughter. Tear.

Nardwuar chats with Katie Crutchfield from Waxahatchee. They did not eat mushrooms. I promise.

Adrian Chi ate the seeds of the ghost chili and it did not taste like candy.

Kettnerd wants to give No Babies the credit they deserve.

The best way to never miss an issue of Razorcake is to get a reasonably priced subscription delivered to your door.