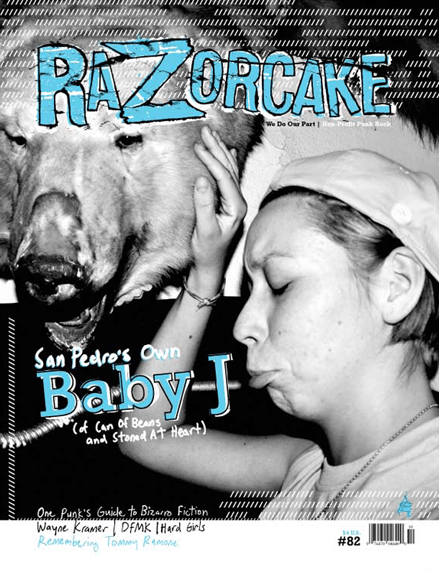 Razorcake #82 from 2014 featuring Cody Liam (Can Of Beans, Stoned At Heart), One Punk’s Guide To Bizarro Fiction, Wayne Kramer, DFMK, and Hard Girls

Cody Liam: Todd Taylor, Simon Sotelo, and Bianca get to know the unstoppable Cody of Can Of Beans and Stoned At Heart fame. Life is complicated and you can end up in places you swore you’d never go. Is identity a thread that you follow from adolescence to the present or is it something that is always being defined by your choices and actions? Great people don’t always make great music, but holy shit lookout when they do. Cody is smooth, confident, and one hell of a songwriter.

DFMK: Rene Navarro and Daryl Gussin get wild with Tijuana’s DFMK. Live (?) grenades, machetes and X-Acto knives on the beach, skateboards and tanks on the freeway, Charlie Brown life lessons, American burgers, and the looming presence of the Mexican/American border. Needless to say: this is a great fucking interview.

Hard Girls: Hilarious. This interview is hilarious. Sean Arenas and Todd Taylor interview Hard Girls and hilarity ensues. The sommelier is drinking Bud Light Lime. You can still pee when you’re depressed. Mike is (officially) the best guitar player in San Jose. Falling asleep at a random house on tour to Tank Girl while a loop of Family Guy plays terrifyingly loud from the next room all night long. A must read.

Sean Carswell is waiting for the train with a yeti and no financial reward.

Jim Ruland is on acid and talking to the giant bloated baby head of Hunter S. Thompson.

Liz Prince is going to comic conventions with her pants on.

Rev. Nørb is imagining a world without “Blitzkrieg Bop.”

Designated Dale learns about the death of Tommy Ramone.

Rhythm Chicken celebrates the life of Tommy Ramone with some wiggish ruckus.

Art Fuentes is petting his little pet until it squirts.

Kiyoshi Nakazawa is a liar and a sleep kicker.

Kari Hamanaka is still trying to figure out what she is, so stop asking.

Adrian Chi illustrates the highlights of the most recent Spokenest tour.

Nardwuar gets down with Bushwick Bill and examines his toe tag.

This issue is dedicated to Tommy Ramone. Today your love, tomorrow the world mon frère.