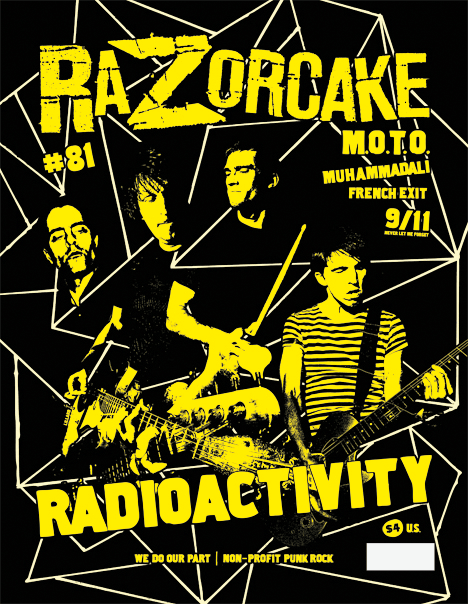 Radioactivity: Seals are washing up on the coast of California. The wake of the catastrophic events at Fukushima are still rippling through the Pacific. We’re watching protons decay, positrons emitting, the quark epoch finalizing. What’s to be done? Radioactivity may be the most articulate response to a question nobody was asking. What happens when you taken phenomenal talent, genuine love of a genre, precision, thoughtful restraint, eerily catchy, yet organic sounding harmonies, and infuse it into wax? You have one of the greatest records ever made. Period. Todd Taylor and Daryl Gussin talks with the alchemists responsible for this gold record (gold no matter how many they sell).

M.O.T.O.: Scott Bass chats with the founding and only consistent member of M.O.T.O., Paul Caporino and new bass player/new wife, J.V. McDonough. Is Paul the J.D. Salinger of punk? “Why so many songs about penises?” “How can you explain having a glorious mop of silver hair at fifty when other rockers go bald at thirty?” These questions all get answered. And some more pertinent to the rock get answered as well.

Muhammadali: The unstoppable Kevin Dunn and the easier to stop Todd Taylor shoot the shit with the brilliant, artistic fuck-ups in Muhammadali. A band like Muhammadali sounds like they come from Texas. Not because they sound like a rodeo, or Willie Nelson, but because they sound like survivors: survivors of the climate, the culture, and the creativity that comes from that mentality. It’s harsh and beautiful.

French Exit: I don’t like writing laughter out as words, but this interview is hahahahaha…. That’s all that needs to be said about it. Well, maybe not all that needs to be said about it. French Exit was trying to sound like Hootie and the Blowfish. I’m really glad they failed, because their particular brand of punk rock is better than any blowfish calypso caterwauling. Todd Taylor and Garrett Barnwell exchange witticisms and fight stories with the one, the only, the non-French, French Exit.

9/11, Never Let Me Forget: You’re probably more racist than you think you are. After 9/11, the world became a much different place for all of us. For some of us, a lot more different. Donna Ramone with equal parts humor, I-can’t-believe-the-stupidity-I-routinely-have-to-deal-with, and anger, explores how her world changed post-9/11. This is a must fucking read.

Ben Snakepit is forty and still trying to fit in.

Liz Prince tells you how she’s spending her summer.

Cassie J. Sneider does not feel judged by pizza. Acceptance is the most delectable topping.

Rhythm Chicken has a degree in math and a master’s in ruckus.

Art Fuentes is now for sale!

Kiyoshi Nakazawa is emitting protons at an accelerated rate.

Nardwuar gets down with Bushwick Bill and examines his toe tag.

Designated Dale spends five dollars at the Magic Mushroom and is never the same.

This issue is dedicated to Violet Pinkel. Congratulations Crystal and Bill!