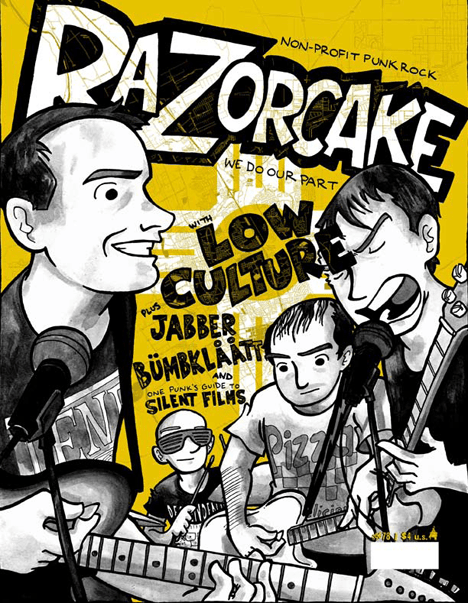 Razorcake #78 with Low Culture, Jabber, Bümbklåått, and One Punk’s Guide to Silent Films

Cover design by Mitch Clem and watercolored by Nation of Amanda

Low Culture: We spend our lives surrounded by screens. Whether they’re physical, emotional, or digital, they separate us from the mosh pit. Have you ever been in a band with a street punk who snowboards? Has Jeff Burke ever told you to keep working on it? Those aren’t rhetorical questions. Low Culture is definitely a desert band. They’re caustic, darkly numinous, and teeming with life. They’re also fucking hilarious and hard working. Let the record stand: Low Culture is a punk band.

Jabber: Kevin Dunn and Todd Taylor took a break long enough at Awesome Fest to get Jabber to elaborate on the nuances of bowling, pancakes, and the slippery slope of the cowbell. They discuss the spinning plates of being in a touring band and everyday life. They’re doing gymnastics at birthday parties, watching hamburger videos, and slinging vinyl. They’re unabashedly pop punk and don’t condone the six chord songs. Is that a big zit or is that a nipple? Read on.

Bümbklåått: Rene Navarro and Todd Taylor sit on the fence between Tijuana and San Diego to get the truth as Bümbklåått sees it. These dudes have some serious stories to tell about the veritable fuckstorm that is the border and being in a band that lives and operates on both sides of it. They’ve managed to make the best of a shitty situation, offering nachos and Jagermeister to friends, punks, and lush local officials. Bümbklåått is one of the most pants-dropping bands I’ve ever seen live. They’ll make you throw the horns and throw your friends around till it’s time to pay the I-don’t-remember-ordering-that-many-Fireball-shots-tab. Little Debbie, this one’s for you.

Sean Carswell is having a midlife crisis and playing Pac Man.

Jim Ruland spends his Halloween in a tow truck. He may not offer you candy, but he’s got a fist full of empathy.

Liz Prince goes to Green Day University and majors in Sociology with a minor in Ethics.

Ben Snakepit puts on his nostalgia spectacles and provides an etymology of the Snakepit.

Cassie J. Sneider is not a qualified dietician, but would make a great life coach. There’s power in the blood kids.

Rev. Nørb is swimming in his jeans and pulls the permed wig off of the sausage rock.

Art Fuentes has a religious experience and realizes he’s got enough Jesus.

Designated Dale goes all Dan Brown on Johnny’s Mosrite. A theft. A legend. A mystery.


This issue is dedicated to the memory of Wanda Coleman