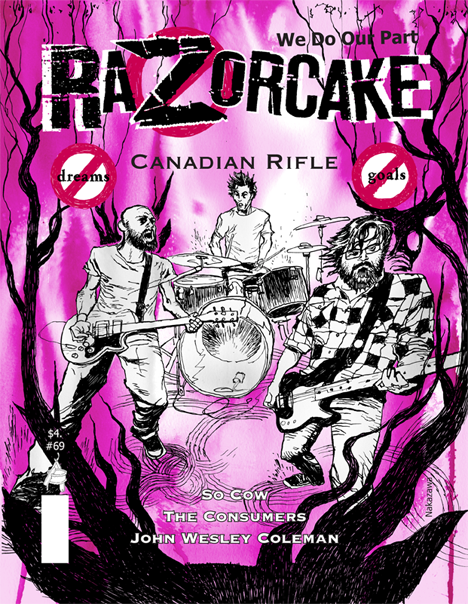 Cover by Kiyoshi Nakazawa
Based on photos by Patrick Houdek

Canadian Rifle: Interview by Todd Taylor. Gritty Midwest punk that’s just a little off. Breaking rules and their own hands, they don’t even follow the conventions of their hometown’s pizza.

So Cow: Interview by Kevin Dunn. Solo songwriting turned full pop indie punk band; they can’t even be contained to one country.

John Wesley Coleman: Interview by Ryan Leach. Straight from Texas, he tells us he kept failing trying to write songs. If this is his definition of failing, we hope he never succeeds.

Sean Carswell is back in the USSR.

Amy Adoyzie is hanging in there.

Liz Prince prefers to be alone.

Kiyoshi Nakazawa watches what he eats.

Mitch Clem loves his puns at any cost.

And a ton of reviews to help you ignore that it’s ass-hot out.

This issue is dedicated to the memory of Uncle Mike and Bowie the Cat.

It’s also a celebration of the marriages of Samantha Beerhouse and Mark McBride and Josh Brown and Dalyn Luedtke.

///
The best way to never miss an issue of Razorcake is to get a reasonably priced subscription delivered to your door. Click the link below.