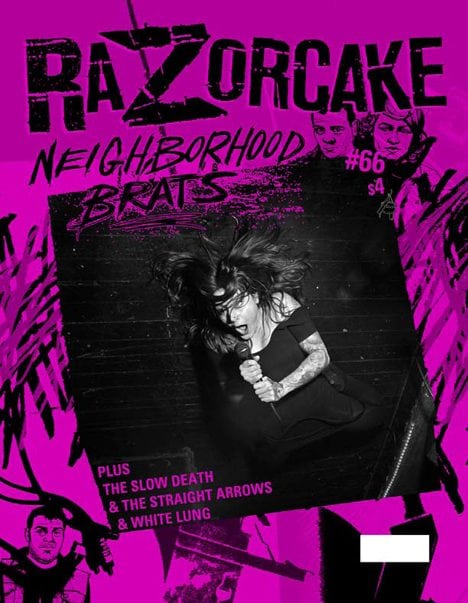 Neighborhood Brats: Interview by Todd Taylor. The brain trust of Jenny Quitter and George Rager, proving punk’s the well spring and everything else is just modifiers.

Slow Death: Interview by Megan Pants. From the ashes of Pretty Boy Thorson And The Incredibly Handsome Cowboys comes this new incarnation of basically the same band. Oddly enough, most of their shows follow the plot of The Muppet Movie.

Straight Arrows: Interview by Ryan Leach. They are from Australia. They play some pretty crazy, great ‘60s-inspired psych rock. You’re allowed to do that when you live in Australia.

Sean Carswell is a book-writing carpenter.

Jim Ruland has seen a lot of bars.

The Rhythm Chicken still has some cluck left in him after all.

Adrian Chi has no regrets.

Amy Adoyzie has learned a thing or eighteen.

And tons of reviews for when you’re done either shoveling snow off the ground, or tacos into your mouth.

This issue is dedicated to the memories of Solomon Burke, Chalmers Johnson, and Václav Havel.