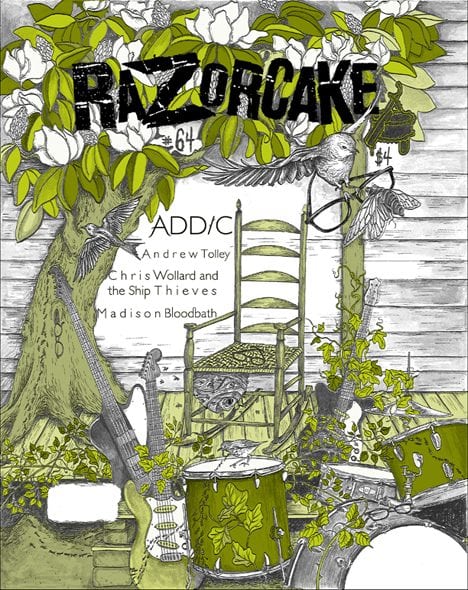 Click to read Razorcake Issue #64 as a PDF.
If you don’t have Adobe Reader, you’ll need it, and you can download it for free here.

ADD/C: Interview by Todd Taylor. They may have never played with Mini Kiss, but they’re one of the best punk bands going. Or, maybe they did play with Mini Kiss. They don’t have a website so we can’t be sure.

Chris Wollard and the Ship Thieves: Interview by Replay Dave. They’ve got a lot of guitars, but that’s what happens when you’ve got a lot of talent. They’re practically a Gainesville institution

Andrew Tolley: Interview by Ryan Leach. Even on the opposite side of the world in New Zealand, there’s tons of stuff going on musically, and this guy’s at the forefront.

Sean Carswell is an old punk but a young soul.

Jim Ruland has a lot of respect for salmon.

Maddy Tight Pants is a champion.

Mitch Clem was the ultimate punk.

Nardwuar talks to the Pack A.D. (from Canada).

The Rhythm Chicken had a busy summer.

Amy Adoyzie believes in deodorant, and not those weird “crystals.”

And a burrito-load’s worth of reviews, to boot.