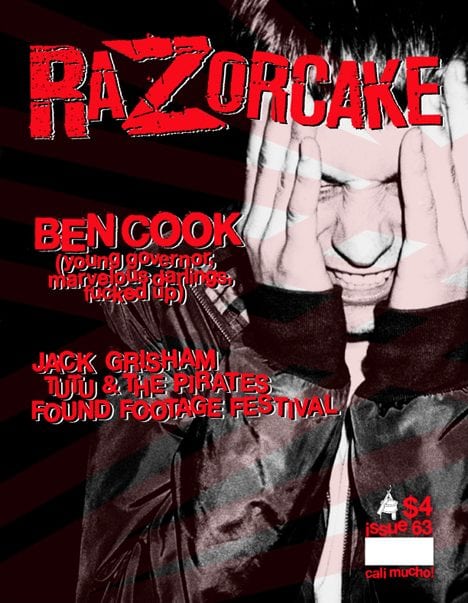 Ben Cook: Interview by Todd Taylor. If someone had records by the Marvelous Darlings, Young Governor, Yacht Club, and Fucked Up, you’d probably have some good things to say. This guy’s been in all those bands, and has plenty of things to say.

Tutu & The Pirates: Interview by Joe Losurdo. The original Chicago weird dudes are back. Is it any surprise that a band this nuts needed a thirty year rest?

Found Footage Festival: Interview by Billups Allen. Before there was YouTube, these guys found all sorts of weird stuff on video tapes. And they’re still doing it.

Jack Grisham: Interview by Julia Smut. The original TSOL frontman. Some people think that people like Charlie Sheen are badass. Those people would cry if they met Jack Grisham.

Sean Carswell can take a lot of art.

Jim Ruland will get you through the night.

Rev. Nørb is more deserving of a bobblehead than Dwight Schrute.

The Rhythm Chicken is hard at work living the Americhicken dream.

Ben Snakepit is getting married.

And plenty of reviews to help you find some to listen to out on the porch.