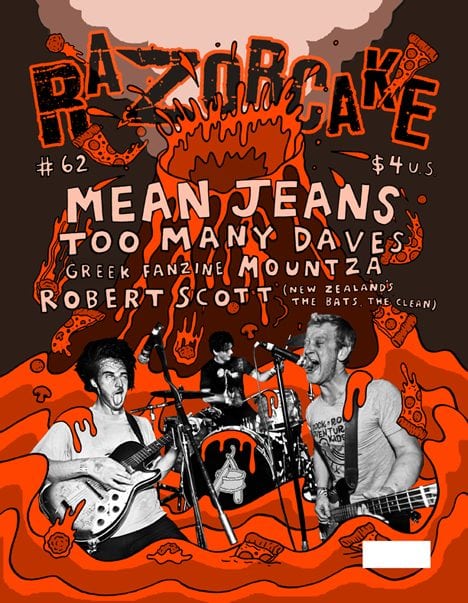 Mean Jeans: Interview by Todd Taylor. How did it take so long for a band this inspired by the Ramones to be this stupid? And who would’ve thought that the results would be this genius?

Too Many Daves: Interview by Todd Taylor. A great man once said “I don’t know what sports those guys are playing, but I want season tickets.” And if there was a World Series for “Dudes,” these guys would have the Commissioner’s Trophy.

Robert Scott: Interview by Ryan Leach. The prolific New Zealander talks and shares some stories from the many bands he’s been in over the years (The Clean and The Bats, for starters).

Mountza: Interview by Matt Average. If you were to judge by yogurt alone, you would think that a Greek fanzine would be rather plain. This one proves that you couldn’t be further from the truth.

Jim Ruland is not the dude you’re looking for.

Mitch Clem looks like he’s not happy, for not quite as serious reasons.

Art Fuentes gives you a toy!

The Rhythm Chicken is the iron chef with an iron liver.

Ben Snakepit lists some of his favorite movies.

Kiyoshi Nakazawa would rather order the salad.

Adrian Chi has a lot going on.

And tons of reviews for your post-rapture reading pleasure.