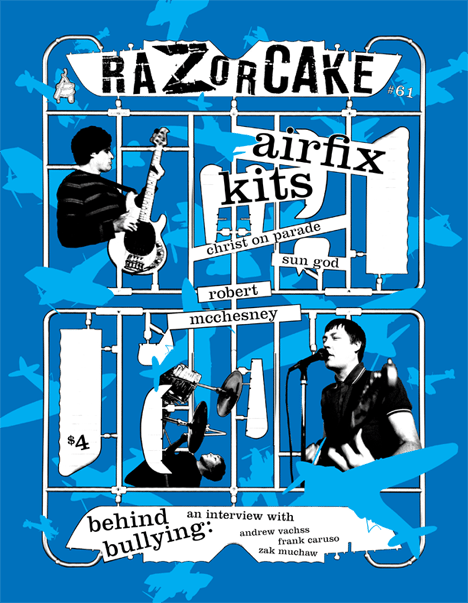 Airfix Kits: Interview by Tim Brooks. They may be getting old, but they’re still one of England’s best bands. Especially considering they’re from the Bay Area.

Behind Bullying: Interview with Andrew Vachss, Frank Caruso, and Zak Mucha: By Trey Bundy. Here at the ‘Cake, we’re tired of hearing “It gets better,” so we just like to think “sometimes everything isn’t totally shitty.”

Christ On Parade: Interview by Matt Average.  The classic Bay Area thrash band is back, and hard. Though the question remains, do you ever really go away when you don’t even play your last show?

Sun God: Interview by Ron Kretsch. What happens when you mix up every kind of heavy music imaginable in Cleveland? Plus a little bit of slightly-less-heavy music? You get this.

Robert McChesney: Interview by Ryan Leach. We know he’s into media activism, in addition to being a former fanzine guy. By our logic, we can only assume he’s also into nachos and beer like us.

Sean Carswell is living in the real world.

Jim Ruland is reminding you that he’s still prepared for taco prohibition.

Amy Adoyzie agrees that when Bugs Bunny dressed up like a girl bunny, he rocked that shit.

Nardwuar finds out from Charlie Murphy “just what did the five fingers say to the face?”

Designated Dale is 49% cranky bastard, 51% lovable son of a bitch.

The Rhythm Chicken is ice cold.

Rev. Nørb is always ready for some football when the Packers are involved.

Kiyoshi Nakazawa hates everything except his dog.

And just like the blossoming that comes with Spring, a shit ton of reviews.