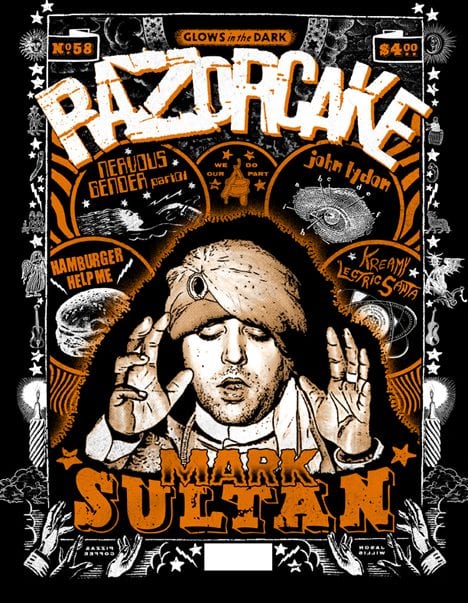 Cover artwork by Jason Willis
(And, no, the cover doesn’t glow in the dark.)
Cover photo by Canderson

Mark Sultan: Interview by Ryan Leach. This guy has done a lot over the years. Maybe you would too if you skipped the practice in favor of just playing in some of the most talked about garage rock bands ever.

Hamburger Help Me: Interview by Aphid Peewit. Lower than lo-fi, these Minneapolis cats sound like The Mummies only louder, and aren’t afraid to talk scat. No smart ass comment can explain how great this band is.

Nervous Gender: Interview by Jimmy Alvarado. Part I.  Another classic LA punk band. Just in time for them to reunite. The only thing you need to know is “Future.”

Jim Ruland knows a thing or two about partying.

Mitch Clem is into Spider Man more than you are.

Ben Snakepit is full on MAME-core.

Art Fuentes joined what will likely be the most rocking band of all time.

The Rhythm Chicken is movin’ on up.

Designated Dale reflects back on the golden days.

Adrian Chi can’t take the humanity (or lack of).

Gary Hornberger is starting his own neighborhood watch program.

And a stuffed burrito’s worth of reviews.

This issue is dedicated to the memories of Stiff and Derf Scratch.

///
If you enjoy and value what you see, read, and hear on Razorcake.org, please consider a tax-deductible donation for our continued survival.