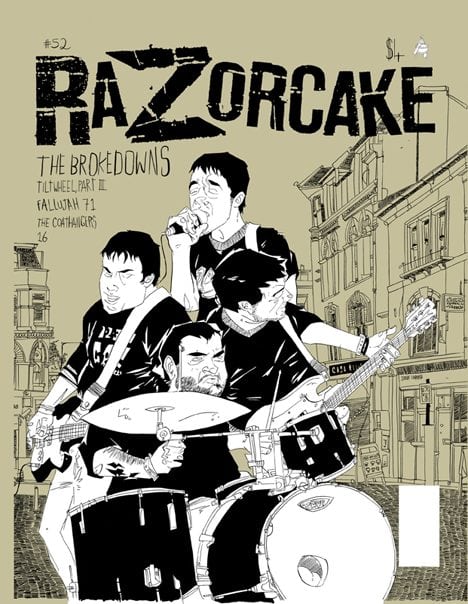 The Brokedowns: Interview by Megan Pants. They come recommended by The Arrivals and Dillinger Four, sound like both of them at once, and seem to know a lot of terrible people. (http://www.thebrokedowns.com/)

Tiltwheel, Part III: Interview by Todd Taylor. Seeing as this is the band that’s been referenced no less than three times every issue, here’s part three of this interview. This time with J. and Paul. (https://www.facebook.com/tiltwheel/)

16: Interview by Matt Average and Donofthedead. Brutal metal from L.A. who, conveniently enough, have actually been around for sixteen years. (https://16theband.bandcamp.com/)

The Coathangers: Interview by Chris Peigler. Arty jams that manage to be somewhat political, without being political. (https://www.facebook.com/TheCoathangersATL/)

Fallujah 71: Interview by Lisa Weiss. Angry young kids. We mean it. They’re not going to be even close to seventy one any time soon.

Jim Ruland is a fan of drinking on trains.

Maddy Tight Pants is a fan of political scandal.

Mitch Clem somehow managed to turn in a column.

Ben Snakepit is the king of beers.

Rev. Nørb nearly killed himself during the Boris The Sprinkler reunion.

The Rhythm Chicken is banned from Baltimore, but not the sea.

Designated Dale is getting married!

Kiyoshi Nakazawa teaches us how to fart.

Nardwuar gets a glimpse of life on the d-list with Kathy Griffin and Lily Tomlin.

Gary Hornberger knows his shit about golf, and comics.

And of course, a double decker train’s worth of reviews (that’s a lot).