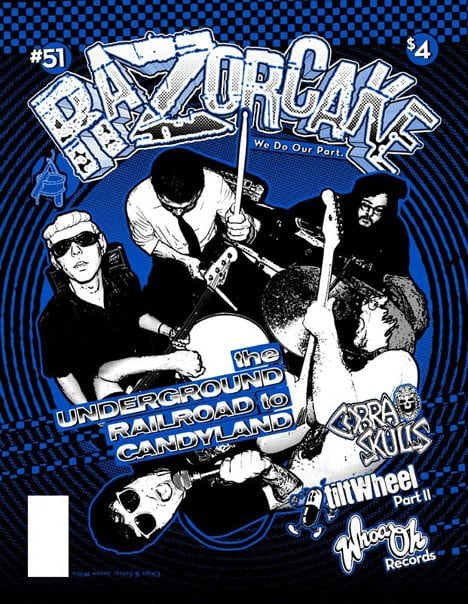 Whoa Oh Records: Interview by Joe Evans III. There’s a good chance you own something he put out, now what makes Jonnie Whoa Oh tick. (http://www.whoaohrecords.com/)

Cobra Skulls: Interview by Mr. Z. Politically charged, poppy/ska-influenced punk rock that’s similar to Dead To Me, Against Me!, and Against All Authority. They’ve even got an Argentinean dude in the band, and manage to not talk about soccer the whole time. (https://www.facebook.com/cobraskulls/)

Tiltwheel, Part II: Interview by Todd Taylor. Like their drinking budget, this interview was simply too big. Part two of two. (https://www.facebook.com/Tiltwheel-45860575871/)

Razorcake Remembrance from the Trenches: A compilation of contributors stories and anecdotes with the magazine over the past few years.

Maddy Tight Pants has heard of some weird protests.

Ben Snakepit gets R. Kelly’d by a dog.

Rev. Nørb has made the big time.

The Rhythm Chicken plays his biggest gigs ever.

And the whole mess of reviews you’ve come to expect. We hit FIFTY ONE issues, and still do what the fuck we want.