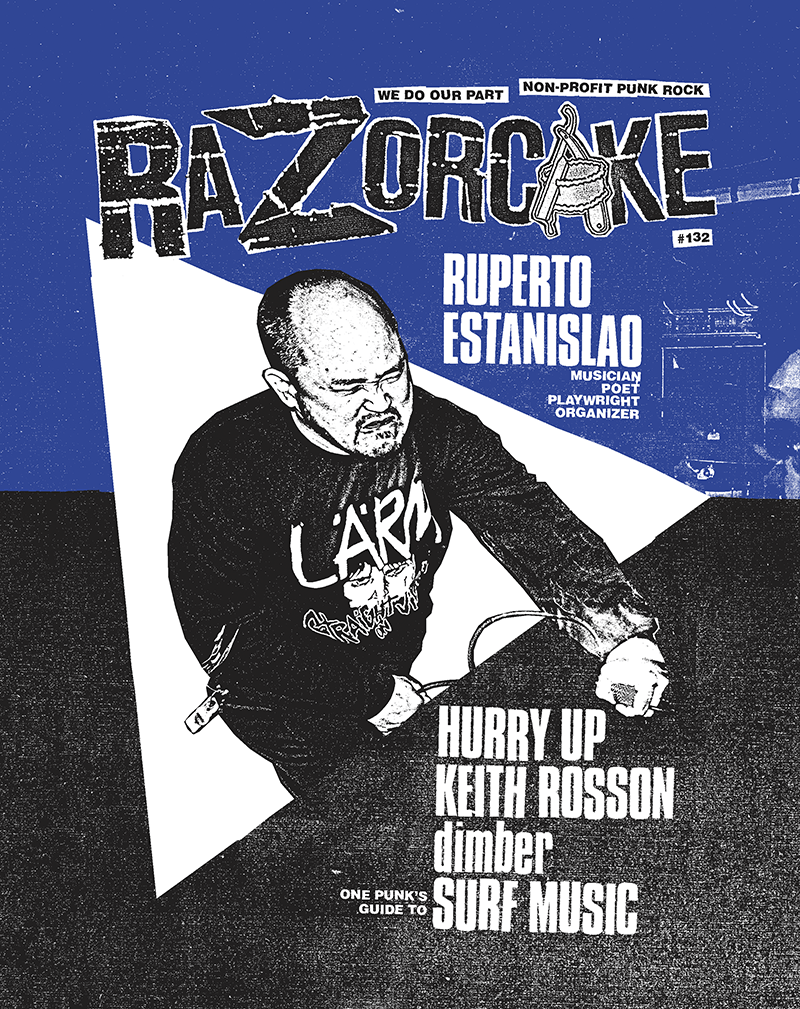 You really do just get this one fucking life. And who knows if “leaving your mark” is even worth a damn in the end, but there’s something to say for improving your immediate surroundings. Creating physical space for your beliefs and connecting with others in meaningful ways. This idea of utopian world building should never leave our brains. Community heals society’s wounds. And the world of Ruperto Estanislao and Aklasan Records is something that’s righteously healing, while also just being fuckin’ fun!

I’m incredibly thankful he took the time to share his story. There’s so much to learn. So much to be inspired by. An experience that will differ from many of ours, but is boundlessly relatable in spirit.

There’s this harmful tendency, when trying to feel like we know the whole history or fully grasp the narrative of punk/hardcore, to narrow the focus, but I guarantee you there’s more. There’s always more. We’ll never stop learning, so let’s stop pretending like we know it all. And it doesn’t matter how challenging it may feel—like Ruperto says, “Just stick with it!” –Daryl

The three heroines of Clueless, Cher, Dionne, and Amber, walk into a gay bar. That’s either the start of a very ’90s joke or an event perfectly soundtracked by the band dimber. They walk into a gay bar that hosts drag shows and punk bands, where the patrons curb-stomp Nazis after Neil Diamond karaoke. That’s the universe dimber lives—no—thrives in. They illustrate what happens when millennials take pop punk and grunge and put it through a self-care filter. The collaborative four-piece is a staple of Los Angeles DIY, who co-released their debut album Always Up to You just a few months ago with Dead Broke Rekerds. We got together one evening to talk about their formation and intentions, winding our way through the topics of rainbow capitalism, cis-hetero-normativity, and an unlikely introduction via Mountain Dew. They’re just as likely to bring up Buffy as they are queer theory, which is probably why I like them so much. –Lauren Denitzio

Hurry Up interview by Martin Wong

Hurry Up is a super cool power trio comprised of members of two other beloved power trios from the past. As a huge fan of Maggie Vail’s old band Bangs and Kathy Foster and Westin Glass in The Thermals––as well as an acquaintance of Maggie from my past life as a zine editor while she worked at Kill Rock Stars––I crossed the lines from guy who loved their first album, to the pest who keeps asking them to play a show until it actually happens, to friend. I was stoked when their second album, Dismal Nitch, came out earlier this year. It’s a joyful mix of Wipers riffs, Dead Moon and Adolescents shout outs, and punk rock ‘n’ roll fun that calls out parasites and creeps and uplifts weirdos. With Maggie relocated to Knoxville, Westin moving to Albuquerque, and Kathy holding it down in the Rose City, we caught up on our laptops as they make plans to reunite on the road and bring their angry, uplifting, and catchy noise to the people. –Martin

There’s this story towards the end of Keith Rosson’s newest book, Folk Songs for Trauma Surgeons, where the soul-shattered narrator stands in an alley before a man who is zip-tied to a dumpster, this meth-addicted former UFC fighter who had beaten the narrator to near death just weeks before over a few stray words at a bus stop. It’s a heart-wrenching moment, and just as you’re preparing yourself to watch one broken human take his revenge on another broken human, the unthinkable happens. The narrator begins singing. Instead of beating the ever-loving shit out of the man zip-tied to the dumpster, this man who had ruined his life, begins singing. His arms and fingers in splints and bandages, his face still swollen, just singing gibberish into an alley. Something new, “a brick through a window… instead of a winding river.”

As a reader? I felt hope. A strange sort of hope, clawing its way to the surface in what seemed like a dark and pointless universe, resilient in spite of everything. That’s the sort of writer Keith is. He crushes you, and in the totality of true darkness, he leaves you with a truth you can recognize. It’s a wondrous thing to behold.

Long time Razorcake readers will recognize Keith Rosson’s name. He’s been interviewing bands, designing covers, and reviewing demo tapes since damn near Razorcake’s inception, all for free, like every other Razorcake volunteer, because he believes in this stuff. Because he’s a lifer.

Coming up in the Pacific Northwest zine world of the mid-’90s, his Avow zine merged punk, poetry, and prose in a way that could make grown humans (like, uh, me) weep openly on the bus. His punk bands were like his writing—raw and wounded, utterly human, and really fucking good. His graphic design and illustration work found its way onto T-shirts and albums for bands like Against Me!, Ten Foot Pole, Shitty Weekend, hell, even Green Day. His bizarre and distinctive paintings, a mixture of comics and comedy and satire and tragedy and literary metaphor, wound up in galleries and on album covers.

Not bad for a dude who’s legally blind.

And in the past decade? That’s when his writing went from good to remarkable. No joke. NPR called The Mercy of the Tide a “beautifully gloomy meditation on how lives tangle around each other… how modern destructive evils displace the ancient ones embedded in our bones.” The Portland Mercury called his stuff “equal parts haunted, hilarious, and deeply human.”

He’s got this remarkable knack for writing worlds into creation that are dark, magical, horrific, clear eyed, and yet, somehow, still hopeful. And guess what? The corporate types finally got something right. He recently signed a multi-book deal with Random House Publishing.

Most importantly, Keith Rosson is the kind of person you’re proud to know, proud to read, proud to call a friend.

I talked to him via Zoom from his home in Portland, Oregon, where he lives with his partner, their two adopted kids, and their weird looking dogs. –Rob Taxpayer

Here’s a bit of trivia. One of the first bands the two founders of the Razorcake print zine went to see together was Man Or Astro-Man? Todd and I first met in Flagstaff, Ariz. in 1994. At the time, the local live music scene was classic rock cover bands and Grateful Dead wannabes. As bad as this may seem, it was worse. I was starved to see live music that moved me.

In August, 1995, Todd got word that Man or Astro-Man? were playing in Phoenix, which is two hours south of Flagstaff. This being pre-internet days, we weren’t able to buy tickets in advance. We made plans to get to the venue five hours early. We figured that would be enough time to buy tickets before the show sold out. The only hiccup came on the drive down. An overturned semi closed the I-17 for two hours. But no worries—we still got there three hours early and got in. Just getting in was my second favorite thing about the show.

My favorite thing about the show was everything that happened between the time Man Or Astro-Man? got on the stage and the time when they left. They were all energy and madness. I only stopped dancing once, and that was to catch a Little Debbie snack cake that Starcrunch threw into the crowd.

Donna Ramone explains the difference between inflammatory memes in detail. Don’t be a hyena-jackass on the internet incapable of listening. (instagram)

Jim Ruland memorializes José Valdez, a man who was without a home and was in a great deal of pain, but always asked Jim what he could do for him. (instagram)

Rev. Nørb takes his busted TV, duct tapes it, and puts in his front yard, especially celebrating the hot pink and turquoise of the “Progress Pride flag,” the only Pride flag he swears fealty to. (instagram)

From: (No title)
We miss the blistering desert sun.
The small of burning bones and trips to the Molino.

The flesh of Durango. –Sonia Hernandez

Rhythm Chicken’s manifesto? is “I do it for the weird.” Rave on Putin’s grave and keep an eye above for birds of prey during parades. (instagram)

Bianca road trips in a time bomb of emotion with old friends. Everything falls apart in Indiana. There are two dogs and a cat in the car.

This issue is dedicated to the memories of Jed Schipper, D.H. Peligro, Terry Hall, and Mike Davis