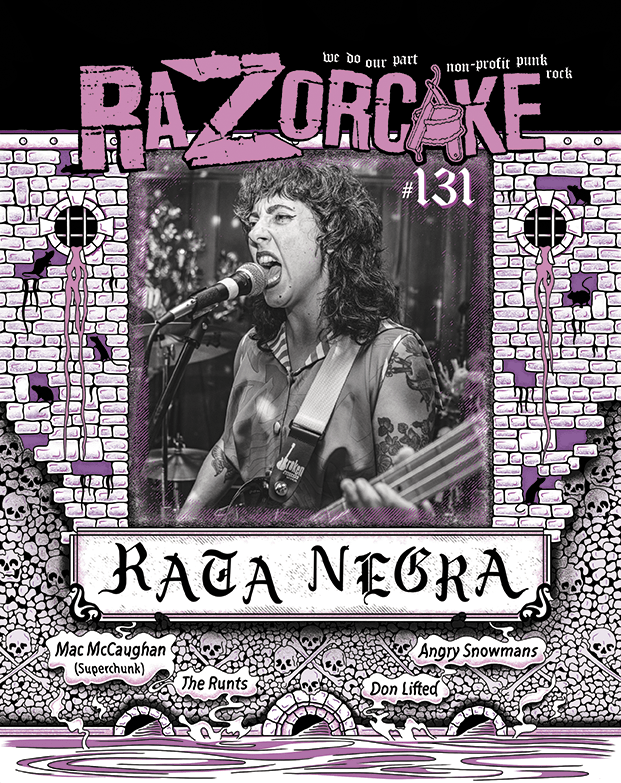 I still believe the best music is alchemy and magic. It takes ordinary, raw materials—instruments almost anyone could buy at their local music store—and makes something jeweled. Something precious. Something rare. That’s my way of saying Rata Negra, from Madrid, Spain, makes punk music I really like while pushing the form forward.

On first listens, the most obvious element to me is Violeta’s voice—strident, clear, and enunciated. Think all three Soviettes as one. Think Jenny of Neighborhood Brats, Penelope of The Avengers, and Alice Bag as her company. I’d first listened to Violeta as the vocalist of the great Juanita Y Los Feos and her voice invites singalongs, hip swaying, and hair shaking.

Being a dum-dum monolingual, it wasn’t until I translated the lyrics to Rata Negra’s three full-length albums I discovered the upbeat brightness of the music ran counterpoint to the lyrics’ darkness. The happiest-sounding songs were ruminations on death and dying—like “Cuando Me Muera,” “Nada Va a Permanecer Dorado”—and pop-surf magnets like “En La Playa” are the opposite of Gidget-bait, loaded with lines like, “Drugs and dead on the beach / Floating while you bathe / They are buried in the sand / while you get a tan.”

I also think the true power of a band is measured not only on initial impact—“fuck, this sounds great!”—but repeated LP-long listens providing even more rewards, continued evidence of deeper magic.

Since they’re a three-piece, there’s no hiding. I’m still convinced there are unseen hands pulling off some musical tricks in this band. Yep, yep, with close listening there’s the simultaneity of Rikk Agnew’s Christian Death-y disorienting darkness and his Adolescents shimmering brightness with an occasional surf undertow, all done by Fa, the single guitarist. (How, Fa? How?!) When I saw them live, my suspicions were confirmed. Pablo transforms into an octopus, menacing his drum kit with power and intelligent precision, arms blurred to four times that of an ordinary human. Anchoring the power triangle is Violeta, her bass roping around the songs into binding spells, her voice an invocation and incantation.

I used to take Superchunk for granted. I spent most of the 1990s listening and watching them with great regularity. Formed in Chapel Hill in 1989, they were anchored by Mac McCaughan (guitars/vocals) and Laura Ballance (bass). The original line-up included Jack McCook (guitar) and Chuck “Chunk” Garrison (drums), both of whom would soon be replaced by Jim Wilbur and Jon Wurster, respectively. In North Carolina, they were a dependable fixture of the musical landscape and I’d see them several times a year, either live, walking down the street in Chapel Hill, or once when I was buying a crappy Epiphone guitar at my father-in-law’s music shop in Durham. In that scene, Superchunk occupied their own unique space: more punk than their indie compatriots like Archers Of Loaf, Zen Frisbee, or Southern Culture On The Skids, but more arty and pop than bands like Pipe, Polvo, or Corrosion Of Conformity. They staked out their own plot and tended to it with care and determination, developing a sound and style distinctly their own. And the little label Mac and Laura founded, Merge Records, began releasing consistently solid albums, making it one of the more reliably stable labels in the alternative music universe.

Then, Superchunk suddenly went silent. Throughout the first decade of the twenty-first century, Merge Records flourished, but the band was largely dormant. I missed their high-intensity shows and the regular output of solid studio albums, such as No Pocky for Kitty, On the Mouth, Foolish and Indoor Living. Just as I was giving up hope, they released Majesty Shredding (2010). It wasn’t a return to form, but a stunning statement by a band that had gotten older, wiser, better, and angrier. It wasn’t a fluke, but an amazing leap forward and the beginning of a remarkable resurgence. They followed it up in 2013 with the equally brilliant I Hate Music. Around that time Laura was diagnosed with hyperacusis, a hearing condition that makes playing in a rock band an excruciatingly painful experience. Laura remained active in the studio, but her touring duties were filled by Jason Narducy. In 2018, they released the blistering What a Time to Be Alive. Fueled by anti-Trumpist sentiment, it just might be their most punk album ever. This year brought the pandemic-informed Wild Loneliness, a haunting album that turns down the volume but doesn’t diminish the anger, anxiety, or intelligence that has fueled the band’s impressive career. Now in their fourth decade, Superchunk shows no signs of slowing down and one should never take them for granted again.

The Runts interview by Daryl

Teenage rebellion becomes adult fury. The story of Northeast L.A.’s The Runts is humble, wide-eyed, and hell-bent on total annihilation. But what started as a stupid excuse to fight ripened into a lifelong battle with a world that itself is now determined and dedicated for self-destruction. Local leaders as crooked as the criminals they vilified. Newcomers to the neighborhood making big decisions no one asked them to make. A global health crisis and its divergent social implications. Regression. A city unfolding without concern. This is the setting of our story. This is the modern wasteland The Runts call home.

It starts too early. It epitomizes capitalism and consumerism at their absolute worst. (I’m looking at you, Black Friday.) It promotes a religion that I do not adhere to or respect in any form or fashion. And the fucking music: the same ten shitty songs done by every shitty popular music act. It seems inescapable. But it’s not. Because we’ve got Angry Snowmans.

Angry Snowmans’ music gives us something to celebrate. They take classic punk and hardcore songs and change the lyrics to be about Christmas, but from a unique, funny, punk perspective. Topics include struggles of the elves (“Santa Is a Fatso”), last-minute searching for a tree (“December 23rd”), getting in the holiday spirit, punk-style (“Somebody’s Gonna Get Their Halls Decked In”), and more. And it is all hilarious! From Thanksgiving to New Year’s Eve, listening to them makes the season tolerable, provides an ear-to-ear smile, and is the catalyst for Santa-sized laughs.

They snuck away from making toys at the North Pole to share their story, their process, thoughts on religion, the reason for bringing their Christmas spirit out every December, and how Esquire wants to introduce them to the world.
Essentially, what they do isn’t secret, it’s festive—FESTIVE!

In 2021, Oxford, Miss.-based Fat Possum Records released a unique and thoughtful hip hop record called 325i. Fat Possum is a diligent independent label known initially for championing a late generation of juke joint bluesmen and helping them pursue their craft outside the Southern bars and grocery stores where many performed almost exclusively for decades.

The author of 325i is Memphis, Tenn. rapper, musician, and visual artist Don Lifted. Lifted, however, was not pulled from regional anonymity. Lifted developed a fanbase with several self-produced singles and albums on Bandcamp. He also has a powerful collection of self-made music videos on YouTube, most of which were produced by Lifted and a few friends using laptops and from available equipment. 325i is his first physical release on a record label, but by the time the album was released, Lifted was already the author of a compelling body of work. I first heard Lifted’s music in the video for the album’s first single, “Lost in Orion.” A moderately paced and heavily distorted drum riff drives the song. Uncharacteristically upbeat guitar picking heavily drenched in reverb carries the melody. The primary riff is a head nodder for sure, but the lyrics are a rumination on loss:

Wake up every morning with a scent stuck to me
Anxiety and fears, all the years, waitin’ for me
Confidence in stones, ’cause the church lied on me
See myself in nothing but the ones I anointed.

The music is woven with elements of ambience combined with catchy stings of avant-garde rock. The vocals are occasionally manipulated to a Butthole Surfers-level of warble. The music washes into the atmosphere at a low pace. The songs are short but they can be menacing in the voyage. You can lose yourself in it a bit, but not without keeping your guard up a little.

Themes of fast living and bravado are sparse in the world created by Lifted’s songs. His unorthodox song structure and dedication to the visual medium make him something of an anomaly in the more marketable avenues of hip hop. The energy is calmly relatable more than danceable upshot. Lifted doesn’t bow to what commercial hip hop offers structurally, but pushes forward into the ethereal of what underground music represents as a forum. It’s reflective music that might have a hard time finding a groove on a typical hip hop bill, but might be at home alongside Spiritualized or Royal Trux, two legendary experimental bands who have moved their back catalog to Fat Possum.

The video opens with Lifted covered in golden glitter singing in front of a tinsel curtain. The second shot of the video is a shocking but inventively executed slow-motion tableau of a late-night lynching in the woods. The song’s soft, ambient features don’t follow a typical pop structure. Images of zombies, self-harm, large theaters in disrepair, and demons moving in the night make for a visually innovative video. There is very little linear narrative, but his metaphors come across strongly in his use of color and time displacement. His slow motion shots are analogous to Spike Lee’s floating walking shots or Scorsese using unorthodox sounds to express the struggle of a futile boxing match in Raging Bull (1980). It evokes a similar fear of the uncanny as Bill Gunn’s Ganja and Hess (1973). One running theme is these images have been cauterized in the sticky sweetness of the South.

Lifted and I agreed to meet at Crosstown Concourse: a massive, mall-like complex that used to be a Sears warehouse where I first saw Lifted perform live months earlier. He has a connection with the nonprofit Memphis Listening Lab, and they allow us both to conduct the interview in private, which is good, because it’s a hot week in Memphis, and Lifted and I both tend to mumble a bit.

Donna Ramone explores the wrinkles of the inter-state diaspora between California and Utah, including, but not limited to: “crick,” “pellow,” “melk,” Pioneer Day, and really different birds. (instagram)

Jim Ruland gets treated with dignity and respect by both homophobe bros and cops. Hah, just fucking with you. They throw beer cans at him and tell him to walk his bike to work, respectively. (instagram)

Sean Carswell signs up to Spotify, thanks the algorithm for all the great suggestions, and then buys $600 tickets for Blink 182. Hah, still fucking with you. He breaks down why The Whys? record is stellar and streaming services are all about the moneys. Because, capitalism. (instagram)

Rev. Nørb breaks Encyclopedia Brown and the Case of the Unicycle-Riding Punker Balancing a Peanut on a Butter Knife! The answer? “E/B.” (instagram)

“Do they ever wonder
About the people who left,
Felt abandoned by the scene,
Because of pieces of shit like them?

Art Fuentes examines the elephant in the room along with the Grand Old Party’s flies and shit. (instagram)

Michele Cruz Gonzales pledges to punk rock, not allegiance to the United States. “I wasn’t smarter than most kids. It’s just that my mom didn’t raise me to be a derpy robot.”