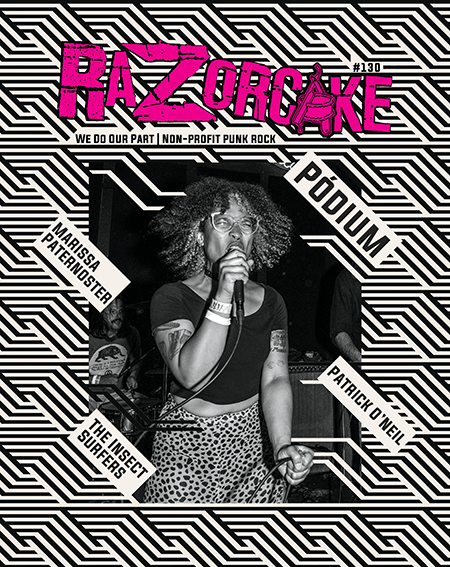 Take one, short read: I really hope this interview motivates people to check out Pódium from Valencia, Spain. They’re a hard band for me to fully encapsulate. In simple terms, they rule. I really think you should check out their self-titled LP and see them live. You’ll be richly rewarded.

Take two, longer read: You know you’re listening to a lenticular of a band—a band that vibrates between sounds, that inhabits several spaces at once—when it feels like an audio illusion, like they’re playing different songs depending on the angle from which you’re listening to them. Depth and motion are suspect. Equilibrium is wobbly. You are not in total control of the listening experience.

You know you’re listening to a black hole of a band when they remind you of so many other bands you like simultaneously, and then all of those other comparisons get sucked into a tight dot. It’s good to have coordinates. It’s better to have a destination and thrust.

Take three, longest read for people who will appreciate some punk-specific sign posts: The first time I listened to Pódium, they reminded me of the spirit and tightly wound power of the Tyrades, a band I’ve loved since I heard them in 2003 and have never stopped listening to. No other band has ever reminded me of the fangs and snarl of the Tyrades juggernaut. The stripping away of unnecessary fiddling to a glistening, pulsating core. The caged, stomping rage. The treble trouble and scratchy picking. The metronymic ass beating. So catchy and swinging while being blunt and icy. Both dance party and automobile crash. Pódium hits all the marks.

Live, they were riveting. África’s stage presence was predatory and apex. Nick was the evil genius/mad scientist on a Budget Rock guitar. Salva and Carmona became a four-stringed, two-sticked rhythm beast. They played like a band with nothing to hide, where you can see all the pieces snapping into one another. No smoke, no mirrors, no painfully obvious punk paint-by-numbers. Just full-contact power, realized and delivered.
Punk music still rules.

I got Screaming Females’ double LP Ugly shortly after it came out on Don Giovanni Records in 2012 and was immediately impressed: singer Marissa Paternoster’s vocals were utterly unique and fearless throughout—to say nothing of her face-melting guitar playing. I’ve seen the band eight times since then, dragging reluctant friends along to shows and watching them leave as converts to the band’s impassioned, relentless attack. In addition to being a completely kickass band musically, Marissa and Screaming Females have been road dogs since the jump, forming and fostering relationships with people in cities and towns across the world. They bring small bands on tour with them; they elevate marginalized voices. I can’t think of a better example of a band harnessing punk’s potential for good.

In addition to all her work in Screaming Females, Marissa is a talented artist. Her comics about the rock scene for The Talkhouse are funny, cool, and weird. She and Joe Steinhardt from Don Giovanni Records have been working on a graphic novel titled Merriment. And, Marissa recorded a recently released solo album called Peace Meter during the pandemic.

Marissa and I agreed weeks in advance to talk on June 24, 2022—the same day the Supreme Court revoked Roe v. Wade. I was still in shock when we started talking.

“Planet Earth’s longest-running modern surf band,” play surf music cross-pollinated with early new wave and primal rock‘n’roll, all tossed into a sonic stew. Being fans of the band for years and jonesing hard for the halcyon days of facemask-free fun, we approached co-founder David Arnson for some stories. We had the opportunity to sit down with the guru of all things groovy in his house, a rock’n’roll-esque hive that could also serve as a museum to lava lamps. We talked about the evolution of surf music and his life as a musician that originated in the pre-hardcore D.C. punk scene. It’s a musical career that has spanned over forty years, including playing a show with Joan Jett and Iggy Pop in one night.

Patrick O’Neil is a writer who went to prison for armed robbery. A punk, he stuck up banks in San Francisco to feed his heroin addiction. He eventually got caught. Prior to that, Patrick was the roadie and sometime road manager for Dead Kennedys, Flipper, T.S.O.L., Subhumans (U.K.), and the Dickies, crisscrossing the United States several times and the West Coast continuously throughout the early and mid-’80s. Punk Hostage Press recently published his memoir, Anarchy at the Circle K, of the time he spent on the road in service to punk rock bands. It’s a book of truths, many of them painful, some of them incredible—all written with a deadpan stare and dry wit. It’s a book where almost no one looks good. In this way, the book is a mirror, an authentic piece of art reflective of a time and a place, not a softened-edge elegy, dishonestly nostalgic, in the hopes of elevating a myth.

One of the pillars of DIY punk, for me, is the removal of the separation of band and audience and the snuffing out of punk idolatry and royalty, in the hopes of a more egalitarian form of music where anyone who wants to meaningfully participate can. As always, it’s important to listen to the voices of workers, the unsung. Anarchy’s narrator actively sneers at “punk celebrity” while being an essential worker with bands—lugging heavy equipment, driving countless interstate miles, re-fitting bent tuning pegs, dealing with crooked and inept bookers, negotiating with fragile artistic egos, and punching Nazis and jocks when they got on stage and attacked the bands.

This being punk, for many, it’s defined by a life lived hard. Many of its initial participants are dead. I think it’s important to recognize, in fundamental ways, the world Patrick writes about in Anarchy no longer exists. Not only were the ’80s a different time, they were a different world. It behooves us to read history from people who were “in the room,” who were actually participating as it was unfolding, who bled on stage, who were dragged out of hotel rooms by their armpits and slapped into consciousness after ODing, who deflected the wrath of cops away from a band member after a bottle mistakenly went through the cop car’s windshield.

It’s 2022. Patrick’s not a skeezy shitbag junkie. He’s no longer the guy who was an accomplice to calling in a bomb scare on the show he was supposed to work in order to get a night off. He’s sober, a certified drug treatment counselor, a gifted writer, and a lifelong punk.


Donna Ramone cleans off the nostalgia grease to see some punk for what it really is. It’s time to let some of it go. (instagram)

Jim Ruland posits that Elric was a punk and that comic books and role-playing games go together like rock’n’roll and drugs. (instagram)

Lorde Jayne didn’t have the nervous system to handle being a complex creature with multiple modalities. Now they do. (instagram)

Sean Carswell claims Johnny Rotten is dead and maths out why Subhumans (U.K.) > Sex Pistols. People also wanted to fight him over a shirt he bought at the mall. (instagram)

Rev. Nørb holds up a sign (with the message he intended for the audience facing only the drummer and the photographer) exclaiming “Fuck the Supreme Court.” He rectifies the situation in his column. (instagram)

Designated Dale went to funerals as a little kid and urges you to give a shit in the present tense.

Rhythm Chicken learns to love Dirtnap Fest and then drums for a wedding during it. (instagram)

Ricky Vigil provides a practical guide on how to make going to shows in your thirties (and beyond) more fun. (instagram)

This issue is dedicated to the memory of Vin Scully