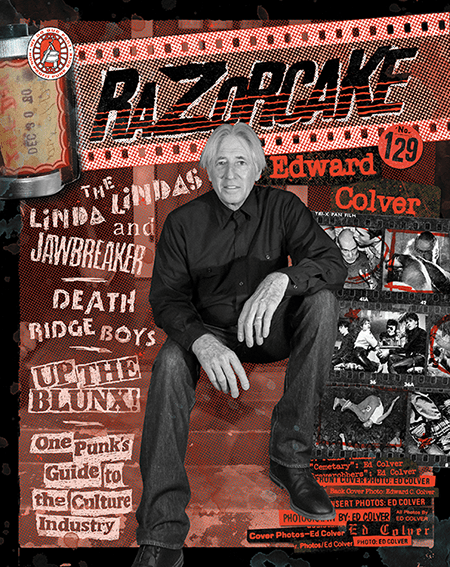 Razorcake 129, featuring Edward Colver, Death Ridge Boys, The Linda Lindas and Jawbreaker interview one another, Up the Blunx!, and One Punk’s Guide to the Culture Industry

Edward Colver is arguably one of the most important punk photographers. He benefitted from some temporal good fortune in that he started photographing in a large urban area as hardcore was becoming the most popular punk subgenre. But merely being somewhere isn’t enough to develop an iconic reputation. The photos had to be stellar to maintain interest, and Edward’s photographs were magnificent. His show photos captured the chaotic energy in small clubs and large venues, his documentary photographs have appeared on the covers of some of the most important and foundational punk albums, and his portraits recorded the lives of bands as well as scene participants. Edward’s art background helped shape his photographic eye, providing a unique way of seeing the punk rock scene, and his tenacity meant that bands known by almost every punk fan around the globe and bands that are only known to a few punks were photographed. Those photographs can now be viewed by a growing group of punks interested in the history of punk rock and by a general audience engaged by a range of exciting documentary photographs.

American oi, in powerful, rough hands, is a thing of beauty. Even rarer is smart, politically progressive antifascist oi, the stuff that’s barked like chainsaws revving and sounds like trees being felled inside a club while clear-cutting bullshit. For the past three decades, I’ve ignored the dodgy “patriot” boots, braces, booze, and “birds” crud and have honed into bands like GC5, Brassknuckle Boys, and Beltones. Stomping, intelligent bands that slip in melodies as varied as Big Boys to Kris Kristofferson to Wire. They sing about the hope of a better world while staring down injustices, just mad dogging the fuck out of them. Like they want to beat up bad ideas and the ding dongs who espouse them.

Death Ridge Boys are a working class band. Toughness and fairness streak through the core of the band, obvious as calluses. Will’s a self-employed farmer. Erik owns and operates a tile installation business. Jonathan teaches history and English as a Second Language to kids from across the globe. Dom’s a full-time musician, also currently in the Cro-Mags.

Here’s where I know great punk excels: when its music puts power behind words and ideas. It’s one thing to know the Death Ridge Boys are righteous. In life and lyrics, they’re pro civil rights, women’s rights, indigenous rights, and veteran’s rights. But it’s taken to another level when the gang chants of “Tamir Rice, Tamir Rice, Tamir was innocent!” ring in. I get goosebumps. It’s something to believe in. To fight for.

I don’t know about you, but I really hate fascists and Nazis. So do the Death Ridge Boys. That’s non-negotiable. So, which side you on? Are you going to be on the right side of history?

The Linda Lindas and Jawbreaker interview one another, introduction by Martin Wong

There we were, sitting in a dark, empty Wiltern Theater after midnight. My sister Angelyn, Adam Pfahler, and I were waiting for the merch crew to finish counting out totals at the end of a three-night stand. Angelyn’s daughters Lucia and Mila are in The Linda Lindas and so is my daughter Eloise, along with their longtime friend Bela. Adam drums for Jawbreaker, finally reunited with singer and guitarist Blake Schwarzenbach and bassist Chris Bauermeister after famously imploding. He remarked that both bands were underdogs who had no business selling out the historic Art Deco venue: One, a DIY punk trio celebrating its once-hated-but-now-beloved major label debut more than twenty-five years after its release; the other, kids between the ages of eleven and seventeen who happily played humble punk shows for years before their “Racist, Sexist Boy” video for the Los Angeles Public Library somehow went viral.

Recalling seeing Jawbreaker come up in dives like the Anti-Club, Raji’s, Al’s Bar, and Jabberjaw in the early ‘90s, and The Linda Lindas playing DIY all-ages matinees in Chinatown just a few years before, it was shocking to see them together at such a resplendent venue now. And it was heartening to see the most jaded punks get won over by the young openers and entire families, many of them POCs, at Jawbreaker shows typically dominated by older white dudes.

For Jawbreaker and The Linda Lindas to cross paths on a stage like that was extra special to me. Did I mention that one of Adam’s other bands, J Church, used to crash at my house when they played L.A.? Or that he played the Chinese banquet with Whysall Lane when Wendy and I got married? Or played with California numerous times at the Save Music in Chinatown benefits that my wife and I organized, which is how he knew about The Linda Lindas since the beginning?

Looking forward to Jawbreaker and The Linda Lindas playing four more nights together in New York City’s Irving Plaza, I asked the bands if they would be interested in interviewing each other for Razorcake. I selfishly thought it would be a cool way to make the moment last just a little bit longer; and Adam, Bela, Lucia, Eloise, and Mila said okay!

Up the Blunx! interview by Daryl

I don’t really listen to podcasts, but there are a couple I like to throw on while working on stuff. One of them is Up the Blunx, which is hosted by Kevin Tit and Akil Godsey. Two Black punks who are interested in talking with other Black punks. And while the conversation between the two can be absurdly hilarious, it’s absolutely critical to those of us who aren’t Black but are interested in the future of punk being an inclusive and supportive place. As they talk about their lives, the similarities, the differences, the setbacks and moments of victory, you’re invited to listen in and not only learn, but witness two badass people become close friends. And for that, I’m thankful.

The term “culture industry” was coined by cultural critics Theodor Adorno and Max Horkheimer in Dialectic of Enlightenment, published in 1947. To Razorcake readers, it’s probably self-explanatory; “culture industry” refers to the way capitalism presides over the giant grey sausage factory that is mainstream commercial music, art, and culture. The post war rock’n’roll bands which punk kicked off from mostly sang about cars and girls, maybe the odd surfboard. Punk made some dents in rock’n’roll’s fealty to these patriarchal norms and consumer aspirations but the old pop standards left as deep an imprint in punk by way of the underlying structures and expectations they embedded. These go from the nuts and bolts of how you play a chord to the unquestioned parameters and exclusions which so easily drop into place when you organize a gig. Without a serious government grant or a very, very long lockdown, I’m not going to get too far into the philosophical weeds, but I’ve picked out some of Adorno’s arguments which are useful for lovers of non-commercial music. I’ve also used other people’s texts—particularly by George McKay, a disability theorist and first-generation punk—to show the relationship between normative ideas of the body and punk. I’m pretty sure that punk and DIY culture have the best shot at disrupting the culture industry’s supply lines of sameness and exclusion, and I’ve suggested how some of punk’s quirks could be used to open up more to music and people that aren’t composed—not “put together”—in the way expected by the mainstream.

Donna Ramone got weirdly sweaty while sick from COVID. (instagram)

Jim Ruland honors the memory of his father-in-law andmakes some good memories. (instagram)

Lorde Jayne focuses on what they want to feel. It’s the opposite of dissociation. (instagram)

Sean Carswell pushes his artform beyond the narrow confines of branding… and celebrates The Mag Seven. (instagram)

Rev. Nørb (regrettably) receives a motorcycle helmet with an even larger pair of antlers bolted to the sides. Heavy sigh. (instagram)

From:
She teaches us

Designated Dale celebrates artistic differences and retells a story from his Evil Grandma why cats sniff one another’s butts.

Art Fuentes shows what may happen when guns have more rights than elementary school kids. (instagram)

Jennifer Whiteford breaks down a convincing argument for Universal Basic Income while staring at a load of unwashed laundry.