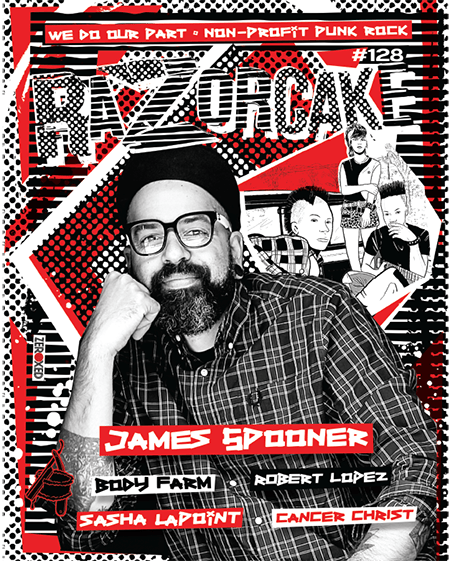 “I’m constantly looking at shows and I’m like, “Damn, remember when this was some white people shit?!” It’s so Brown, it’s so Black. It’s amazing.” –James Spooner

James Spooner is the director of Afro-Punk, a 2003 documentary that features over eighty interviews with Black punks from across the United States. It’s a remarkable film, not only for collecting marginalized stories, centering and elevating them, but it can be viewed as James’s own biography and self-discovery up until that point in his life. As James mentions in this interview, it’s a happy accident that you don’t have to be Black or a punk for Afro-Punk to resonate. You just have to be a deep “other”—a weirdo, a lunchroom exile, a poor dork, a non-dipshit punk, or a person of color—like the eight Christian Chinese students in a college in the Midwest who screened the film on their campus and were deeply moved by it.

Afro-Punk came from DIY punk and was critical of the continued, often unchallenged white male dominance in its scenes. It sparked a crucial conversation in punks who saw this as a huge fucking problem. If punk was in partial reaction to dominant culture, why did many of punk’s scenes mirror the worst of its colonial, patriarchal practices? Afro-Punk brought a hammer down on that mirror. The film also fostered genuine communities. In pre-social media, dawn-of-the-internet times, its message boards teemed with people finding solace with one another. Relationships blossomed beyond glowing screens to face-to-face meet-ups. Not only were they not alone, together they were a force.

In the wake of the success of the documentary and hundreds of screenings, Spooner co-founded the Afropunk Festival. It began as a natural extension to the documentary, a showcase for the power of Black punk in the United States. The festival evolved and grew over the years. In reasons detailed in this interview—from the red flags of shilling branded sodas to kids, to punk taking a back seat, to irreconcilable differences—James is no longer involved with the festival.

The High Desert, James’s graphic novel memoir about growing up in Apple Valley, Calif. will be released right around when this issue comes out. It’s a fantastic book that captures a time and a place full of stark, sometimes embarrassing honesty, and yet is devoid of toxic nostalgia. It doesn’t have all the answers, but it poses so many right questions. Poignantly, its narrator asks for forgiveness for not having the emotional lexicon to support his friends in their times of need. The High Desert follows the birth of James becoming a punk in a shitty, nowhere town in the early ’90s. I can say shitty because I grew up in a similar town two hundred miles away from James, at almost the same time. He nails the isolation and the boredom. The fuckin’ Nazis and casual racism. The finite friend pool. The lifeline that punk provided, often incomplete, often confusing, often out of sequence. The yearning to escape in the hope that a better world, a world that reflected his values, was out there somewhere—not yet knowing then he’d be an active builder in that better world with the art he was about to create.

The mixed-up, diverse early wave of punk that shook the foundations of American music often gets ignored because the agitators were not white or the product of elite cities. Luckily, Robert Lopez has pushed back against that marginal status by fully embracing the transformational power of music, art, history, performance, ethnicity, and folkways. All those elements fuel his own unique resistance through song, storytelling, and performance, whether he is delving into immigration policies, musical lore and memory, or empowerment. In doing so, he is one of the most enduring, intriguing, and constantly re-inventing figures in punk history. In The Zeros, he helped formulate classic jukebox punk singles like “Wild Weekend” that lasted under two minutes—short, sharp, and tuneful. Then, for a short while, he quickly shifted gears to the synth-laden art damage of Catholic Discipline. By the late 1980s, though, he developed a flamboyant and nuanced new identity, El Vez, that mixed visionary tactics, fiery politics, Mexican-American/Chicano pride, subversive pop culture appropriation, queer sensibilities, and a campy humor of Las Vegas-style proportions. He is able to effortlessly fuse being a rebel-rousing performance artist with being a party-bound swooning singer. His gusto, intelligence, and charm remain magnetic and unmatched, whether in his bands Bobby And The Pins, Trailer Park Casanovas, and The Little Richards, or as Mister Bob.

When you decide to dedicate your life to art and hang on as long as you can, you meet rad people along the way. Sasha and I met through punk rock. She’s been playing in bands, writing poetry, and traveling. Recently, her first book, Red Paint, published. We talk music, books, what it means to be a Native American, and about the history of her tribe and family. Art isn’t a competitive sport—it’s art, it should inspire you. The people you surround yourself with should push you to create. Sasha is one of those people to me. I hope you read this, get inspired, and reflect on the people who encourage your own passions.

The proliferation of social media and streaming options means that it’s easier than ever to find new bands. Geographic distances between a band’s location and where audience members live no longer limits our ability to discover new music. But where a band is from still matters as much now as it did before the internet expanded the flow of global information. Body Farm is an Ohio band. That geographical location matters; it influences band members’ desires to participate in their local Columbus scene, to meet punks in other Ohio cities, and to share the exciting DIY energy that’s present in that state. At the same time, Ohio matters because the ebb and flow of restrictive political policies fuels Body Farm’s lyrics and music. I was excited to interview two members of the band (Erek and Ocean) and learn more about Body Farm. Their blend of hardcore and powerviolence is interesting, the politically charged lyrics are important, and their efforts to put out creative records and zines continues an important tradition of punks doing DIY.

To say that Anthony Mehlhaff is just the lead singer of the Los Angeles band Cancer Christ would be an understatement. He is the only recognizable “human” with his backing band of multitalented snake people. Their love of noise and hardcore can only be matched by their love of spreading the word of Jesus. The ways they spread this word are unconventional by mainstream Christian standards and involve the blood of Jesus splattering, back alley baptisms, and flamethrowers in sewers. In this interview with Anthony, he talks about his influences, unorthodox antics, and truly why he believes that God hates cops.

Donna Ramone presents us with One (Specific) Punk’s Guide to Buying a House (That’s a Condo). (instagram)

Lorde Jayne’s a sucker for a lost soul. (instagram)

From:
East Los Side

…the class clowns, the foo that’s down,
an East Los shade of brown,
my side of town, homie!
–Richard Carranza

Art Fuentes draws a tyrant with blood in his boots, and a lapdog. (instagram)

This issue is dedicated to the memory of Chris Bailey