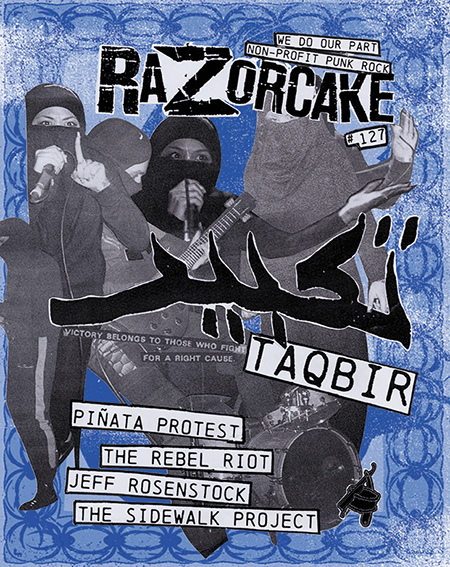 “Just because you mostly see white people singing and playing in bands doesn’t mean you can’t do it.” –Singer, Taqbir

In February of 2021, a Bandcamp page appeared for a group from Tangier, Morocco, called Taqbir. Their fuzzy string section and jerky drums was instantly reminiscent of the more chaotic side of U.K.82, while the reverb-infested vocals drew comparison to Yugoslavia’s Tozibabe. Between the sound, shocking cover art, and lyrics belted in Moroccan Arabic (called Darija), their demo, Victory Belongs to Those Who Fight for a Right Cause, gained immediate worldwide attention. Within a year, the four-song recording received a cassette release on Montreal’s A World Divided Tapes, and a 7” pressing on a La Vida Es Un Mus from the U.K….

Taqbir is in fact an international project, led by a Moroccan expatriate. Their blasphemous lyrics and artwork has garnered plenty of negative attention for the group and, for personal safety reasons, they have chosen to keep their names and location a secret. During their first two concerts in November, 2021, the band wore face coverings to protect their identities. In December of 2021, I video chatted with their vocalist, who has opted to be referred to only as “Singer.”

Back in January 2017 I took a trip to Los Angeles for my birthday. Razorcake HQ, to be specific. It was about a week before our government inaugurated 45, so naturally Todd (Taylor) secured a DJT piñata for the party. I remember watching one Angelino smash the piñata’s leg so hard it flew into the neighbor’s yard. My turn came. I was blindfolded, spun three times, swung, and missed. Swing, miss. Swing, miss. It was time to give up or change tactics. I dropped the bat and just started punching the air until my fists connected with painted newsprint and wheat paste, spilling Mexican candy, flight bottles, and exhilaration onto the desert ground. That was my piñata protest and it felt wonderful.

Based out of San Antonio, Texas, Piñata Protest is a refreshing mix of norteño, ranchera, banda, cumbia, Tejano, and punk music. They blend traditional Mexican genres with high intensity drumming, catchy chords, guitar solos, and accordion. They sing in English and Spanish, often switching back and forth within the same song. And they cover Mexican standards by the likes of Vicente Fernández (RIP) and Ramón Ayala. Álvaro Del Norte, who is the main songwriter in the band, was born in Mexico and raised in America. As a result, his music is a blend of both cultures as much as it is a critique of them. His music talks about being of two countries and being rejected by both, agricultural work, and lighter subjects such as love and tacos.

I interviewed them in Seattle while on tour with The Casualties. They’re serious and political, yet fun and whimsical as well. The band’s bicultural background gives them a unique perspective that allows their music to bridge the gap. The only wall they’re interested in building is a Salsa Verde versus Salsa Rojo Wall of Death in the pit. BYO tortilla chips.

There isn’t a more important band, punk or otherwise, in the world right now than The Rebel Riot. Yeah, I feel totally confident making that claim and have no problem backing it up. Right now, they’re utilizing the local, regional, and global connections they’ve made over more than a decade of being a DIY punk band to fight against the military dictatorship in Myanmar (formerly Burma). Even before the February 2021 military coup thrust them into the global spotlight, The Rebel Riot had become one of the most significant punk bands in the region. Their U.K. 82-inspired look and sound helped define Burmese punk, captured in not one but two documentary films: My Buddha Is Punk (2015) and No Spicy, No Fun (2021), which chronicles their 2017 tour of the U.K. Locally, they founded a chapter of Food Not Bombs, as well as Book Not Bombs and a free medical clinic. Their 2014 album Fuck Religious Rules/Wars was a powerful indictment of the many faces of fascism, not only in Myanmar but across the world. But while some of their themes are universal (gender equality, human rights, compassion for the poor) their source material is very local….

The Rebel Riot is the most important punk band in the world. It’s impossible for them to play a show right now, and it’s unsafe for them to leave the country or even go out at night. I’ve been a fan for years and I was extremely happy that lead vocalist Kyaw Kyaw was able to chat with me over Zoom.

Jeff Rosenstock: Interview by John Miskelly
Every Bomb The Music Industry! record was a fucking trip; like taking an ice cream van on a joyride through a New York night with a lunatic savant at the wheel, sprinkles and gumballs flying across your vision as the eight-bit thrash pop careened and swerved between tempos and tones at any given instant. Bomb broke up in 2014; the last album Vacation acting in retrospect as a nice bridge between the chaos of BTMI! and the four albums so far released under Jeff Rosenstock’s own name. While still maintaining the musical freneticism and lyrical dissonance of Bomb, those albums represent more the continued growth of Jeff’s ability as a songwriter; more a band than a project, more crafted, less flying by the seat of one’s pants.

Despite the Jeff Rosenstock band name and his role as chief songwriter, the band retains the sense of a collective based on friendship and mutual respect, a group of pals and co-conspirators who’ve worked with Jeff in one way or another for years. That’s the thing with Jeff—even as his status grows and his fortunes change—certain threads remain intact. Jeff still follows a set of egalitarian ethics he’s applied to everything he’s done since the beginning—keep it cheap, keep it accessible, keep in mind why you started this whole ska punk thing in the first place. The clearest outward manifestation of these principals is surely his digital-only label Quote Unquote. Going since 2006, it still puts out every album for free or for a voluntary donation. Every Jeff Rosenstock release is available for free, regardless of the label name on the cover. Even Jeff’s “other job” as composer for Cartoon Network show Craig of the Creek, compromises nothing; it still slays, it still rips, it’s still Jeff. This interview took place on the second morning of a six-week U.S. tour.

Soma and Stacey are two creative forces whose lives overlapped in a punk rock scene filled with sex, drugs, and rock’n’roll. They eventually began wanting more for their lives and wanted to do something that could make a difference. They wanted to do something to help people. Hence, when they were finally partied out, they decided it was time to throw a party on a sidewalk for the folks who live in Los Angeles’s Skid Row, one of the biggest communities of unhoused people in the United States. Because Soma is an artist and Stacey is a musician, their outreach began with art and music, the mediums they know. They showed up sharing their hobbies, connecting, and—perhaps most importantly—listening.

As the years went by and they got to know the community, they changed what they offered. Although they never could have imagined the complexities of what they were going up against, they’ve chosen to take it all on, head on. There’s no aspect of the community’s struggles that Soma and Stacey don’t approach with compassion and a tenacity to help the human beings they meet on the street. They aren’t looking at the community with a lens that imposes certain moral standards one should live by. They have a unique perspective and a historically unconventional approach. They relate to their participants not solely in an empathetic way, but because they have actual shared experiences. They don’t see themselves as better than or knowing the answer. They don’t judge people. They see the bigger picture. They continue to educate themselves, continue to connect and listen to their participants, and do whatever they can to support them.

Little did they know that when they decided to throw a party on the sidewalk, they would end up years later specializing in harm reduction, exchanging needles, and fighting against the kinds of laws Skid Row has endured for nearly one hundred years, all while inspiring and facilitating more Sidewalk Projects around the country. COVID didn’t slow them down. The government sweeps aren’t slowing them down. The stigmas, the epidemics, and the NIMBYs aren’t slowing them down. They’re doubling down. They’re fighting harder. They’re growing bigger, and their love for their community only gets stronger.

Donna Ramone contemplates the capitalization of the basic human right of housing. (instagram)

From:
Suicide on Telegraph

I won’t be surprised if Berkeley or
The Beats or
The Punks
The Vatos, save The World…
–Richard Montoya

Art Fuentes draws an ass and an elephant that killed an eagle. (instagram)

Rhythm Chicken hops aboard a choo-choo to the chagrin of a rail pig. (instagram)

This issue is dedicated to the memories of King Louie Bankston, Andrew Vachss, and Ronnie Spector.