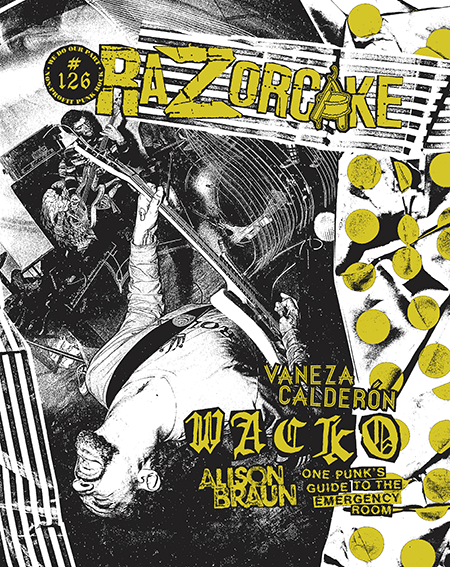 “Our shit is a good mixture of real greasy and wholesome” –Zaine, Wacko

There’re plenty of good bands in the world. If you close your eyes, tape a pencil to your chin, and poke around the internet long enough, you’ll inevitably find well-recorded and well-played punk music. There’s so fucking many of us who have been at it for so fucking long, people know how to do it! But for me to give a shit at this point, I need more than just a good band. I need a band with character, a band that’s invested in more than just their music, a band that’s hungry for transformation.

Wacko is one of those bands. They’re concerned with their community, they help set up local non-profit events, they dance for the other bands, they like to do new and interesting things, and on top of that, they rip some absolutely bizarre hardcore punk that feels unique and free. I appreciate their interpretation of powerviolence, which they use as an inspiration to push their sound to the extreme rather than preset parameters. Checkmarks on the whiteboard at the practice space.

For every moshstorm they summon—clowns and garbage flying through the air—I can also imagine them laying out on the bluffs of Long Beach solemnly singing the old cowboy classics: “I want to ride to the ridge where the west commences/ And gaze at the moon till I lose my senses/ And I can’t look at hobbles and I can’t stand fences/ Don’t fence me in.” It’s this chaotic harmony of influences that makes them so much more than just another good band. Expect everything and assume nothing.

PS: They are not involved in an anarchist sex cult. It was just too funny not to include. –Daryl

We might find incremental changes to a given genre of music during certain decades, with very little distinction between the beginning and end of that ten-year window. And during other decades, the shifts can be dramatic. Alison Braun’s photo book, In the Pit, presents photos she made between 1981 and 1991. This timeframe represents the emergence of hardcore and then the splintering of punk into multiple subgenres, with some of these subgenres garnering a lot of mainstream attention. Alison’s personal history is fascinating, mirroring the interesting changes in punk music and culture. She discovered punk as a kid and quickly figured out how to participate through documentary photography. Alison developed a rich live action portrait style, and her work helps document the joy of live music experiences while functioning as an important record of punk’s cultural transformations. The release of In the Pit provides a timely context to learn about Alison’s life and work in Los Angeles and Seattle. –Daniel Makagon

When planning two celebratory milestones in my life—Razorcake’s epic Quinceañera party and my marriage to Jennifer—only one musician bubbled to the top of the list both times: Vaneza Calderón. I first got to know her as a member of the mariachi trio La Victoria, but that’s just the tip of the iceberg of her musical talents and legacy.

Let me explain some of the decision-making criteria for that Quince. Since it was at Razorcake HQ, we tried to balance not royally pissing off the neighbors with wanting to satisfy the discerning audio palates of the attendees. I think we can all be in agreement that house shows are better when cops don’t break them up mid-set. La Victoria’s collaboration with La Tuya—the fusion of traditional mariachi instruments and delivery with punk’s powerful rawness and volume—made this blossoming young woman’s mascara smudge a little and her heart swell with pride. When punk’s arms are wide open and accepting, beautiful, unexpected things can result. The show was so fun.

In early 2020, Jennifer and I had talked to Vaneza (and the Rough Kids) to play our wedding party. We had to scuttle those plans due to COVID breaking out right before our wedding date.

I felt a little shy about approaching Vaneza for this interview. My knowledge of mariachi is scant. My Spanish pronunciation is atrocious and I’m self-conscious about it. But I wanted to conduct another Razorcake interview that drives home the fact that punk is often an approach to living as much as a sound or an appearance. Not all dyed-in-the-wool punk lifers over thirty have charged hair and wear spiky leather jackets full time. It’s important to see punk can be transmuted and share time with corridos, norteños, and mariachi—and all of the musical forms benefit from the overlap. It’s important to really see punks like Vaneza who are socially involved—conducting art therapy with prisoners, teaching kids music, and playing life’s most important moments as a working musician. –Todd

One Punk’s Guide to the ER by Tim JancharIt sucks to have to go to the emergency room. Last year while walking my dog, I was hit by a car in a crosswalk. It was early morning, and the driver was ironically an ICU nurse getting off her night shift.  It was only supposed to be a quick walk and my outfit, this being early winter in Oregon, was a pair of boots, a hoodie, sweatpants and yup, no underwear. During transport to the hospital, I had the hazy realization that I was going to be a trauma patient at the very same emergency room where I work. My co-workers deftly cut my clothes off as they examined me from head to foot before rushing me to the CT scanner. I was lucky that I only had a wicked scar across my head and a nasty concussion, despite getting thrown twenty feet. The concussion was so bad it took several weeks for my brain to get back to normal. During that rehabilitation time I did a lot of reflecting on the vulnerability and helplessness I felt as a patient and how tenuous our health and bodies really are. What we have, physically or mentally, shouldn’t be taken for granted. Nothing is assured and everything is at risk every day.

I have worked in emergency rooms for the last twenty years and have identified as a punk for even longer. There’s a lot of overlap between the two microcosms. I have no doubt the things that drew me in and anchored me in a creative, DIY punk community are the same reasons I work in the ER. The term “punk” is perpetually polysemantic, but in my personal definition, it is being creative, improvising, and making do with what you have in front of you. It’s reactionary, non-conforming, and doing what is necessary, needed, and right at the time. It’s being open and inclusive to people of all ethnicities, sexual orientations, and socioeconomic backgrounds. All these skills play out in the emergency room and are necessary in navigating through a shift. –Tim Janchar

Donna Ramone and the cleverest naming loophole of all time. (instagram)

Jim Ruland gets the cokeheads to do an Irish jig. (instagram)

Sean Carswell goes on a bike ride and swerves to the right. (instagram)

Rev. Nørb gets engulfed by the communal tidal wave of dorkitude. (instagram)

From:
Her
We’ve come a long way, sister
We were tired of making a hot plate
Ironing while we sweat
But we dared to have our brains vibrate
While we to men, became a threat
Our wombs so wild and full of bait
Yet we never let our hearts forget
Independent women, let it migrate
While you starving men stay in our debt.
–Kristine Nevrose

Rhythm Chicken makes sense out of a steaming pile of illogic. (instagram)

Jennifer Whiteford loses the center and watches the little ones teeter out of orbit.

This issue is dedicated to the memories of Mensi and bell hooks.