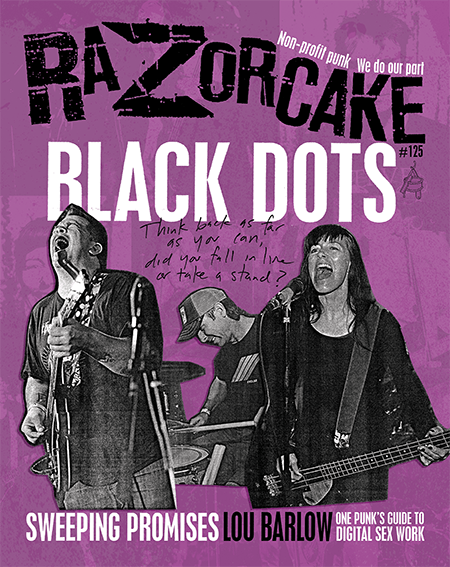 Black Dots play finely crafted punk rock music that’s big on melody, allergic to formula, and unfailingly concerned with evoking an emotional reaction in the listener. There are no gimmicks, no tricks. You’ll probably sing along when you see them live, but they didn’t deliberately write a sing along. You’ll probably dance, too, but they’re not inserting dance parts to manipulate you.

At the heart of it all is… heart. An earnest desire for people to be decent. To treat each other well. To try to be understanding and kind. And to loudly call people out when they’re not living up to those expectations.

Black Dots sing a lot about compassion, and we talk about it in this interview. I read somewhere that compassion is empathy + action. If that formula can be applied to the band, then empathy is their lyrics and action is their music.

Black Dots (the name is a Bad Brains reference) is April (Froschheuser) Soll (bass and vocals), Mike Lindau (drums) and John Brandow (vocals and guitar). They had been a four-piece until the departure of founding member Wade Henderson (vocals and guitar) in early 2021.

John and April have both been playing in punk rock bands for decades, April in bands like Vena Cava and Social Joke; John in bands like The Achievement and Funbox.

I’ve been following Black Dots since the beginning, because I used to play in one of those bands with John. He was kind enough to invite me to play bass (an instrument I didn’t know how to play) and join The Achievement (which I was a huge fan of).

During our last show years ago in our California town, John said something that stuck with me and illuminated the approach to music that has carried on into Black Dots:

John: How many people here have just started a band?
The crowd: [a few hands go up]
John: Okay, here’s the key to a band: You don’t have to know how to play anything. All you have to do is have a great big heart.
The crowd: Awwwwww....
John: Seriously. Sounds cheesy, but if you give your band every single thing you have, it’s gonna be awesome. Really.

Using music as a tool for connection and communication is a theme that persists.

One Black Dots song goes like this: “Don’t wanna stand up on no soap box, but a song is the only thing I got.”

Don’t let them fool you. There’s no way they’re getting down from that soapbox. And a song is all they need. –Scott MacDonald

Sweeping Promises’ directness is what caught my attention. There’s no hiding on their debut LP Hunger for a Way Out. It’s a balance of Lira Mondal’s clarion voice and Caufield Schnug’s strings, played in a way I could visualize tight strands of wire vibrating. Humans making beautiful music. There’s a sparseness to their songs that’s reminiscent of clearly designed and deliberate music, which is as easy to notice as soaring architecture above dim and congested streets. Sweeping Promises’ sonic craft is sometimes sweaty and shaved, sometimes stark and gleaming, sometimes austere and cold-sounding but butt-wiggling. Yet, it’s always confident.

Confidence is attractive. Confidence bends the past into a new shape, bends it into the future. Sweeping Promises not only twist the stripped pop exuberance of The Clean around Siouxie’s striking, haunting voice, but they conjure up intrepid contemporary bands like The Neutrals, Total Control, Spread Joy, and Smarts (while not sounding exactly like any of them). Their confidence is sizzling and exploding, like stovetop popcorn filling up a plumed bulb of tinfoil, heat escaping in a column through the top.

Whoa, yeah, I know I just dropped a lot of names there, but the point I’m trying to make is Sweeping Promises is a powerful band that reminds of the guiding spirit of music that expands and contracts, music that has a thrumming pulse.

I’m glad they blipped up on my radar and I got a chance to talk to them. –Todd Taylor

The first time I came across Dinosaur Jr. was in my teen years in the 1990s. I noticed the predominant group wearing Dinosaur Jr. shirts were the stoners and slackers at my school. Being a self-righteous, elitist punk fan, I never gave the band the time of day. There was very little that didn’t fit into the category of punk or hardcore I was interested in. I had no idea who was even in the band. More importantly, I didn’t know that two of them—J Mascis and Lou Barlow—had roots in the punk scene.

Before there were seminal albums by Dinosaur Jr., such as the phenomenal You’re Living All Over Me, releasedon SST in 1987, there was Deep Wound. A short-lived hardcore project, the band included Mascis on drums and Barlow on guitar. Their music was fast and brutal, and their output was limited to a 7” and a demo. Yet they attained cult status and are today cited as influential by bands such as grindcore act Napalm Death. I’m sure if I heard them in high school they would’ve been a favorite of mine.

Since my teens, I got past my narrow-mindedness and plunged headlong into Dinosaur Jr. fandom. Over the years, I’ve especially enjoyed Lou Barlow’s contributions to Dinosaur Jr. albums and his songs are some of my favorites of theirs. While most interviews with him take deep dives into Dinosaur Jr. or his other acts (Sebadoh, Folk Implosion), it’s rare to see him talk about his initial foray in the punk scene and what it was like for him. I phoned Lou and we talked about the Minutemen, why punk rock is his polka music, the best place to find ground turkey in Western Massachusetts, and his maturation as a solo musician. –Kurt Morris

One Punk’s Guide to Digital Sex Work by Lorde Jayne

[My name is Lorde. I’m an online sex worker. Lorde Jayne is my stage name. Lorde comes from feminist and civil rights activist, Audre Lorde. Jayne with a y is the name of my favorite teacher from Cal State Long Beach and a super important influence on my life. I was considering changing my name to Lorde Jay on account of the whole gender thing being in beta, but I recently learned that a beloved great-aunt used the sobriquet Jane to check into hotels and have all kinds of fun on the side of married life, so I’m keeping it for now to invoke her convertible-driving, chain-smoking, badass spirit. Because badass-ery knows no gender. Speaking of badasses, let’s talk about my favorite badasses in this world, (and the reason I wrote this One Punk’s Guide): sex workers. –Lorde Jayne

Bianca gets a purple (yarn) heart.

Sean Carswell knows that there’s not much better in this world than a punk Japanese Little Richard. (instagram)

Rev. Nørb nearly got taken down by the ‘Nuge. (instagram)

The goddess grabs me, turns me around,
embraces me tight offers a deep, long, wet, kiss,
then inhales and swallows me, consuming me,
in orgasmic ecstasy.


This issue is dedicated to Kate Flanagan and Dan Sapp.