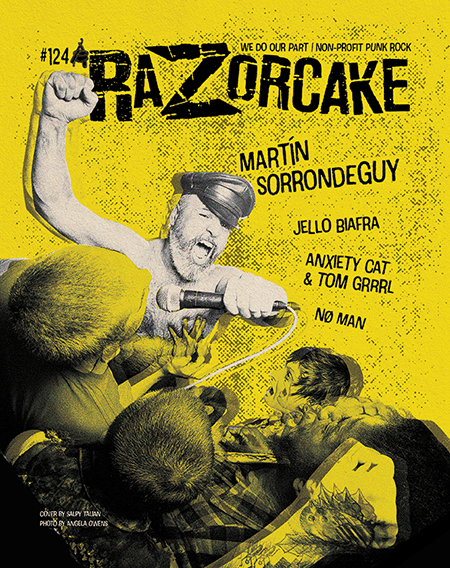 “We sold enough shirts, so I never had to dance on the street to get money for gas.” –Martín Sorrondeguy

I’ve known Martín Sorrondeguy for nearly thirty years. We met in 1993 and became friends instantly after I offered Crudos a place to stay when they came through the Bay Area on their first tour. Like long lost cousins, we stayed up late into the night talking about music, touring, our families, being Latinx in punk, and fabric softener. One time I even lent them my car, a four-door hatchback, to finish their tour when their van broke down. Our bands did a split record together, I’ve stayed at his apartment, met his parents, his siblings, eaten his cooking, made flour tortillas in his kitchen, and introduced him to my family. It’s always a special occasion when Martín comes to dinner. Martín, who has an amazing record collection of punk in all languages, founded and fronted Los Crudos, Limp Wrist, Needles, and countless other projects. He’s a Latinx punk trailblazer who, somehow, made it cool for White punk kids in the United States to sing in Spanish: “Asesinos / Matan a la gente y no tienen vergüenza / Preguntamos lo que pasa, pero se queden callados!”

But Martín is also a filmmaker (Mas Alla de Los Gritos), a photographer (Get Shot: A Visual Diary 1985-2012) a writer, and a visual artist who created record cover artwork for Lengua Armada, the Crudos record label that he ran, for Alice Bag’s debut solo album, and recently for the Spitboy discography, Body of Work. While preparing to conduct the interview, I remembered that Martín took the photograph on the cover of the Instant Girl LP, Post-Coital. The photo is an image of Karin Gembus, Dominique Davison, and me in a nude locked arm hug, a pose that was inspired by a sculpture we saw in his apartment, a sculpture made by his mother, Pati. While Martín has produced an extraordinary amount of groundbreaking music and culture-shifting art, his secret super power is bringing communities together—punk and queer communities, Latinx and Black communities, Latinx and punk communities—highlighting our shared struggles and humanity, and modeling how to make change in potent grassroots ways without politicians, laws, cops, or consumer capitalism.

I teared up several times while talking to Martín about his life, and we laughed really, really hard too. –Michelle Cruz Gonzales

The Dead Kennedys for me, like many Razorcake readers, served as one of my early entries into the world of punk rock. Their music was widely available in the late ’80s as was information on its singer Jello Biafra. With a little digging in the library, I was able to find the tales of Biafra. He ran for mayor of San Francisco, drawing enough votes away from the top vote-getters to force a runoff election. Then Tipper Gore’s Parents Music Resource Center took him to court for “obscene” artwork in the band’s Frankenchrist album—a case that ultimately ended in a hung jury and Biafra’s exoneration in the face of wilting media criticism—and a host of memorable television appearances, including calling Tipper Gore a liar on The Oprah Winfrey Show. (Check this clip out on YouTube.)

The weight of Biafra’s court case sank the Dead Kennedys, but Biafra wasn’t done. He hit the road, detailing the particulars of his court case in High Priest of Harmful Matter, the second of his nine (!) spoken word albums. He’s been a road dog since the Kennedys, doing both spoken word and performing with the various acts he’s collaborated with such as the Melvins, Lard (with Al Jourgensen from Ministry), and, most recently, Guantanamo School Of Medicine, whose new album Tea Party Revenge Porn is the five hundredth release on Biafra’s Alternative Tentacles record label. In addition to his own music, Alternative Tentacles has released a steady stream of excellent, often deeply strange mutations of punk rock by bands like Nomeansno, Tribe 8, Wesley Willis, The Ex, Fleshies, Report Suspicious Activity, and hundreds more.

Razorcake is dedicated to all things punk rock—but it’s also dedicated to the way punk rock moves forward. Nostalgia for its own sake too easily becomes hagiography, one of the very concepts punk sought to tear down in the first place. More than forty years down the road, Biafra is still moving forward, still creating, provoking, and calling out. As is mentioned in this broad-ranging interview, there’s no real roadmap for living a life in punk. Biafra’s just out there making the map bigger for the rest of us.

This interview is dedicated to the memory of Pete Ventantonio, best known as Jack Terricloth of World/Inferno Friendship Society, whose records were released by Alternative Tentacles. Jack died on May 12, 2021 as I was working on transcribing this interview. Rest in power. –Michael T. Fournier

Anxiety Cat and Tom Grrrl are through-and-through political punk bands. Their thoughts inform their actions, which inform their music and the methods in which they deliver it. Emotional delivery, physical delivery, done sustainably and substantially. While their projects are different, I kept finding certain qualities that made me feel like they were oddly similar. They both have this knack for crafting unique-sounding songs that make you feel less alone. They’re upfront and it feels reciprocal. Some songs sound pretty; some sound ugly. All sound purposeful.

I contacted them both separately because I was curious if they had heard each other’s work, only to find out that not only were they unfamiliar, they had never crossed paths and didn’t know each other. I pointed them both in the direction of each other’s most recent releases and they seemed to see what I saw, so I figured I might as well introduce the two of them and hit the record button just to make it official.

While they may not have all the answers or a crystal ball to see into this country’s lurid future, I know they’ll be present and thoughtful with every decision they make. And as hopeless and frightening as every breaking news headline seems to be, knowing that Rob and Daniel are out there gives me comfort.

If there’s any justice left in this world, while you read this, they’re sharing a campfire somewhere in the Upper Midwest wilderness. Misfits and Mountain Goats getting played on the acoustic for an audience of two little babies and a cat named Pip. –Daryl Gussin

I’ve been so lucky to be close with the Shami family—including the dynamic Maha Shami—since around 1989. Over the years, Maha and I have shared music with each other and had great times at shows together. Knowing that music played such an integral part in her life, I was psyched when she sang on one of Majority Rule’s songs, “Packaged Poison,” and even more thrilled when they and she formed a new band, NØ MAN. Now with three releases under their belt, NØ MAN plays heavy, brash, moody, fast punk colored with emotion and politics. Supported by three amazing musicians and screaming her way through the uproar, Maha brings the intensity on record and at shows.

In addition to being a good friend, Maha is an Arab woman, and I wanted to talk with her to get her unique perspectives about punk and Palestine. Read on! –Jennifer Federico

Donna Ramone is in search of lost time. (instagram)

Sean Carswell knows that the class divide rests on a mullet. (instagram)

Rev. Nørb explores the uselessness of sports and kitties. (instagram)

How to Live Again

“I can see her walking out of her place right now as I stare at the
old building. She looks left and right before she shuts the door
completely and leaves her car behind after that glance.

The door clicks heavily with a loud, echoing sound that reverberates
through the building it encloses.

Jennifer Whiteford wants to be sedated when the CDC takes their baby away.

Rhythm Chicken has somehow managed to keep predators out of his coop. (instagram)

Designated Dale celebrates the life and howls of Kim Shattuck.