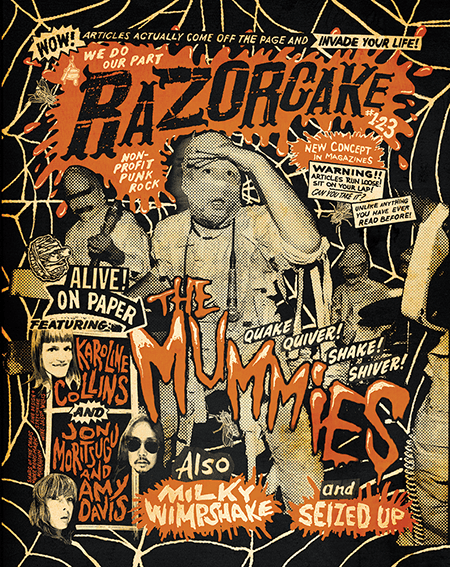 The Mummies: Interview by Todd Taylor

The Mummies concept is straight-forward. They play rabid, ’60s garage rock in homemade Mummy costumes with a heapin’ scoop of “fuck you” dolloped on top. In alternate timelines, they could have formed as The Swingin’ Swamis Of San Mateo or The Jolly Green Giants, but they embraced anonymity while bandage-wrapped in raggedy splendor. The Mummies present a rebellion against music professionalism and careerism through the full embrace of their “good enough” motto. They make no attempt to modernize or update anything. There’s something learnable in their practical, pigheaded DIY approach to being in a band and making music. They’re not interested in “progressing.” The wheel’s been invented and it rolls just fine. The Mummies are more concerned with striking poses on top of their Bonneville ambulance while being escorted along by a marching band, as if the world’s their personal parade.

Make no mistake; The Mummies aren’t boring-as-lint, clean-shirted revivalists providing undisruptive background music at the old folks home on meatloaf Thursdays. There’s punk in their pudding. Their live shows are raw and unhygienic, with front Mummy Trent alternating between actually playing his Farfisa organ and using it as a surfboard and a ragdoll dance partner. Throw in some kung-fu moves, and it’s no surprise that Billy Childish exclaimed the Mummies were nearly as good as the Damned in 1977 and John Peel recorded them at BBC studios.

Is it bravery to do something really, really stupid for so long? Or is it a curse? Or is it just a crime against better judgment? Probably all three. But to be this stupid for so long is one of The Mummies’ crowning achievements. Sure, that crown may be upside down and filled with turds and broken dreams, but these kings of Budget Rock created their own operational universe, down to the stale gum in their self-made trading card packs. The devil’s in the details for these pyramid miscreants.

We all know there’s no justice in this world. The bitter taste of dead expectations fills many of our mouths. Not all bands set out to change the world. I’m claiming the opposite here. There’s always room for some stupid fun and celebrating glorious ineptitude to push back some of the darkness. Let’s take a moment to enjoy the cool air cast by The Mummies’ towering shadows as they give the entire world the middle finger. –Todd Taylor

I have often wondered if punk can be an acquired taste or if the music is something we hear and we connect to right away. Karoline Collins seemed to know right away, but perhaps needed some more time to link what she felt as a young teenager to figuring out forms of participation… to become a punk. Once she was in, she was all in: hosting bands, helping grow a local DIY scene, connecting that scene to other regional scenes, and then traveling the world to meet other punks. Karoline’s experience both embodies and reflects the changes in the global punk community that have taken shape since the 1990s. She had pen pals and connected with other punks through in-person meetups. Later, Karoline was an early adopter of new media and social media that could be used to share punk art. I first learned about Karoline through her photography and was energized by our conversation that contextualized her excellent photographs in a history of punk community-building and participation. –Daniel Makagon

Jon Moritsugu isn’t just a cool underground filmmaker; he’s an artist. No matter what medium Jon uses—16mm, camcorder, or digital—viewers can instantly recognize his hyper-colorful palette, maxed-out soundtrack, deconstructed storytelling, weird humor, and leitmotifs of ego deflation, raw meat, and his one-of-a-kind lead actor and muse, Amy Davis, who has gone on to become his spouse and filmmaking partner. We became friends back in the ’90s as parts of an underground scene of Asian Americans making subversive magazines, movies, music, and subculture in general. More than two decades later his dedication to DIY filmmaking is stronger and unhealthier than ever.

For Razorcake, I asked Jon and Amy to look back at their work, their relationship, and their mental breakdowns, and look ahead to their eighth feature film, Numbskull Revolution, and his upcoming memoir, SKULLFUCK: The Brutalist Cinema of Jon Moritsugu. I invited our mutual friend, Emily Ryan, who contributed music to their soundtracks as part of the band Emily’s Sassy Lime and acted in Scumrock, to be our special guest. Sometimes it’s easy to feel like all your work in subculture is worthless, especially at a moment like this when Asians like us are being attacked and shot across America, but Jon’s unstoppable art making and the energy and story that he and Amy share give me hope, power, and joy. –Martin Wong

When a friend sent me an unsolicited Milky Wimpshake mix CD in 2004 I was already sold by the band name. Luckily, the humor, politics, catchiness, and sweet gooeyness of the lo-fi twee-punk songs kept that CD in the player for a very long time. Being from Newcastle, England, their records were tough to find over here. Much later, I found out there was an early Milky Wimpshake fansite where you could download all their songs for free with the blessing of the band.

Milky Wimpshake has been Pete Dale on guitar and vocals, Christine Rowe on bass, and countless drummers since 1993. They have put out eight full-lengths and seven EPs, yet they have never toured the States officially. I write “officially” because in 2017, Emily Timm, a young illustrator and Milky Wimpshake fan, convinced Pete Dale to finally come to the States. Emily and Nick Romy (Who Needs You, Whelmed, Marine Corpse) served as the ad hoc U.S. tour version of the band.

This interview is mostly with Pete Dale, but I wanted to add Emily and Nick to the conversation just because their tour is something that could only happen in punk, and that is something to be proud of. We talk about cults, aging, and Milky Wimpshake’s new 2020 record, Confessions of an English Marxist. –Rick V.

Seized Up: Interview by Rosie Gonce

Some of us were in a band when we were younger. Maybe some of us had to ditch dreams of endless punk rock tours to pursue a more stable lifestyle, making room for a new baby or a “real-life” job. But then there are the “lifers.” The lifers are the ones who will be doing this until they die, because it’s really the only way they know how to live. It’s not about following a certain career path or chasing an idyllic dream of being a celebrity. These are people who have a deeply engrained passion for music, and they’ve molded their entire lives to revolve around their bands.

Seized Up might be described in some social circles as a “supergroup” since all members of the band come from other bands, including well-known and still-active BL’AST, Good Riddance, and The Distillers. One might wonder why they even made this band. Well, it’s because they’re lifers. This is quite simply what they do, and they do it well. Seized Up is fast hardcore punk music with cryptic, shouted lyrics about gentrification, sobriety, homelessness, and other topics that piss them off.

It’s no secret these guys have “been around the block” a few times and “this isn’t their first rodeo,” or whatever other idioms there are about having lots of experience doing the same shit over and over again. But it doesn’t feel pathetic—like the retired rock star in a car insurance commercial—nor snarky—like the sixty-year-old sound guy constantly rolling his eyes. It feels genuine and down-to-earth. These guys are well-balanced, hard-working, enthusiastic people who organically came together to do something they love, at an advanced level. When you get a bunch of lifers together, and they all get along and have fun, but they also pour their hearts into their instruments, then really good shit happens. And although they’re seasoned players, the band itself is young and blossoming. Their ambitious energy is palpable. They’re all individually extremely driven within their personal lives and have similarly not been stopped by any challenges they’ve faced. So, it makes sense they naturally clicked, wrote ferociously, and kept moving forward even while half of the band experienced unrelated brushes with death. Although they haven’t been a band for long, they’ve proven there is nothing that will stop them, not even a life-threatening diagnosis or a nearly fatal car accident. It could be that they already know they’re in it for the long haul, but it’s still a testament to the kind of band they are. These four guys will obviously be playing music until they die; probably still drinking the same kind of beer and wearing the same faded band shirt they wore during this interview, too. But one thing is for sure; I know that whatever music they’re playing, it’s still going to rip. –Rosie Gonce

Donna Ramone and the ones that never knock. (instagram)

Michelle Cruz Gonzales recalls the fire that started it all. (instagram)

Rhythm Chicken puts seeds on his typewriter and pecks out the ruckus. (instagram)