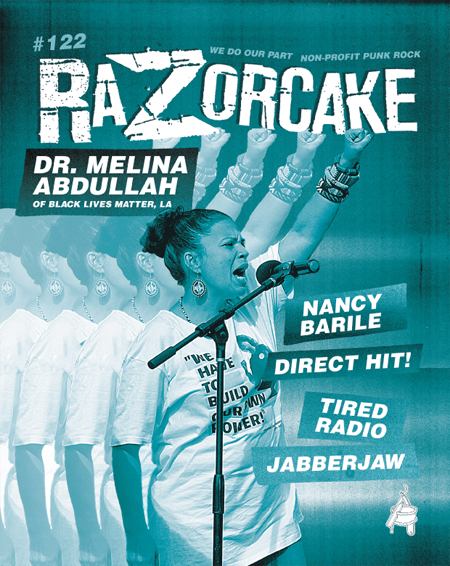 “There is no revolution that happens without a soundtrack.” –Dr. Melina Adbullah

I still remember the first time I heard Dr. Melina Abdullah speak. It was on a nondescript corner in South L.A. where someone had been murdered by LAPD. The address was impassioned and rousing, and I filed her name away in my brain. It wasn’t much later that I once again heard her speak, this time on KPFK, and it dawned on me how much of a badass this person is.

One of the founding members of Black Lives Matter L.A., Dr. Abdullah has been a leading force in grassroots organizing for racial justice, not just in Los Angeles, but around the world.

Being alive and able to witness Black Lives Matter catapult the ideas of Black liberation and racial equality into the global consciousness has been an absolute honor to watch, and I’m eternally grateful to Dr. Abdullah for taking the time to have a conversation about what BLM-LA is currently focusing on, her upbringing in Oakland, the transformative power of underground music, and much more! –Daryl Gussin

Nancy Barile is an old school punk, an award winning teacher, and a published author. She has made her presence known and lasting in each of those roles. Lucky for us, she’s also a master archivist and storyteller. Her book I’m Not Holding Your Coat covers her upbringing in an ultra strict Italian Catholic nuclear family, getting involved in the East Coast punk scene in the late ’70s, surviving riots, barely avoiding the Three Mile Island meltdown thanks to Roxy Music, befriending Patti Smith’s mother, and managing The Sadistic Exploits.

Her book ends in 1982 with a move to Boston where she married Al Barile of SS Decontrol, went back to college after fifteen years, and began teaching high school. There she has continued to change lives and be a strong advocate for students who need someone in their corners. By the time I was born in 1985, she had already been a part of so many huge watershed moments in hardcore and punk, booked shows that have lasting histories, and said yes to every experience life threw her way.

I see myself in Nancy in many ways, and knowing her story is inspirational. A lot of the things we have each done in our lives have overlapped—from bringing a DIY punk ethos into the classroom, to working behind the scenes booking shows. Where it differs is in the sheer magnitude of wild life experiences she has had and her ability to enchant people by telling stories about those experiences. I respect the hell out of her as a fellow educator, woman, punk, and fighter. –Kayla Greet

The world of Direct Hit! is a dynamic and colorful place. On the surface, you may just find a five piece playing blisteringly loud and chaotic music with a lullaby-like quality just underneath the screaming. Dig a little deeper and you’ll discover raw take downs of religion, thought-provoking premonitions of a pending apocalypse, adventures in mind-altering substances, introspective observations of society at large, and a dark, yet playful, sense of humor.

Over the years there’s been a rotating cast of characters in their lineup, as well as a core group that has stayed consistent for more than a decade. They’ve put out records on Kind Of Like and Red Scare, and are currently signed to Fat Wreck. The last three LPs they released have been full-on concept records about varying subjects. Brainless God’s box set came with a comic book and a DVD containing music videos of every song in the saga of that album. Direct Hit! is like finding a Lisa Frank Trapper Keeper full of acid and nightmares. Expect everything, be surprised by nothing. FUCK YOU, GET PUMPED! –Kayla Greet

It’s rare I get an album to review for Razorcake that I listen to so much I get to know it like the back of my hand. But Tired Radio’s debut, Patterns, is one of those gems. The eight songs on the album are catchy melodic punk that fall somewhere between Jawbreaker’s Dear You, Hot Water Music, and Small Brown Bike. Some songs are anthems (“Five Day Bender”), others are catchy earworms (“Send for a Hospital”), and the closer, “Gouge,” is an ethereal, emotional heartbreaker.

What attracted me just as much as the music—and what really made me want to do this interview—are the lyrics. Anthony Truzzolino’s words explore some lighter topics but underlying most of them are themes of suffering and struggle that delve into some darker places. I found lines in these tunes that I could relate to all too well; ones about anxiety, depression, and death.

Tired Radio was originally a solo project of Anthony Truzzolino, but since the release of Patterns in 2020, Tired Radio is now a full band. It consists of Kevin Daly on drums, Jason St. Angelo on bass, Chris Schmidt on lead guitar, and Anthony on vocals and guitar. Anthony and I talked on the phone about the Long Island music scene, mental health, therapy, and our mutual love for the punk band Leatherface.

Trigger warning: this interview delves into the topic of suicidal ideation, suicide, and depression. If you are feeling suicidal or need someone to talk to, please reach out to the National Suicide Prevention Lifeline: 1-800-273-8255. –Kurt Morris

I fondly look back at my high school reunion—not because of good times or old friends, but because my brother and I cut out early to catch a show at Jabberjaw! Entering the packed, sweaty dive still wearing our thrift shop sports coats, the first people we encountered were our pals in Emily’s Sassy Lime, followed by our sister and her roommates. And then as our visiting friends in The PeeChees squished their way up to the stage, the guitar player Carlos gave me a stubbly kiss on the cheek and pow! I knew the best time of my life was not as an awkward teen a decade earlier, but right then, right there at 3711 Pico.

A lot of people describe Jabberjaw as being in a “bad part of town,” but it was right down the street from our immigrant grandparents’ house where our dad grew up. I thought it was awesome to go to shows right there in Koreatown—a perfect pairing of the minority and DIY subcultures that made L.A. special to us. For years, I attended to up to three and sometimes even four shows a week in the comfy dive, surrounded by big-eyed Keane paintings, Campus Cuties figurines, and black light posters, and checking out local punk bands, garage rockers from Olympia, surf combos from Japan, noise musicians from hell, and more, with a young crowd from all over Southern California who paid five measly bucks to receive an “invitation” to the gig. In the converted storefront, I got to see underdogs like Slug, Jawbreaker, and That Dog play alongside upstarts like Beck and Hole and conquering heroes like Rocket From The Crypt, Bikini Kill, Nirvana, and Teenage Fanclub, and at least three bands fronted by Ian Svenonius: Nation Of Ulysses, Cupid Car Club, and The Make-Up.

No matter how packed it got, I was never turned away—probably because I usually arrived super early to stand right in front. Sometimes I was so early I could partake of the well-worn sofas in the TV Room—not to be confused with the tiki lounge/loft area that was eventually closed off due to drug use—or drop some quarters in the Galaga machine or Ms. Pac-Man tabletop, which were allegedly on loan from Krk from Flipside. And somehow I never had my car broken into or got held up, even though it seemed to happen to others every single night.

Being greeted by the always affable Gary Dent and his amazing sideburns at the end of the alley entrance made a dork like me feel like I was cool, and the fabulous Michelle Carr, who in fact moonlighted as a burlesque dancer, held down the counter with other friendly oddballs who were the opposite of jaded hipsters. And as vibrant as the indie music scene that incubated and then outgrew the club from 1989 to 1997 was, the sense of DIY community in the two hundred-capacity club was even stronger. Going to Jabberjaw connected my dots from being a college student who graduated from ticketed shows to underground ones, to getting my first office job and learning how to drink coffee to handle going out a lot, to making a zine and having bands sleep on my floor. Members of Dub Narcotic Sound System and The Make-Up stayed with me when they ended the club’s run with a legendary double header visited by the fire marshal.

So I was honored and happy to contribute to the coffee table book about Jabberjaw that came out in 2015, and thrilled to do it again when production started on a documentary a few years ago. The movie isn’t done yet, but I thought Razorcake readers would want to know what’s going on, and maybe even rack their brains for stories and scrounge around their drawers for photos, bootlegs, or even footage to contribute. This article is also a great excuse to release the trailer!

into how many more pieces
can we be broken into?

do we only become
once we are done?

forgive me, i know no tradition,
forever, i have just been trying
to remember something
before me, modernity.

Designated Dale goes to Michigan to get his ear hairs blown back.