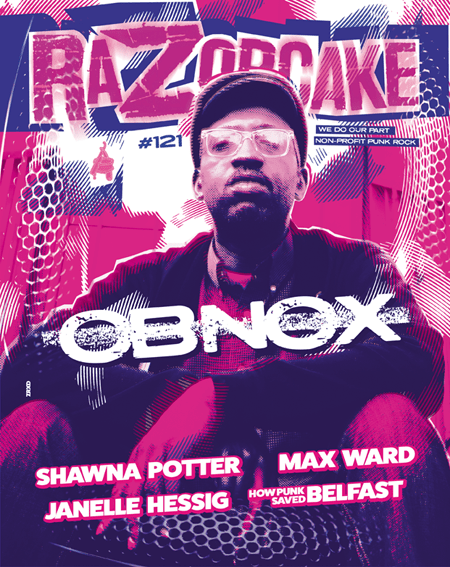 The great state of Ohio has produced many rockers since Alan Freed first spoke the phrase “rock’n’roll” on WJW 850 AM out of Cleveland in the early ’50s. And as unique and innovative as so many of these folks have been, there’s still fresh sounds permeating from the basements of The Heart Of It All. One of my favorites being Lamont “Bim” Thomas.

Bim’s kept his head up and his hands moving as the music flowed from his fingers through the garage stomp of The Bassholes in the ’90s, the visceral hardcore of This Moment In Black History in the 2000s, and the funked-out, lawless groovesphere that’s known as Obnox in these current times..

By coincidence we ended up talking via video call on Inauguration Day, a day that was filled with both relief and reflection. And while political parties come and go, those who pledge allegiance to the temple of rock’n’roll are in it for the long haul, dedicating our time to our communities and progressing the sounds we want to hear in this world. And Bim—like all the greats who’ve come before him—is out there with the best of them. –Daryl Gussin

Shawna Potter: Interview by Will Kenneth

Shawna Potter has a commanding presence on stage with feminist hardcore band War On Women. She jumps from growling, shouting, and yelling to then singing the band’s lyrics, which tackle issues that are probably very dear to every Razorcake reader: women’s rights, gender violence, racism, and the exhaustion of being a witness to the Trump administration’s cruel brand of nationalism and incompetence.

Just as important though, War On Women’s music fucking rules, too. They just put out a new album Wonderful Hell, and like every responsible band right now, they’re staying home so we can all be socially distant and stay safe. If we weren’t living in a pandemic, War On Women would have spent 2020 touring nationally alongside Bad Religion and Alkaline Trio, and Shawna Potter would be using her platform to advocate for making spaces safer both on and off stage.

Shawna’s advocacy doesn’t begin and end with War On Women, though. She is the Baltimore chapter founder of Hollaback!, a national organization dedicated to ending harassment, and the co-founder of the Safer Spaces Program. In 2018, Shawna published the Making Spaces Safer pocket guide before publishing an expanded edition as a full book in 2019 on AK Press. –Will Kenneth

For over thirty years Max Ward has been a central figure in the ever-evolving world of DIY hardcore, grindcore, powerviolence, and everything in between. Max’s involvement in the Bay Area scene during the ‘90s and impressive pedigree of former bands (Plutocracy, Spazz, What Happens Next?, Scholastic Deth) has made his name synonymous with one word: thrash! After all, he did start a label called 625 Thrashcore to honor and uphold the spirit of his earliest influences such as Heresy and Lärm by releasing records from bands that  share the passion for all things fast! Initially releasing records from his beloved Bay Area scene, Max quickly found himself receiving demo tapes and letters from bands from all corners of the world—and in some cases working with those bands to get proper releases out and serve them the justice he felt they deserved, thus solidifying his status as a global thrashcore kingpin.

Things slowed down a bit for the label while Max pursued a career in academia. He is currently a professor teaching Japanese and East Asian history with an emphasis on social theory, ideology, and political thought. Move the fuck over Milo and Graffin! Max was kind enough to set aside some time for me for a Zoom interview where we discussed his humble beginnings, how he’s managed to keep his passion for the thrash, and which bands you should watch out for in the near future! –Juan Espsinosa

Werewolves ride motorcycles, yeti have sex with mohawked back-to-landers, and mummy babies hide in sound booths in Janelle Hessig’s deeply funny and weird comics. Familiar tropes like beads of sweat and motion lines add emphasis to perfectly rendered facial expressions and rounded teeth in screaming mouths. A sense of joy is evident in meticulous background detail: little sight gags permeate her panels if you take the time to catch them. Once you see Janelle’s comics, you can’t unsee them—and you’ll look forward to the next ones.

But Janelle’s not just a comic writer and artist. She sang in the Tourettes when she was still a teenager, and later went on to bash the drums in Panty Raid and the Wet Spots. And, of course, she’s namechecked by both Bratmobile—who she roadied for—and Screeching Weasel.

She’s been a deejay, works in the comics industry, and—more than anything—gives off a vibe of goofy inclusion that welcomes people into the punk scene. Janelle Hessig is a punk original. I was so happy to have a chance to talk with her.

By the time you read this, Silver Sprocket’s reissue of The Cruising Diaries will be available. Janelle illustrated the sexual misadventures of Brontez Purnell (who Daryl and Johnnie Jungleguts interviewed in issue #116 of the ’Cake). This reissue is just one of the topics of this interview, which was a blast. While transcribing, I was struck by how much both of us laughed. (Despite the intervention of my neighbor’s leaf blower—dammit, Bob!)

This is the ninth installment of Paging All Punks, in which I talk to writers about punk rock. –Michael T. Fournier

In early 2019, I walked into the Ulster Museum in Belfast, Northern Ireland to visit the exhibition on The Troubles, the era of political violence that claimed more than 3,500 lives over three decades. It was a time of bombings, assassinations, random terrorism, and armed repression involving the British Army, the police, and competing Republican and Unionist paramilitary forces. The Troubles defined every aspect of life in Northern Ireland from the late 1960s until the 1998 Good Friday Agreement established a precarious peace.

Entering the multi-room exhibit, with its almost four decades of Troubles-related artifacts, I could not help but notice the mannequin displayed in the center of the first room, as if occupying the pride of place. It was dressed in a spiked, black leather jacket with “OUTCASTS” hand-painted on the back. The accompanying card read: “The Outcasts are a Belfast-based punk band formed in 1977. This outfit belongs to Greg Cowan, lead vocalist.”

One might well ask why a punk’s jacket is in the middle of an exhibit on The Troubles. But Northern Ireland’s punk scenes were both a product of and a response to the crippling violence that characterized everyday life for the population, especially the youth. Moreover, a discussion of the peace process that fails to take into account the punk scenes and their activism is woefully inadequate. –Kevin C. Dunn

Donna Ramone puts the “all” back in ACAB. (instagram)

From:Draft #3
I guess there comes a point where you don’t want to burden someone else with your pain. You feel bad for them. I don’t want to be an inconvenience to them, but does that matter more than having empathy for myself? I don’t know, I’m just asking. I really resent people who say that this is the “new normal.” There is nothing normal about this. I shouldn’t have to roll out of bed and turn on my camera and pretend to be “on” for the world and make believe that everything is okay. I’m sad, I’m angry, I’m tired, and I’m hungry. –Anatalia Vallez

Art Fuentes has a mouth full of sad. (instagram)

Rhythm Chicken runs for another term as Ruckus Ruler of the U.S. (instagram)

Designated Dale reads the poster with the windows down.

This issue is dedicated to the memories of Katz Seki, Brady Rifkin, and James “YAPO” Valenzuela.