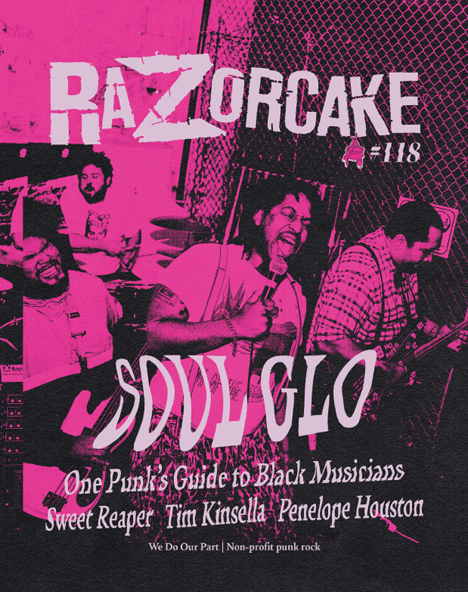 “I came of age as a black punk in the late 1990s and early ’00s, blasting chaotic hardcore records at home and wishing that my blackness and my love of DIY punk didn’t have to feel like two separate identities. When I first heard Soul Glo, a black band from Philly who pull from punk’s screamiest corners, I wished I could send their records back in time to tell my teenage self that I wasn’t alone.

Since the mid-2010s, Soul Glo have released three records, with Songs to Yeet at the Sun, their fourth and best so far, coming soon. Over the years, Soul Glo’s sound has developed from early ‘00s-style emo-core, expanding to include galloping d-beat, groovy post-hardcore, and abrasive hip-hop. The conversation in their lyrics has evolved as well, tying big picture racism to specific, lived experiences as a black person.

For this interview, I enlisted another old head black punk: James Spooner, the vegan tattoo artist and graphic novelist who started the Afro-Punk movement with his 2003 documentary. We did this interview via video chat with GG, Pierce, and Ruben on July 3, 2020.” –Chris Terry

One Punk’s Guide to Black Musicians by Sophia Zarders

This One Punk’s Guide is actually three punk’s guide to Black musicians (presented by the students of Our Lady of Cacophony—Del, Jude, and Dinah). A zine within a zine illustrated by Sophia Zarders. This curated illustrated guide introduces you to a variety of contemporary black musicians.

“Drinking beers and jamming with true friends forms the solid pillar on which the three-piece Sweet Reaper was formed. Between working nine to five in their California coastal town of Ventura, they create low-fi, melodic, twangy punk/beach tunes and enjoy the small town life.

When looking at their entire musical history—past/current bands include Massenger and Vnlvx—one can see they’re accomplished musicians and genuinely good people who value their local scene, whether it’s the music scene, the beaches, or community activism.

If there’s one thing that could be telling about the music of Sweet Reaper, it would be how they are particularly appealing to young children. I have always thought of children as having a sixth sense for judging character and goodness. And, I believe, that is exactly why children are drawn to the music of Sweet Reaper. That, and Sasha’s drumming, which both bounces along and drives the song so prominently but not overbearingly. They have an eclectic taste in music which makes their sound very accessible and liked by many, including bands who seek them out to support their shows and to add their mellow vibes and positive attitudes. They’re the perfect combination of humor and real talent.

I like to think of them as “beach punks,” not only because of what I know about their personalities, but also because if you like punk music, then this is the perfect soundtrack for you for when you’re just hanging out at the beach drinking a brew in the sunshine.” –Rosie Gonce

“The first time I came across Tim Kinsella’s work was in college in the late ’90s. I was in a mix tape exchange club and one of the guys put songs by two of Kinsella’s acts, Cap’n Jazz and Joan Of Arc, on my mix. I liked how Cap’n Jazz was so passionate and heartfelt, while Joan Of Arc was accessible but seemed weird compared to the indie rock and punk I was to listening to. I’ve followed Kinsella’s career ever since.

Kinsella is, in his own words, prolific. Starting as a teenager in the late ’80s, he has created music that doesn’t fit in any particular genre. Starting in high school with Cap’n Jazz, he’s helmed acts including Make Believe, Owls, Friend/Enemy, and also put out records under his own name. But Kinsella’s longest-running band is his ever-changing (both in lineup and sound) act, Joan Of Arc. Whether they’re writing accompanying music for a live viewing of the 1928 silent film Joan of Arc at the Art Institute of Chicago or releasing a video where Tim’s brother, Mike (Cap’n Jazz, Owen, American Football), portrays him,Joan Of Arc pushes boundaries. Kinsella’s current act with his wife, Jenny Pulse, is Good Fuck. This duo is another new direction for him, as it works with electronic beats and is among the more accessible work of Kinsella’s career.

In addition to his musical output, Kinsella is also the author of three books, all published on Featherproof. In the past he was also the publisher there. His life was the subject of a documentary titled Your War (I’m One of You), released in 2017. I spoke with Tim from his apartment in Chicago after he and his wife recovered from COVID-19, which they came down with when Good Fuck played in Italy in early 2020.” –Kurt Morris

“For as long as I’ve known about punk rock, I’ve known about Penelope Houston. After I got a Sex Pistols tape in junior high, I spent my lunch periods in the school library doing research on Johnny Rotten and company. Some of the earliest articles I read covered the Sex Pistols’ last show in 1978—Penelope and her band the Avengers opened. Since then, she has put together an extensive solo career, transitioned into painting, and toured the world with a reformed version of the Avengers.

Because of Covid-19, I was unable to travel to California for a wedding in April. I knew Penelope was on the list of guests for that fête, and had worried I’d be an awkward nerd fanboy if I had a chance to talk to her there. I jumped at the chance to interview her for Razorcake (and didn’t nerd out too badly—I think this might be the first ever interview with her that doesn’t ask her questions about the aforementioned show). She has recently retired from her library technician gig, bringing things full circle to me discovering the Avengers in a library.” –Michael T. Fournier


Donna Ramone takes one dog a day for loneliness. (instagram)

Bianca runs away from the generic anger.

Sean Carswell places the fate of the world in a hamburger bun. (instagram)

“Remember when you were young
in a hot kitchen full of women
and someone laughed
crow black hard like a planet
was on fire in her mouth
and suddenly all the women were
laughing with knowing eyes that held ruby sisterhood secrets
and babies sliding from bodies like stars caught in spun silk.”
–Shonda Buchanan

Ben Snakepit, on his 100th column,says his farewells. (instagram)

Rhythm Chicken and the unrequited love for the unrequested whatever. (instagram)

Designated Dale separates his laundry and questions the patriarchy.

And photos and illustrations from the lovely and talented:


This issue is dedicated to the memory of Breonna Taylor