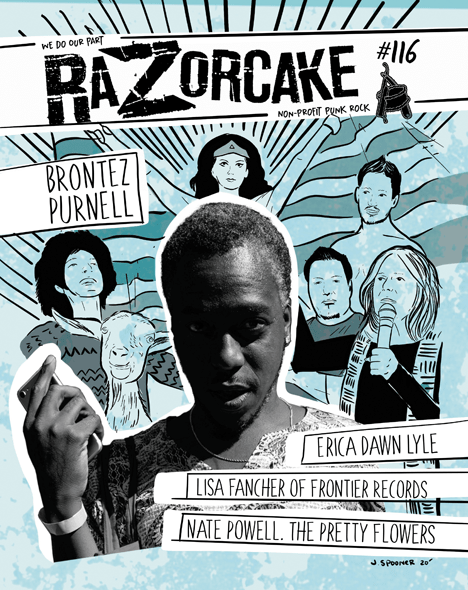 I didn’t know Oakland existed before Brontez Purnell. I remember being sixteen and asking where his electroclash band Gravy Train!!!! was from. “Oakland,” my friend responded. “It’s near San Francisco. But like, dirtier.” This description of Oakland is also a pretty accurate description of Brontez himself, at least his early work as a go-go boy/singer in Gravy Train!!!! and his book Johnny Would You Love Me If My Dick Were Bigger. But he’s also branched out into more romantic and gentle territory over the years with work like his ditty bop punk band The Younger Lovers.

Brontez has always been himself, even going back to his days as a baby gay growing up black and high pitched in the Deep South hamlet of Triana, Ala. (population 496). At the same time—in his semi-autobiographical debut novel Since I Laid My Burden Down and in his persona—Brontez doesn’t shy from admitting he wants acceptance and love from others in his community. It’s this vulnerability that makes him more believable to me than other queer artists who choose to present as indestructible. Brontez’s creative efforts are most commonly characterized by acceptance and fascination with these sorts of conflicts and contradictions in human interaction: individuality vs. acceptance, sexual freedom vs. emotional heartbreak, bottoming vs. pain.

Along with being a musician and a writer, Brontez is also a dancer and filmmaker. The work of the Brontez Purnell Dance Company, which he founded in 2009, recalls a more soulful, DIY Michael Clark in its conjunction of rock’n’roll and modern dance. Along those same lines he also directed the documentary Unstoppable Feat: The Dances of Ed Mock, which shed light on the work of the experimental gay black dancer, a fixture in the San Francisco dance community who passed away from AIDS in 1986. “I felt like I connected to an ancestor I didn’t know I had,” Brontez recently told Alabama Public Access. “It filled in a lot of pieces about my own life.”

Introducing me to Oakland is not the only first that Brontez represents in my life. One of the very first concerts I ever attended was seeing Gravy Train!!!! open for Le Tigre in Philly circa 2004. Seeing Brontez and company exposing themselves figuratively and actually on stage in a parade of dayglo sleaze changed my entire concept of what performance could be. It was a feeling of shock that I was exceptionally receptive to when I was sixteen. So I was thrilled when Daryl asked me if I wanted to Skype with Brontez on a Sunday morning for a meet-cute with this heroic California-based artist. I had too many questions to ask Brontez Purnell to fit in a single interview—did Gravy Train!!!! get any royalties when their song “Hella Nervous” was utilized in the adult film Neu Wave Hookers? That question didn’t make the cut. –Johnnie Jungleguts

I was excited to hear about Erica Dawn Lyle playing guitar for Bikini Kill’s reunion shows. Erica has been playing in punk bands for almost thirty years—Chickenhead, Onion Flavored Rings, and Black Rainbow, to name a few. As rad as these bands are, I still think of her as a writer first.

I’ve been a fan of Erica’s since the late ’90s, when I first started reading her long-running Scam, one of the two or three best zines ever. As you’ll read here, the focus of the zine has changed over time, but each issue still exudes the passion and deep commitment to DIY culture and values that hooked me early on. Erica is the author of On the Lower Frequencies, which collects some of her writing for both Scam and The Turd-Filled Donut, which she and her friend Ivy published when they moved from Miami to the Bay Area. She’s also the editor of Streetopia, which chronicled the effects of art as an alternative to neighborhood gentrification. And she’s done a bunch of freelance work, including for a piece where she hitchhikes to Texas to audition for Black Flag(!). I had never spoken to Erica before our phone interview. I was a little nervous because I’m such a big fan, but her warmth and storytelling put me at ease right away.

Welcome to the sixth installment of Paging All Punks, in which I talk with writers about punk rock. –Michael T. Fournier

L.A.’s Frontier Records would have been legendary even if it existed only a handful of key years in the ’80s. That’s because Frontier, during that time, fueled the rise of hardcore punk (Circle Jerks’ Group Sex in 1980, Adolescents’ “Blue” album in 1981), death rock (T.S.O.L.’s Dance with Me in 1981, Christian Death’s Only Theatre of Pain in 1982), the Paisley Underground (The Salvation Army in 1982 and The Three O’Clock’s Sixteen Tambourines LP in 1983), and crossover thrash (Suicidal Tendencies’ self-titled debut in 1983). The result: it jump-started underground music scenes around the world, provided dozens of highlights on your favorite mix tapes, and perhaps even inspired a tattoo of its logo (influenced by TV Westerns) on your neck.

But Lisa Fancher’s indie label never stopped. Frontier went on to document and share music beyond SoCal subcultures: The power pop of Flop from Seattle, Elliott Smith’s first band Heatmiser from Portland, slowcore pioneers American Music Club from San Francisco, and post-shoegaze Lilys from Washington, D.C., to name a few. And, oh yeah, even more kickass punk from the likes of The Weirdos and even The Damned.

Frontier’s fortieth anniversary seemed like a worthy occasion to check in with its founder, one of the unsung heroes of punk and my friend. Todd agreed. Sadly, we had to move our conversation from Razorcake HQ to our personal devices at home for social distancing purposes, but Lisa was putting out key records way before COVID-19 and she’ll be doing it long afterward. –Martin Wong

Nate Powell has done a number of impressive things. In the ’90s and early 2000s, he and ten other bandmates in Soophie Nun Squad packed show spaces—and later in the evening—your living room floor. Throughout that time he was also working on illustrating and writing comics. In 2009, while still playing in bands, his book Swallow Me Whole won the Eisner Award for Best Graphic Novel. His collaborative book series March (written by Congressman John Lewis and Andrew Ayden) won the National Book Award in March 2016, making it the first graphic novel to ever win this award.

These days, Nate doesn’t play in any bands or see a lot of shows. He focuses on making comics and spending time with his family. He’s been busy since March. He wrote and released Come Again, a fever dream-like horror story that takes place on an Ozarks commune. He illustrated the Van Jenson-written gritty crime drama Two Dead, set in 1940s Arkansas. He also wrote and illustrated the short essay About Face, which you should read as soon as you finish this issue.

But for this interview, I didn’t want Nate to talk about his books. I wanted Nate to talk about Nate Powell: the positive, hardworking, self-described aging  punk who has had run-ins with well-known politicians and card-carrying “jinglers.” –Rick V.

I got an email in 2016 from Noah Green, asking if I wanted a copy of his new band’s single to play on my KPunk podcast. I’d never met Noah and I hadn’t heard of The Pretty Flowers before, but the songs on the My Alchemist 7” immediately captivated me. The Pretty Flowers blended a DIY punk sensibility with ’90s-style indie pop, conjuring up images of Teenage Fanclub or the Lemonheads back when they were good. Noah kept sending me more of their releases, each one reflecting a maturity of an already-realized sound that made their music bigger and better. When they finished what would be their debut LP, Why Trains Crash, I suggested he contact Chris Mason of Dirt Cult Records, knowing Chris would dig both the musical beauty and DIY ethos behind The Pretty Flowers. Dirt Cult also released the band’s second full-length, Golden Beat Sessions, which was an eclectic covers collection featuring selections from Nick Lowe, Thin Lizzy, Split Enz and, not surprisingly, Teenage Fanclub.

The Pretty Flowers are an L.A. band, but I live on the East Coast, so my chances of seeing them live are pretty slim. In the midst of the COVID-19 pandemic, Razorcake had to stop interviewing bands face-to-face and switched to doing them online. I took advantage of that situation and got the guys in The Pretty Flowers on a group Zoom meeting in early March for a cyber-interview. –Kevin Dunn

Elly Dallas is an art mentor and knows a Donkey named Dottie. (instagram)

From:
My Country Dances Across My Face

“How beautiful is the sky when no one can claim it”

Rhythm Chicken ruffles some feathers as the Les Nessman of Door County. (instagram)


This issue is dedicated to the memory of Judy Alvarado