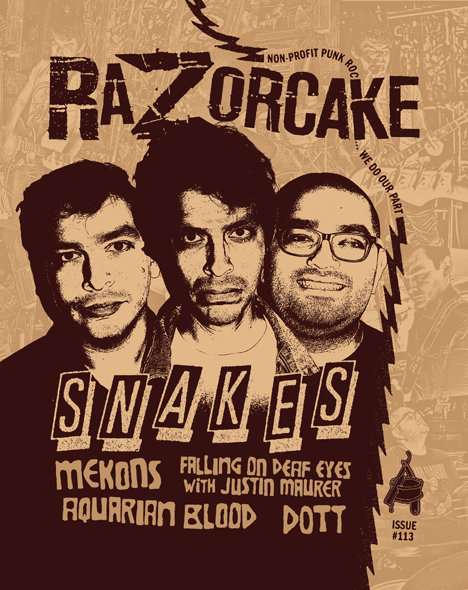 “If it’s our job to promote music we find important—and I believe it is—I proudly present to you: Snakes. Last issue I gushed over their five-song cassette, Psychic Rats, so it only seemed appropriate to sit down with them and discuss the motivation and inspiration for being who they are and doing what they do. For the last ten years brothers Mark and Jake have fueled some of the most hilarious, surprisingly insightful, and equally well-informed conversations one could ever hope to have while circled around a twelve pack of cheap beer. Not to mention that I was hopelessly in love from the first second I saw their old band Handski. Fans of The Brokedowns and The Ovens should definitely make a point of checking their Terminal Dreamland release. Now with Snakes, they’ve distilled Handski’s melodic tendencies down to a concentrated syrup and blended in a hardcore fury that would make Pig Champion blush.

Let the crushing weight of the world wash away as you explore the internal workings of Pico Rivera’s finest. The pain, the hilarity, the absurdity. A nihilistic vacuum where it might just be that nothing matters, but fuck, you best be honest about it.” –Daryl

Shortly after I watched the 2013 documentary Revenge of the Mekons, I discovered they were playing a few hours from my house, at a destination venue called Pappy and Harriet’s in Pioneertown, Calif. I needed to be there. I had just discovered this amazing band full of leftist art punks and jolly pirates fusing rock’n’roll, dub, and outlaw country, applying whatever-the-fuck you call that mixture to some amazing, collaborative songwriting.

The Mekons had been a band in one form or another since the late 1970s, originally practicing their songs using Gang Of Four’s gear while that band was breaking for a pint. They invented the alt-country genre with their 1985 album Fear and Whiskey.

They remained a band for all the right reasons and continued to make good (often great) music forty years into their collective existence. My plan was to drive to the venue just outside of Joshua Tree, see the Mekons play, and then camp out behind the venue, under the stars. A few hours before the show, as I was setting up my tent, the manager of the lot came out and warned me there were supposed to be seventy-mile-per-hour winds that night. Shit.

I texted Daryl and asked for friendly advice. He told me, in the morning, I could either have a really great story or a nice continental breakfast in a hotel bed. The next morning, as I was vibrating from the show the night before and enjoying Holiday Inn hard boiled eggs and mini-blueberry muffins, the Mekons were in the process of recording Deserted. It’s a fantastic album released this year on Bloodshot Records. It is on my short list for favorite albums of this year and I can’t believe I got the chance to sit down with guitarist-singer Tom Greenhalgh and multi-instrumentalist Lu Edmonds at Razorcake headquarters and have this chat. If I die young, ask them to play “How Many Stars?” and “Last Dance” at my funeral. –Jon Mule

“When Justin Maurer introduced himself to me at a Save Music in Chinatown benefit show last winter, I was already a big fan of his garage punk band Maniac and knew a little about Clorox Girls and Suspect Parts, too. But it was news to me that he and his Deaf filmmaker pal Delbert Whetter whom he also introduced, were making a documentary about the San Francisco Deaf Club. Like everyone else, they were excited about seeing The Dils play their first show in four decades, adding that they wanted to interview Chip Kinman for the movie, too. The Dils had played the social club for Deaf people with Catholic Discipline during the first wave of West Coast punk. Wow!

Not more than a few minutes later, my wife and sister were excited to tell me they just spotted the guy who was all over the news doing American Sign Language interpretation at the LAUSD teacher strike rallies. To us parents of elementary school students and supporters of public education, he was a big deal. And he turned out to be Justin!

We became friends. Over time, I’d notice Justin signing at appearances by big-time speakers like Michelle Obama, Elizabeth Warren, and Bernie Sanders, as well as local concerts by punk legends like Alice Bag and The Avengers. It was sort of a combination of the two worlds when he signed for my daughter’s band The Linda Lindas at a benefit gig my family helped organize to get educator and activist Jackie Goldberg elected to our school board. That’s when Justin told me he was going to make a play about his life as a punker and a Child of a Deaf Adult (CODA) and bringing the subcultures together.

Sure enough, just a few months later, my family attended the premiere engagement of Falling on Deaf Eyes at the Hollywood Fringe Festival. The totally DIY production told his life story with punk rock, signing, and incorporated a Deaf director, a Deaf producer, and a Deaf actress who played his mom. I loved how the piece showed underdog cultures overlapping and supporting each other in unexpected and wonderful ways, and I thought it was too good and too important to reach just the handful of people who caught performances in the shoebox-sized theater in East Hollywood. So I brought Justin to Razorcake HQ for a chat.” –Martin

“One thing people in Memphis are able to do at length is extol the virtues of a small bar of their choice. A small bar in Memphis can create a stage for anything from a haunting, to a celebrity sighting, to an unwanted open mic. You can find someone you’re looking for. You can find someone you’re not looking for. You can get something to eat. It might not be what you wanted, but it’ll be food.

The old and the new intermingle with surprisingly little controversy, particularly since this liberal city acts as the gateway to a conservative state. You’re likely to be at odds with someone in the room politically. But Memphis gathers little moss. It’s not unusual to see a grindcore flyer taped up next to a dusty portrait of Elvis. If you find yourself in a bar that appears too clean, there’s a good chance you’re in a place built to amuse the tourists. I’d be interested to survey the midtown and downtown crowd to see what percentage of them know what a Dave and Busters is. Memphis has one.

In a small bar anchoring the music scene in the trendy Cooper-Young neighborhood, what has been described to me as “three-fourths of the acoustic lineup” of the already stripped-down band Aquarian Blood is staging an area to perform. The band normally comes as a six-piece box: a large machine of angry punk noise framing piercingly snotty lead vocals. The band is great in this form, but over the last year they’ve developed a compelling alter ego: an acoustic lineup with dark, psychedelic leanings.

They’re setting up in the corner of a bar set upon partially by fans, but predominantly by a Friday night flock of amateur drinkers. Some people would be satisfied with a little strumming, a Johnny Cash cover, and a folksy wink—a type of purr that can be found easily in Memphis bars—but Aquarian Blood are no cover band. The group’s acoustic variant is a far cry from bands trading in electricity. The songs cover a devastating array of hardships delivered with a Baroque seriousness. Any humor delivered includes the weight of the world and is devoid of the ole Nashville wink. The guitar riffs include a lot of finger picking on a nylon stringed guitar and ethereal harmonizing between core members J.B. Horrell and Laurel Ferndon. Tonight, keyboardist Keith Cooper, a member of Aquarian Blood and all-around keys-for-hire, backs the band with a repertoire of psychedelic keyboard riffs and rhythmic noises, making the experience more like listening to a good record than a repertoire of songs. Donovan joining The Butthole Surfers is a good comparison.

Watching the seasoned band of musicians soldier through the unorthodox set while hyenas drink themselves into a stupor was inspiring. With the old and new of Memphis bleeding through the walls, an unusual band took a chance in front of a crowd of people too drunk to care. You might accuse me of being dramatic, but in my mind, this is one of those situations where IT happens. Whether or not you appreciate the music, this is punk without trying: a call to get with it or fuck off to Dave & Busters.

I got to talk to J.B. Horrell a few weeks before their new album A Love That Leads to War is set to be released.” –Billups Allen

“Founded by punk veteran Anna McCarthy (vocals and guitar) with a clear vision of producing sun-drenched pop songs steeped in a DIY punk ethos, Dott has been a major force in Ireland’s punk scene since 2012. Joined by Laura Finnegan (bass, backing vocals), they craft lush, harmony-driven songs that conjure up images of The Ronettes raised on a steady diet of the Ramones. For some, The Breeders might be a useful comparison, but Dott are somehow both more punk and more pop than the Deal sisters. Eventually joined by Anna’s husband Evan O’Connor (guitar) and Laura’s brother Donal Finnegan (drums), Dott has released two full-length albums and several EPs and splits. They’ve shared the stage with bands as varied as Torche, Shellac, and Sir Mix-a-Lot. But equally as important is their dedication to nurturing and strengthening the DIY music scenes in their home of Galway, Ireland and beyond. I sat down with Anna and Evan to discuss the vision behind Dott, their extensive musical activities, the challenges of keeping local scenes afloat, and writing love songs for a husband who doesn’t listen to the lyrics. Welcome to your new favorite band.” –Kevin


Donna Ramone ponders the forever paradox of being something other than white in America. (instagram)

Sean Carswell is listening to surf rock and complicating race in America. (instagram)

Rev. Nørb turns to Channel Three in Green Bay and gets wrapped up in the dead- comrades-in-arms mojo. (instagram, website)

Designated Dale is involved in the archeology of punk.

Jamaica Dyer is glad they haven’t banned straws yet. (website)

“unset over My City”

This is part two of a three-part in memory of series for Efren Almaraz and Nipsey Hussle in collaboration with the Watts Poets and Puro Pinche Poetry.


This issue is dedicated to the marriage of Bianca and Matt.