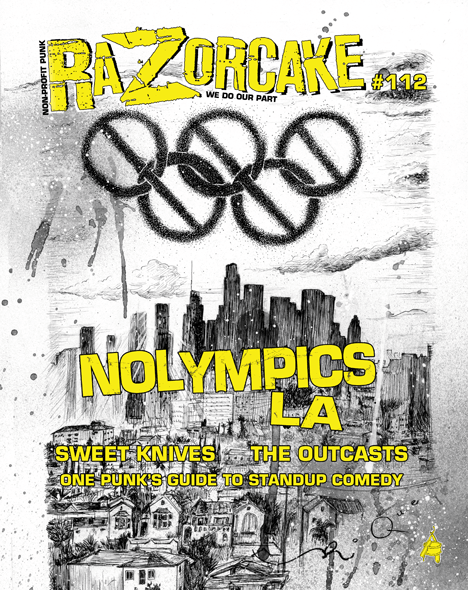 “In July of 2017 Los Angeles was “awarded” the 2028 Summer Olympics. It felt like a death sentence for working and middle class folks already struggling to keep their homes and neighborhoods intact in a city with such a visible housing crisis. Everyday more and more people are displaced, forced to relocate to neighboring inland counties or other states.

The campaign was spearheaded by Mayor Garcetti and the city council didn’t push back against his maneuvers to gain the international spotlight. Actual public input was ignored while a highly questionable opinion poll was presented showing what statisticians refer to as “dictator numbers” in support of the event. In the end, decisions were made either not fully realizing the implications, or not caring about the citizens they were elected to represent. City council voted unanimously to support the bid to be the host city. The message was clear: Those at the top get what they want.

This isn’t an attack on sports or athletes. This is about politicians making dirty decisions that bear dire consequences for a massive amount of people, all in the name of something completely avoidable and unnecessary.

In this interview Steve and I sat down with three organizers from NOlympics LA to discuss how we got to where we are now, the disaster looming on the horizon, and what we can do to prevent it.” –Daryl Gussin

“Alicja Trout is one of my favorite musicians. The first time I saw Lost Sounds ended up leaving an impression that’s lasted almost twenty years. Alicja pounded her synthesizer like a percussion instrument—think Screamers, not Human League—and wailed on her flying V guitar. The band, well, they didn’t look calm and didn’t look like they were having a good time, but they were radioactive. They played like they were under a ton of internal pressure and looked like an electronic graveyard zapped to life. Band members shot slitted stares and yelled clipped shouts across the stage at one another. The inter-band tension radiated out like lightning bolts. I’d like to imagine the attentive audience members got their DNA scrambled at that show and we all took a bit of their music into the sewers of the underground like mutated rats, brains visibly pulsating when we played Lost Sounds records for years and years afterwards, emanating little mutant blinks of light all around the world.

At the core of the glowing, throbbing nucleus of Lost Sounds were Alicja Trout, Jay Reatard, and Rich Crook. Alicja and Jay each wrote half the music and shared equal creative responsibility. They were the twin brain, the conjoined creative body with a common cause. Until they suddenly weren’t. The band ended swiftly, but Alicja didn’t miss a beat forming River City Tanlines. Gone was the synth damage and out came unadulterated guitar rock’n’roll. Her productivity as a singer, songwriter, and visual artist continues to be off the charts through today. You really can’t go wrong by soaking in any of the bands she’s been involved with since the dissolution of Lost Sounds: Black Sunday, Alicja-Pop!, Mouserocket, Destruction Unit, or Fresh Flesh.

Sweet Knives began as a Lost Sounds reboot, playing Alicja’s songs. When Alicja, Rich, and John Garland got back together, they quickly realized that they didn’t want to be restricted to solely being a cover band of their old band. They still play with the arcing, tense, dirty-crackle lightning of Lost Sounds, but are also writing new songs that reflect where they are now. They’re songs that come from lives that include responsible motherhood, sustainable rural farming with Mennonite neighbors, a keyboardist who’s also in the yacht rock band Relentless Breeze, and creative resilience that bobs like a long-lasting flare on a dark and stormy sea.”  –Todd Taylor

The Outcasts: Interview by Kevin Dunn

“The Outcasts were one of the first punk bands in Belfast, Northern Ireland. They formed in early 1977, just as the first wave of punk was sweeping across the U.K. The three Cowan brothers—Martin (guitar), Colin (drums) and Greg (bass and vocals)—decided they wanted to start a band before they could even play their instruments. Before they even had instruments. Alongside Stiff Little Fingers and Rudi in Belfast and the Undertones in Derry, The Outcasts helped create one of the most vital and transformative punk scenes in the world.

This was at the height of The Troubles, the era of political violence concerned with the status of Northern Ireland that would eventually claim over 3,500 lives. Unionists (most of which were Protestants) wanted Northern Ireland to remain part of the United Kingdom, while Republicans (most of which were Catholics) wanted the six counties of Ulster that composed Northern Ireland to become unified with the Republic of Ireland. By 1977, Belfast was an active war zone: the British Army was occupying the streets, the city center was a no-go zone after dark, everyone stuck to their segregated neighborhoods, and paramilitaries waged a violent campaign of bombings, assassinations and random violence.

While being a punk might get you strange looks in London and NYC, it could get you killed in Northern Ireland. But punk would alter the political and social reality of Belfast. Literally taking their lives in their hands, they would traverse security barricades and sniper kill-zones to get to venues such as the Harp and the Pound to see bands like The Outcasts, SLF and Rudi play. Punk shows became non-sectarian spaces where Catholic and Protestant youth came together for the first time. They stopped being Catholics and Protestants and became fellow punks. They imagined, and put into practice, an Alternative Ulster.

While many of their fellow bands chased stardom in the U.K. and beyond, The Outcasts stayed in Belfast and built a following across Northern Ireland, becoming the country’s biggest punk band. After brother Colin’s untimely death in 1982, the band continued on until calling it quits in 1985. During their eight-year run, they helped strengthen a punk scene and youth culture that established the foundation for the peace process that eventually resulted in the 1998 Good Friday Agreement.

The story of Northern Ireland’s transformative punk scene was documented at the time in John T. Davis’ classic film Shellshock Rock, and it has gotten increased attention in recent years, most notably with the release of the 2013 feature film Good Vibrations (along with a related stage show). A historic marker has been placed outside the Harp Bar, and Greg Cowan’s studded leather OUTCASTS jacket is prominently displayed as part of a current exhibit on The Troubles in the Ulster Museum. As Belfast punks were finally getting their due, a reluctant Greg Cowan came out of retirement and, with his brother Martin, alongside Belfast punk veterans Petesy Burns (Stalag 17) and HP Isotope, reformed The Outcasts. On the verge of major European and Japanese tours, and the release of their anthology Tell Me the Whole Story, I sat down with Greg to talk about the legacy of The Outcasts, Belfast punk, and second acts.” –Kevin Dunn

One Punk’s Guide to Standup Comedy by Tyler Sonnichsen

“It was a late night in March 2018. Sean Simoneau and I sat in our rental car outside of a White Castle on the periphery of Cincinnati, devouring drive-thru food, dreading the four-hour drive home, and recounting the our recently ended tour. As comics are predisposed, we dwelled on the negatives before arriving at the net positives. We had an epiphany: Over the previous six nights, we’d done six different kinds of shows in six different kinds of venues. We’d co-headlined at a house show in Indianapolis, the back of a hipster BBQ joint in Pittsburgh, a cavernous sports bar with a stage perched above the bar in Cleveland (well, Lakewood), the basement of a college pub in Kent, the back of a pizza place in Columbus, and a showcase at Go Banana’s Comedy Club in Cincinnati (well, Montgomery). No two of these shows felt terribly similar in tone or composition, but it still felt like a solid tour by our standards. We made a little money, met some funny and talented people, and even bumped into Hot Snakes at our hotel in Cleveland. That was neat.

Standup comedy is difficult to write about because it’s an art form that can be so many things to so many people. Some view it as an admirable art and an essential outlet; others see it as vocal noise pollution for the self-indulgent. It stems from the world’s oldest form of entertainment (one performer saying insightful things to a captive audience), yet seems among the least respected. Standup suffers from the widest gap between insider and outsider perceptions, exacerbated by an internet noise machine that builds echo chambers and convinces comics the “general public” or “civilians” think about this shit the same way we do. It’s perpetually exhausting and at times infuriating.

The last time standup comedy was a genuinely lucrative proposition in the United States, an army of vultures swept in, homogenized, and mass-marketed standup into an ossified iconography that it still shoulders today. If you don’t already know what I’m talking about, try to sit through the cavalcade of garbage on An Evening at the Improv (1982-1996). For every brilliant young comic on there, there were five Seinfeld rip-offs who got through with zero risks and even less charisma. It almost felt like a growing club system and growing financial spoils for people on the periphery of the art diluted the quality of what was easily available and elevated less scrupulous performers with less substance to higher levels of success. If you’re a punk musician or DIY practitioner who feels like a lot of what you’ve read so far sounds familiar… well, it should.” –Tyler Sonnichsen

Donna Ramone is cleaning the bathroom of equity, diversity, and inclusion. (instagram)

Sean Carswell reaffirms the life of “small crowds, no lines, and skateboards.” (instagram)

This is part one of a three-part in memory of series for Efren Almaraz and Nipsey Hussle in collaboration with the Watts Poets and Puro Pinche Poetry.
Special thanks to guest editor hermana Maria Carmier.

James Spooner wants it to end at the end. (instagram)