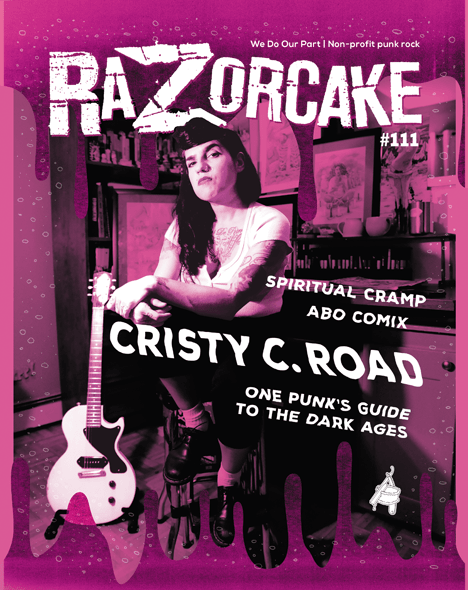 Cristy C. Road: Interview by Todd Taylor and Ever Velasquez

“We were fortunate to catch up with Cristy C. Road while she was on her West Coast Sister Spit reading tour. Cristy’s a Cuban–American writer, musician, ponx mujer, visual artist, zine maker, Razorcake contributor/supporter, professor, and illustrator who channels her own bruja energy in Brooklyn, New York.

Cristy has always been someone I’ve admired as an artist who can bring so many distinct threads together in her work. She’s able to combine Latinx cultura, ponx, art, and zine-making while being unapologetically queer. Green Zine was born in 1997, which was her own inked dedication of her love for the band Green Day. It later became an outlet for her to share her voice as a Latinx queer abuse survivor and her personal journey of self–growth. She currently fronts the band Choked Up, which has taken off from where The Homewreckers left off in 2016. Pull up a seat and let’s get into the world of Cristy Road. There will be plenty of surprises, shared memories, remembrances of Lookout! Records, and insights into how she’s able to make it all happen and make it look easy.” –Ever Velasquez

Spiritual Cramp: Interview by Tim Brooks
“It’s hard to wax lyrical about fools you see in the bar every week. When they told me they had a band, I rightfully ignored them and got another round in. When I actually listened, I was floored. As my favorite uncle, Steve, said, “This sounds like then… but now.” On wax, Spiritual Cramp managed to somehow harness forty years of punk and indie into one cohesive thought: The Ruts, New Order, Talking Heads, Dischord Records, hardcore, new wave. Somehow, through the insane mind of Mike Fenton, they have taken “then” and made it “now.” The live shows are incendiary—with Max and Bingham’s leaps and the heartfelt trust between them and the audience. They are a bunch of dickheads, but I love them.” –Tim Brooks

“Prisons are not only designed to keep prisoners inside. The walls topped with razor wire and armed guards also keep those of us on the outside from looking in. The prison system is isolated by more than just physical barriers. Those are too easily overcome. There are also walls built into the ways we talk about justice and policing. More walls are erected in jokes told about the suffering that goes on in prison cells, never funny to those experiencing the pain and shame. There are also barriers in the way law and order is presented on television and in movies and in the cynical speeches politicians offer in response to tragedy. We start building these walls early in the stories we tell our children about work, education, poverty, and human difference. All of these products of American culture, puritanical religion, and the Western caste system work to ensure the twenty-two percent of the world’s prisoners—living within the United States—be gone and forgotten as they provide cheap labor for multi-billion-dollar corporations.

I first came across ABO (short for abolish) Comix for a grad school project as I researched organizations working against this complex and ruthless system. Co-founder Casper Cendre and a small group of volunteers based in Oakland, Calif. publish comics by queer prisoners with the hope their stories are heard and not be forgotten. Rosie and I left the interview with a handful of letters from people inside prison thanking ABO for allowing their stories to be told, sharing community and friendship, and for shining a light in the dark.” –Jon Mule

One Punk’s Guide to the Dark Ages by Billups Allen

You can fall at the first hurdle discussing “The Dark Ages” with historians and/or “historians.” A lot of people contest the nickname given to a period between August 24, 410 C.E. and the time leading up to around 800 C.E. when people across Europe were not prospering. Much like the term “new wave,” serious people will not acknowledge your discussion of “The Dark Ages” without trying to convince you not to use the term. It’s hard to ignore the period of roughly four hundred years after the fall of the Western Roman Empire when very little progress was made in science and literature. People struggled year-round just to feed themselves. If you weren’t royalty or one of the very few who had money, raw survival was your main concern. People without money barely ate. Reading was monk’s business; few people of upper or lower stations saw any reason to learn. There was a general lack of food and community. There were few leaders or organized governments to which to turn for help. Disease was also around every corner.

For those living in this era, you waited for improvements in your situation that were never going to arrive. Things didn’t change much in your lifetime. People lived hard, short lives in seclusion. This led to a certain amount of naiveté. As suggested in Monty Python and the Holy Grail (1975 C.E.), you were liable to believe anything anyone with a clean shirt on had to say. If starvation or disease didn’t get you, you were also under threat of being in the path of roaming bands of barbarians unconcerned with your problems. You were a sitting duck as a farmer and reliant on robbing if you were a soldier. Dangerous bands of marauders informed you of their presence by stopping in and killing you on their way through town. Europe was in a state of nearly constant war. Groups like the Visigoths, the Vandals, the Saxons and others whose legacy would go on to inspire cool band names were almost always on the hunt for a community to trounce or at war with each other. The Vandals, for example, were an Eastern Germanic tribe occupying much of what is now Poland. The Visigoths, major players in our story, were more at play in the West. If you were organized at all, you were eventually going to war with other Europeans. The low population meant you could only organize so much in your own defense.

Thousands of years of Roman progress became relatively useless. Much like you still can today, you could go back to Rome and examine the remnants of society: the roads and monuments and aqueducts and statues. But at the time it didn’t mean much; you had little context to understand why they were now essentially outdated. There weren’t enough people to maintain lines of communication. People were isolated. Without anything at all to serve as a center of thinking, villagers believed strange things about the world around them.

This piece is meant to introduce some key names and events, and how they seeped past a major block of time, only to return Europe back to a position where there was enough time and energy among the citizenry to ruminate on anything beyond surviving. So if you’re at a party and someone contests your clever timeline regarding the Dark Ages, just remember if they’ve read more on the subject, they have less to do than you do. –Billups Allen

Sean Carswell surfs his way out of a careerist undertow. (instagram)

Designated Dale, despite the accusations, knows how to read.

I
have been silent about who I be
the
light that emits from my soul dimmed
quiet,
afraid of being wrong
afraid
of being right, afraid of the world...

This issue’s poetry was submitted by Watts Poets, a group of high school students from South Central Los Angeles who, with the help of their English teacher Bridget Valles, created a poetry class to help educate, empower, and inspire other students to find and express their voices through poetry. Their poetry reflects daily life in their neighborhood.

James Spooner tries to peacock in a world of insecure flamingos. (instagram)