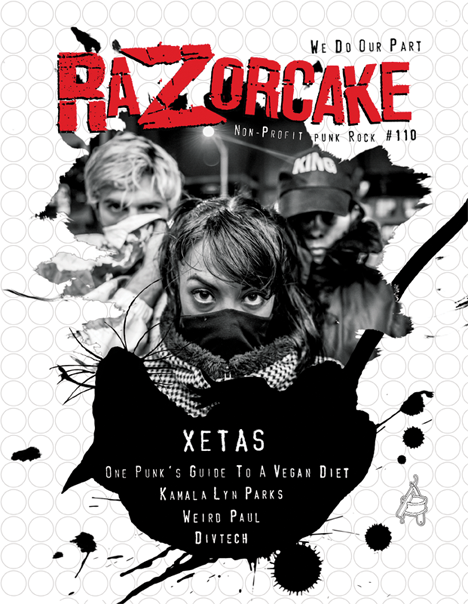 “Texas’s Xetas have created a signature sound. Their music makes me think back to the punk pioneer days when there were no direct antecedents to the music punks made; bands pulled from overlooked and obscure corners and cracked them open, filtering as much inspiration from sound as they did from attitude, intention, and purpose. As much as I love and listen to classic punk, I’ll never be thirteen again in 1985, hearing it for the first time. It’s a special band that’s contemporary—sonically unmistakably a punk band playing fast with volume, noise, and force—but not just another one where a Jr. Punk Detective Kit will pull fingerprints of the usual suspects of past giants from their equipment.

Yet, fuck me if I’m not partially stumped on how to satisfyingly explain to you what Xetas do sound like. They incorporate male/female vocals and sound as if Leatherface was hell-bent on destroying music. It’s unconventional, weird-addictive-melodic punk pushed one step further. It also makes perfect sense to me that they’ve opened for both Superchunk and Mudhoney.

After doing this interview, a possible key to a deeper appreciation of Xetas is they harness the artistic iconoclasm and aesthetic limberness of Kate Bush and the raw electricity sparking from Public Enemy’s Fear of a Black Planet—while sounding nothing like either. Xetas are a celebration of punk that doesn’t rely on cheap idolatry of past greats for direction, doesn’t need to conform to wearing-thin musical uniforms to be heard, and isn’t in a musical suburb where all we’re doing is waiting to die.” –Todd Taylor

“Screeching Weasel told us in 1991 that Kamala’s too nice, but a short punk song couldn’t do justice to the multiple ways Kamala Lyn Parks helped shape punk as we know it today. She has been involved with some of the most important moments in Bay Area punk and beyond. Kamala was actively involved with Maximum Rocknroll early in the zine’s history, contributed to the establishment of 924 Gilman Street, and played in a range of exciting touring punk bands.

Amid these well-known projects are also lesser-known contributions to the DIY touring network. She created a model for what it meant to book one’s own life and how to tour in ways that fleshed out networks of social trust. Opportunities for today’s bands to book DIY tours can be traced to her work booking bands. And many of those bands would go on to change the conversation about what it means to be a punk and to do punk. While Kamala continues to play in punk bands (old and new), she also has used her vast knowledge and experience in the punk scene to inform important work in Bay Area transportation planning. It was a thrill to talk with Kamala about her life in punk and to learn about the links between her diverse experiences.” –Daniel Makagon

“In 1986, a fifteen-year-old Pittsburgh kid with a guitar, boom box, and tape recorder cranked out some lo-fi rock songs about potato borscht, a deaf nun, and his father’s toe.
Thirty-two years later, Weird Paul still goes by the same name, still records from his home, and still strives for lo-fi. Despite the songs being composed and performed better, they are still very silly: “This Guy’s Got a Bone Disease,” “I Got Drunk at Chuck E. Cheese,” and “Jolly Rancher (Stuck in Your Hair).” He also somehow managed to write one of the catchiest songs ever written about peanut butter and has recorded fifteen-plus full-length records, with one being released on Homestead Records.

Besides being an eccentric rocker, he also has been recording his life via cassette recorders, video cameras, and his journals since he was very young. Weird Paul posts these memories on YouTube. They are entrancing and poke at every nostalgic sensor in your brain.

I mostly wanted to talk to Paul about his music, but we ended up covering his internet presence, Daniel Johnston, WebTV, and the new documentary about him.” –Rick V.

“The first time I saw Divtech was a couple years ago at Autonomous Mutant Festival, an annual unpermitted gathering in the forests of the West Coast. Its origins were a hotbed of radical thought and a gathering of anti-authoritarian subversives based on the transgressive concept of the temporary autonomous zone. It’s also a place where old friends come to party—a fun party, a worthy party, and a necessary party. It serves as a family reunion for me and my reset button.

It was here I first saw Divtech, armed with a laptop, a mic, and a head full of youthful rage as he screamed his anti-authoritarian, anti-capitalist screeds over fast, frenetic electronic music that crashed, screeched, and rattled. It definitely shook up some of my own complacency and comfort and reminded me of what I was looking for when I first attended the festival over twenty years ago. It was relentless, chaotic, noisy music that spoke with the urgency and fervor of punk rock. It was angry and ugly with an impassioned immediacy putting to rest stereotypes some American punks have of electronic music being soulless, repetitive, and apathetic. I wanted the punks to know all about it and nailed down an interview with Divtech. While doing research, I found Divtech’s albums came with zines full of essays that explained his songs intellectually and emotionally, with the fervor of ’90s emocore or an ’80s peace punk band. He makes the kind of art that will challenge you to get out there and do something if you give it a listen.” –Craven Rock

One Punk’s Guide to a Vegan Diet by Todd Taylor

It happened gradually, at a rate so slow I didn’t really notice it was happening. I gained weight. It happened over the course of a decade, due to working all the time and not paying too much attention to the food I ate. I wasn’t feeling very good. I was a workaholic. I didn’t exercise much. I walked. I skated. I got injured repeatedly. I just kept eating like when I was a kid.

Ten years ago, my health problems caught up with me. For the first time in my life, I had high cholesterol and high blood pressure. My skin and respiratory allergies were horrible. I was thirty pounds heavier than ten years before and was still gaining weight. I went to my doctor for a physical and she wanted to prescribe medication. I’d done a bit of research before my visit. Admittedly, it wasn’t much. I’d read The China Study: The Most Comprehensive Study of Nutrition Ever Conducted and the Startling Implications for Diet, Weight Loss, and Long-Term Health by T. Colin Campbell.

“Isn’t it true that every single animal cell contains cholesterol—and all animal foods contain cholesterol, like meat, milk, and cheese?” I asked my doctor.

“What if I stop eating those foods? Would that lower my cholesterol?”

She hesitated and let out a sigh. “Maybe a change in diet will help, but these pills are specifically designed to do just that.”

“I’m worried about the side effects. I don’t want to be on pills for the rest of my life. Give me six months and I’ll do another blood test.”

She sighed again. “You can try. Even if you eat a completely cholesterol-free diet, your body will still make cholesterol. We just need you to get into a healthy range.”

I had been vegetarian for a short time during high school, but gave it up when I felt lightheaded and generally not great. Admittedly, I didn’t change my diet much; I just didn’t eat meat.

For the six months between physicals, I ate meat once a week. I was hooked on chicken burritos. I tried to remember to exercise—to exercise for exercise’s sake, not just hauling boxes, getting laundry done, or walking to the video store, the library, and the local donuttery—but I was still working twelve to fourteen hours a day, six days a week.

Also at that time, although I knew, intellectually, I didn’t want to cause harm to animals, I continued to eat them. I’ve never killed and plucked a chicken or slaughtered a hog, but I was an excellent barbequer. I wish I could honestly say I initially stopped eating meat due to mass slaughter, inhumane conditions, and the harm meat-eating is doing, to the point of changing the global environment, but that just isn’t true. I liked the taste of meat, cheese, and dairy. They were cheap. They were readily available in the working class neighborhood I lived in. They were a short walk away.

My dad, who is a master scrounger, helped me back into cycling. I’d largely given it up after college. Los Angeles is a dangerous place to cycle, even more so a decade ago. I slowly incorporated cycling into my day-to-day activities.

My return doctor visit six months later was deflating. I was hoping the conspicuous yet admittedly slight modifications in my diet would miraculously improve my health. They didn’t. –Todd Taylor

Donna Ramone knows that “ally” is a verb. (instagram)

Jennifer Whiteford exposes a child to evil over pancakes.

This issue’s poetry was submitted by Watts Poets, a group of high school students from South Central Los Angeles who, with the help of their English teacher Bridget Valles, created a poetry class to help educate, empower, and inspire other students to find and express their voices through poetry. Their poetry reflects daily life in their neighborhood.

This issue is dedicated to the memories of Kacie Sosebee