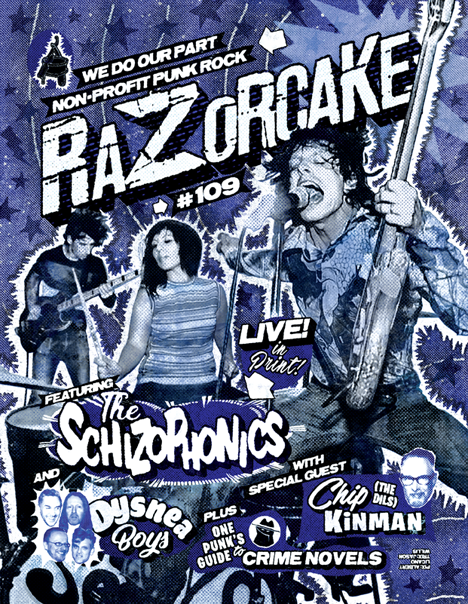 “The Schizophonics are a band that blooms hard. From the first note, their live show is a turbo-charged, bombastic display of true blue rock’n’roll chaos. The first time I experienced this I had no clue what was about to happen. I had been watching half sets all night, preoccupied with what was happening in the social circles outside rather than bands on stage. But when these three soldiers of rock took the stage and began the ceremonial sacrifice of their own well-being for the fervent hunger of the forty-five or so people who had amassed before them, I wasn’t going anywhere. After that night I listened to the records. It’s not just a wild live show; the songs are fantastic too! Gritty garage punk, heavily influenced by classic rock, soul, and the psychedelic underground. And beyond the show and the songs, there’s just no way you can find a group of sweeter, more dedicated, and more grateful people.

Let this be your final warning: Don’t miss this band.” –Daryl

“I first saw Chip Kinman sing and play guitar when I was a student at UCLA in the mid-‘80s. I was a big fan of Rank And File, the genre-defining cowpunk band formed by him and his brother Tony (the bass player with the booming baritone), before I knew about The Dils, the first-generation and hyper-political punk band they also co-founded. I was excited to check out their noisy industrial duo, Blackbird. They were great. Buried beneath the thundering drum machine beats and layers of squealing feedback and pitch-black lyrics inspired by Cold War fears, supply-side economics, and trickle-down culture was the sweet signature harmonies only siblings can create. The students at the campus pizza joint who wanted full stomachs, not ringing ears, weren’t quite as stoked as us fans.

A few more bands, genres, and decades passed before I reached out to Chip, wondering if his brand new band, Ford Madox Ford, would play a benefit show to support the music program at my daughter’s elementary school in Chinatown. The idea was to carry on the punk rock tradition of the neighborhood’s old Hong Kong Café, and The Dils were a big part of that story. Chip said yes, his punk-fueled post-blues combo has played for us twice since then, and our families have become friends.

Of course, I had to invite Chip to the Razorcake headquarters, where he shared his journey as a lifer in the underground and talked about being in punk since the beginning, playing in bands with his brother for decades, losing Tony to cancer, and creating music into the future. Who knew that he would re-form The Dils shortly afterward with his son on drums and Giulliano’s friend Brian on bass, or that their first show in forty years would be at our next Save Music in Chinatown benefit show? And so Chip’s story continues as it began.” –Martin Wong

“On a rainy, grey afternoon (there are no other kinds of afternoons in Berlin) just outside of the city, I went to the most DIY skater punk venue I had been to since I moved away from Los Angeles and had the pleasure of watching the Dysnea Boys for the first time. Dysnea Boys definitely sound like early ’80s, slightly polished West Coast punk with some post-punk bass lines fit for Christian Death and a few pretty great reverby moments. They have this badass, garagey sound that’s rough enough to stimulate the adrenal glands (in the best possible way), but sophisticated enough to still sound phenomenal in even the dingiest of venues. I introduced myself to the lead singer, Jason Honea, after their set and he talked to me about seeing My Bloody Valentine before they were called My Bloody Valentine as we shared cigarettes and drank gin out of huge novelty plastic cups. It turns out Jason is a California native and the former lead singer of influential Bay Area ’80s punk band Social Unrest. The rest of the Dysnea Boys come from all over the western world, which definitely adds interesting dimension to their sound. I followed them around to various venues before finally sitting them down in their tiny practice space for this interview.” –Monique Poirier

One Punk’s Guide to Detective Novels by Sean Carswell

“Razorcake probably wouldn’t exist if not for the crime Jim Ruland and I plotted twenty-four years ago.

I’d just moved to Flagstaff, Ariz. to attend one of the least prestigious graduate schools in the country. Jim was already a year in the program. He caught up with me as I sat outside the student union, waiting for my student ID to print. We’d never met but had sat in the same room for several hours the day before. It would’ve been awkward not to talk. I did what grad students in English do: I asked Jim about the books he liked to read. Jim did what grad students in English never do. He started talking about crime novels.

I love crime novels. I love them now and I loved them then. When I was a teenager, my dad turned me on to Mickey Spillane. I couldn’t really get behind Spillane’s protagonist, Mike Hammer. At the time, I didn’t have the words to express my problems with Mike Hammer. Now I recognize that he’s a festering sore of toxic masculinity. Still, the books rocked. Everyone was tough. Even the prose was tough. It told me exactly what I needed to know and no more. It whipped me through a world of pure id. And Mike Hammer was a dick, for sure, but he was an entertaining one. Nothing like the books I was assigned in high school classes, shit like Catcher in the Rye and The Great Gatsby. The protagonists from those books were dicks oozing toxic masculinity, too, but they were rich dicks whining their way through a world of privilege. At least Mike Hammer seemed like a guy I might run into in real life.

Jim told me, “If you like Mickey Spillane, you gotta check out Jim Thompson. He’s a hundred times better.” Then Jim confessed to me his plan. He wanted to write crime fiction that was literary. I knew what he was talking about. I’d just finished reading Thomas Pynchon’s V., which is basically a literary spy novel. The whole time I was reading it, I daydreamed about doing the same thing, only with crime fiction instead of spy fiction.

So this was the plot we’d both developed without having met each other or even existed within thousands of miles of each other.

Neither of us mentioned punk rock in that first meeting. That happened later. I walked through downtown looking for a place to grab lunch. Jim and his roommate drove by. His roommate stopped and offered me a ride. I hopped in. Big Black was playing on the tape deck. I’d found my tribe.” –Sean Carswell

Donna Ramone considers the double down of douchery. (instagram)

Designated Dale goes for a drive with Little Richard and Chuck Berry.

A selection from:
“Cosmos in the Mundane”

“I have never taken shrooms but I have
eaten them. I hear they reveal the cosmos
trapped in the mundane, blurbs of neon color.

Spicy! I chew white slick mushrooms dripping
a thick coconut lemongrass broth. I am vegetarian
after he explained why he doesn’t eat

animals. I love his black dog named after
an anime character, yet I only met Kirito
San once. Is that how love works?”
—Féi Hernandez

Jamaica Dyer is practicing the art of not being. (instagram)

This issue is dedicated to the memories of Mike Guerrero, Lorna Doom, and Debi Martini