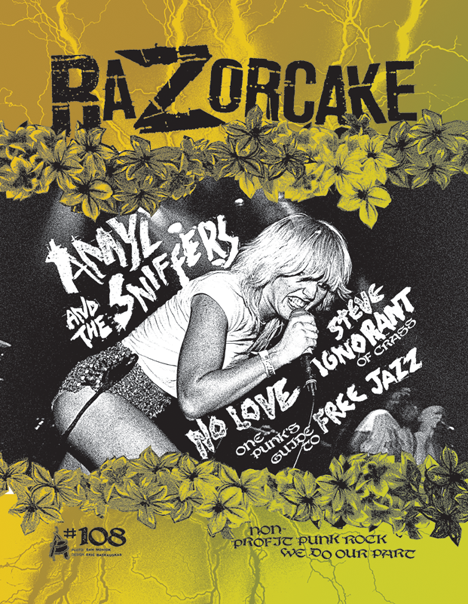 Razorcake 108, featuring Amyl And The Sniffers, Steve Ignorant of Crass, No Love, and One Punk’s Guide to Free Jazz

Amyl And The Sniffers: Interview by Todd Taylor

Amyl And The Sniffers—live or on record—are like getting struck by lightning. You may not know what just happened, you may lose a shoe from the impact, but you won’t soon forget them.

A stark and brilliant contrast, a little bit out of nowhere, Melbourne’s Amyl And The Sniffers play the type of punk that’s primitive, sharp, and uncomplicated but incredibly effective. If you want difficult literature set to music, or music that needs to be explained, look elsewhere. If you crave live wire, chew toy-simple contemporary punk and want to sing along to songs about stolen bicycles, lost love, munchies, and self-empowerment, their songs will make your ears glow blue and your eyes to spring out of their sockets.

Due to their Australian pedigree, I hear a through-line of Cosmic Psychos, Bits Of Shit, Ooga Boogas, and early Eddy Current Suppression Ring with one important difference. This band-gang is fronted and led by a woman, Amy. There are more than just common punk weather patterns when Amy sings, “I’m not a loser.” As the backups kick in, The Sniffers form a united front and refrain, “She’s not a loser!” It’s 2019 and it sucks that Australia’s history of wonderful punk music has largely been bereft of strong female musicians. (Thankfully, this is changing.) What you hear and see of Amyl And The Sniffers is directly from their brains and fingers out into the world without the capitalism-calculated gloss and predatory slime of the music industry. Self-representation makes all the difference in the world.

Turning gutters into butter and lightning into electrifying music, say hello to Amyl And The Sniffers. They’re folks you can trust. –Todd Taylor

Crass. What a band and the quintessential anarcho punk music collective. Over forty years after their formation and they still elicit strong reactions, ranging from unfettered and well-deserved fandom (gauged by the number of tattoos and butt flaps worldwide and my worn-out copy of Penis Envy), to the entire spectrum of critical appreciation as one of England’s most important bands and on down to outright dismissal as “unlistenable noise.” In comparison, their musicianship made the Sex Pistols sound like ELO and, to me, that’s a thing of absolute beauty.

There’s something to be said of a band that, for a time, sold more records than AC/DC, was being monitored by Margaret Thatcher (previously classified documents were released in 2014), and bypassed roadies in favor of giving out homemade sandwiches and tea to folks who helped lug their gear at shows. Crass lived their slogans of anti-capitalism by attempting to control the price of their records on their own record label by putting “Pay no more than…” on the cover, opted to play community halls and non-conventional places instead of established clubs, and paid fanzines out of their earnings while shunning—and deliberately fucking with—the national media.

A young Nardwuar first discovered Crass while listening to the Flex Your Head punk show on CiTR in Vancouver years ago. Crass made him smile. They had short songs. The seed was planted. Thanks go out to Melanie Kaye for connecting the dots between Crass singer Steve Ignorant and Nardwuar and getting them in touch. Since Steve has never been to Vancouver, he called into Nardwuar’s radio show and patiently answered over an hour’s worth of questions.

I think Nardwuar puts it best when considering the band: “Everything has been done before, but there will never be another Crass.” –Todd Taylor

No Love: Interview by Vincent Chung

For the past two decades, the punk windfall in Raleigh, N.C. catalyzed a hotbed of activity: house shows everywhere, an explosion of punker imports, and lots and lots of bands. A few of those acts garnered recognition outside this cluster of sleepy college basketball towns: Double Negative, Whatever Brains, ISS, and Davidians.

No Love is a story about five divergent personalities and a cat. All of the band’s players have lingered around this prolific punk scene for awhile, enough to warrant some veteran hype upon No Love’s advent. Singer Elizabeth Lynch cut her teeth promoting events and DJing at local clubs. Guitarist Daniel Lupton founded and operates Sorry State Records—a punk-minded record store and label that is a central hub of the scene’s infrastructure. Guitarist and Elizabeth’s husband, Seth Beard, was in Logic Problem and works at the aforementioned Sorry State. Chris is in the local staple indie-noise duo Naked Naps. Osamu was in Antibubbles. Tobio is the muse.

Hype isn’t always a blessing. No Love took time to find its voice, and, for a while, carried the stigma of the perpetual opener for all the good punk shows. Once traction started sticking, the band immediately took off—its five brains firing on all pistons. Five years later, all this culminates on their debut LP, Choke On It, a relentlessly potent jolt of hardcore that careens manically without wasting riffs. With a glut of ideas, the band takes lots of chances, but never loses a sense of fury. –Vincent Chung

One Punk’s Guide to Free Jazz by Mike Faloon

Emerging at the dawn of twentieth century, no one knows exactly who started jazz or precisely when it started. But all paths lead to African-Americans, specifically black Creoles, living in Jim Crow New Orleans. Using rhythms and melodies from Africa and the Caribbean, they drew on ragtime, blues, marches, work songs, spirituals, and waltzes.

As with any great leap forward, particularly one emanating within an oppressed and ostracized community, jazz met with resistance from the outset. Opponents spewed racist and classist arguments, decrying the music’s “bad taste” and claiming this African-American art form posed a threat to “middle class” (nay, white) values. Meanwhile, a number of white musicians formed their own bands, co-opting the sounds of their African-American contemporaries. Some went a step further and had the audacity to claim credit for creating jazz.

But as we’d later see with rock’n’roll, punk, and hip hop, the gatekeepers didn’t wield all the power. Jazz spread rapidly: Chicago, New York, Kansas City, Philadelphia, Los Angeles, and countless cities in between. Across the decades, attempts to denigrate jazz and its creators persisted (and persist), but over time a jazz cannon emerged. Jelly Roll Morton. Louis Armstrong. Duke Ellington. Billie Holiday. Charlie Parker. Miles Davis. John Coltrane. These iconic figures and many others faced countless obstacles as they defined and refined America’s greatest artistic contribution to world culture.

And they’re just the start of the story. Jazz has evolved in many directions since. I would argue the most compelling of these subgenres is free jazz. Most renderings of jazz history give short shrift, if any consideration at all, to free jazz. Most read like a history of punk that skips from the Sex Pistols to Nirvana and ends with Green Day. Much of the best punk exists beyond the common narrative. The same holds true for jazz. –Mike Faloon

Designated Dale reflects on the finest films of 1979 and doesn’t smash a single pumpkin.

Bianca dusts off her cargo shorts and remembers what friends are for.

“I live in a BROWN NEIGHBORHOOD
Where I don’t wake up to an alarm like most... instead it’s the sweet call of TAMALES!! CHAMPURRADO!! any day of the week. Uno elote por favor! Con crema y queso fresco. Breakfast a la mano.”
–Ever a.k.a. the girl about town