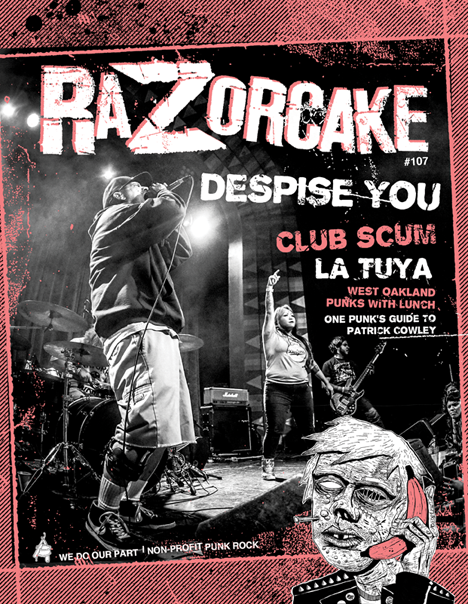 Despise You: Interview by Juan Espinosa and Daryl Gussin

“During the early ’90s Despise You were a band whose members identities were shrouded in a thick haze of rumors and secrecy. Outlaws using a band as a cover? Powerviolence supergroup? As the years went by and the internet forever destroyed privacy as we once knew it, the cat was out of the bag. Chris Elder (of Pessimiser fanzine which would later also be the name of his record label), Phil Vera (Crom, Fresh American Lamb), and Rob Alaniz (Rise) came out of the shadows with new recruits Chris Dodge (Spazz, Slap A Ham Records) and Cynthia Nishi (Gasp) and gave the fans what they’d been wanting: the live madness that is DY.

After countless shows since their very first at Murderfest in 2007 and a string of new recordings (the first of being some demos that were later re-recorded for a split with Agoraphobic Nosebleed in 2011), the band has since settled in with their core members of Chris, Phil, and Cynthia as well as young bloods Jorge Herrera (ACxDC, Infest) and Andrew Solis (Deadbeat). I picked Chris up from his pad in Inglewood and we drove for more than an hour and a half through the snarling beast of Los Angeles’s traffic (coincidentally there was a Dodgers playoff game going on just a few freeway exits away) to meet up with Phil and Cynthia at Razorcake HQ. We discussed several key issues, such as the beginning of their friendships with one another, their motivation to continue playing/writing, and punk toilets and bathrooms from around the country and around the world.” —Juan Espinosa

Club sCUM: Interview by Ever Velasquez and Daryl Gussin

“Have you been to sCUM?” is the question I’ve been asked consistently since their second anniversary show by hermanx, who have yet to take in sCUM in all of its queer, POC glory. Daryl and I got a chance to have a great conversation with sCUM’s creators Rudy Bleu and Hex-Ray to talk about everything from zine making, party life, and the best queer, POC monthly party nestled in our own barrio of East Los.

A party where all the rumors you’ve heard are true and then some. A dark, sweaty nightclub playing the best in everything, while all the beautiful ones—because everyone here is dahling—dance the night away in the best DIY street couture. The go-go lovelies—especially their very own resident dancer, Taco—make you stop dead in your tracks, as they mesmerize you with their interpretive dance movements. Top resident DJs and loved music icons mix it up. And don’t forget the floor show right at the stroke of the midnight hour—hosted by the hostess with the most ass—Lady Forbidden, welcoming local, fresh talent as well as seasoned queens, like the beauties on RuPaul’s Drag Race. Remember: If you dare come here, respect the neighborhood and the sCUM familia. Tip your bartenders, the talent, and be prepared to sweat your makeup and clothes off (with consent).] —Ever Velasquez

Punk… it’s paradox after paradox. True individuality still comes at a steep price. Legitimate lifers often remain outliers in scenes they helped create. Genuinely fantastic and exciting bands can thrive in the shadows of concrete freeways designed by racist policies to suffocate vibrant, poor working class immigrant neighborhoods, while directly west, Los Angeles, “The Entertainment Capital of the World,” looms like a blocky cluster of erect penises. Being born on the wrong side of the tracks (like literally ten different tracks; it’s a massive rail yard) and a concrete river is another set of realities. Nope, this interview is not one solely of legitimate gripes and despair. It’s about the power of remaining angry and engaged without that anger fully corroding hope, dignity, or compassion. It’s about three punks-without-prefix-or-suffix.

When I listen to La Tuya, I hear the grand tradition of East L.A. backyards. I can almost see the dust rise up from the pit as they blast from my speakers. The band is smart, funny, and pissed while their music sounds like blunt instruments honed to sharp melodic points. Think The Stains meet Big Drill Car. Their songs oscillate easily between both Marxes—Karl and Groucho.

La Tuya’s pedigree is decades-long, peppered with bands that mostly never had the benefit of legitimate releases when they were active—Butt Acne, Black Jax, Ollin, Our Band Sucks, Peace Pill, and Charm Machine, to name a small handful. Fuck urban colonizers planting branded lifestyle banners in “just discovered” neighborhoods. Resist gentrification and globalization. Celebrate a preexisting beautiful culture—punk and otherwise—aware and respectful of the Tongva, yet leery of all shades and hues of nationalism. Revel in the punk truism that some of the best bands will never be heard beyond their own neighborhoods. Say hello to Jimmy, Scott, and Dale.
La Tuya!]—Todd Taylor

Every Sunday at a West Oakland communal-living warehouse, a group of people gather around a kitchen table, prepare sandwiches, and gather supplies to distribute to their local homeless community. But this isn’t your typical, church-inspired, assembly of do-gooders serving the less-fortunate. This group of individuals with their tattoos and nose rings, mohawks, and band shirts, are slathering peanut butter and jelly onto bread while listening to The Minutemen, discussing the various punk shows they all attended the previous night. The group calls themselves the “West Oakland Punks With Lunch,” and have dedicated their Sunday afternoons every week for nearly three years to putting together sandwiches, snacks, pet food, hygiene products, and harm reduction supplies to later distribute to people living in homelessness. There are volunteers who have been there since the beginning and there are first-timers, all pitching in to slice tomatoes, cut the cheese, joke about cutting the cheese, and scoop dog food into ziplocked bag portions.

A few punk albums and cigarette breaks later, forty PB & Js and forty turkey sandwiches have been prepared and bagged. Bananas, apples, granola bars and dog food are organized into boxes, and the “prep” part of the day is finished. Before going out to the “distro” portion of the day, the group comes together to go over guidelines—one of which is, “no ‘-isms’ are allowed. All the bad ‘isms,’ we don’t wanna hear ’em”—among other basic rules like giving out one to two sandwiches per person. Alejandra, the founder of Punks With Lunch, adds thoughtfully at the end of the meeting, “The last thing I want to say is thank you for being here.” As everyone disperses she yells out, “And it’s okay to make mistakes!” There are smiles all around and some sporadic cheering and clapping.

After loading up some cars, the group heads over to their usual spot under the freeway near a homeless encampment where Punks With Lunch station themselves with fold-out tables and personally hand out the goods to anyone who approaches. They may not look like your typical volunteers but they are definitely doing our West Oakland homeless community a hell of a lot of good. But possibly the most inspiring aspects of the organization is their non-judgmental approach, their welcoming attitude towards participants and volunteers, and their perseverance in the face of what seems like an endless problem.]—Rosie Gonce

One Punk’s Guide to Patrick Cowley by Billups Allen
In 1978 a DJ subscription-only remix of the already popular Donna Summer song “I Feel Love” went out in the mail. It was 15:43 long. The bass line was looped so overdubbed synthesizer effects could be added. This particular version of the song went largely unnoticed by the general public and did nothing to make producer Patrick Cowley a household name. But dancers in nightclubs reacted. They may have been unaware and/or unconcerned about what they were hearing, but they reacted. They danced.

The first time I heard the name Patrick Cowley I was in a band with a friend in Brooklyn. She figured out songs to cover and brought them in without playing the originals for us. Thinking the mystery was fun and not being totally internet savvy at the time, it was a while before I heard Cowley’s original version of “Teen Planet”: a boppy rocker released as a single for his label Megatone Records. The song came across as Devo-inspired to me, with sci-fi lyrics and bouncy melodies carried on a raspy-sounding keyboard. Years later, I discovered Devo to be devotees of Cowley’s sounds and his seminal dark electronic album Time Warp. Cowley’s interests spanned a range of music. During his short career, he released electrocuted versions of rock’n’roll, morose electronic masterpieces, and quality pornographic soundtracks. But Cowley is best known as a disco producer who broadened the definition of electronic dance music.] —Billups Allen

Rev. Nørb and the close encounters of the worst kind. (website)

Designated Dale puts another dime in the jukebox.

Puro Pinche Poetry: Gritos Del Barrio (Edited by Ever Velasquez (instagram) and Eugenia Nicole (instagram)
A selection from:
When our bodies are weapons
(For Jesse James Romero)

Rhythm Chicken made me realize my local soup purveyor is judging me. (facebook)

This issue is dedicated to the marriage of Matt Braun and Sarah-Beth Zoto.