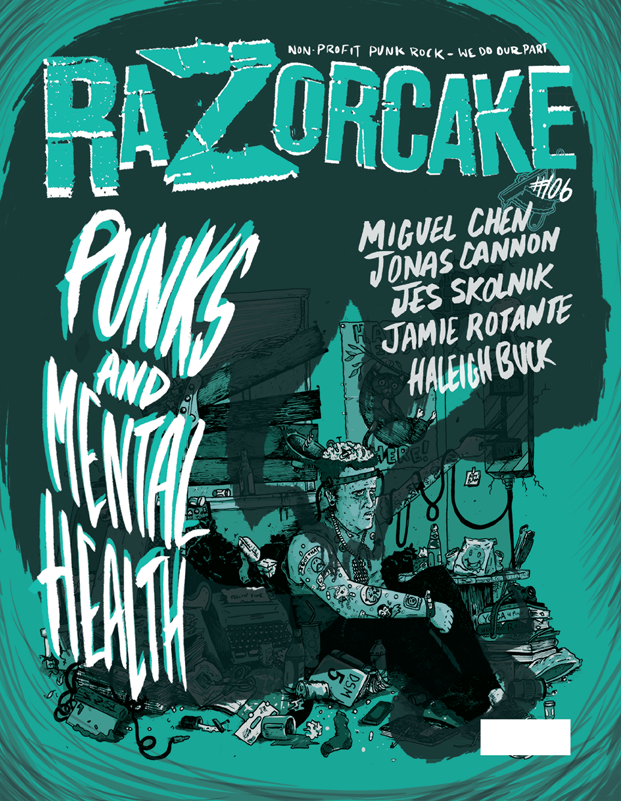 Get it right here!

“…In late 2016 I threw myself into writing and speaking about my mental health. I began with comments on social media. It grew to me sharing my experiences at storytelling events such as The Moth and in articles for some websites such as The Mighty and Tonic. I’m not sure what caused me to want to share all this, but it’s been very rewarding and gives me purpose and meaning.

I knew there had to be a way to talk about mental wellness through Razorcake. The punk scene is not immune to mental illness. If anything, it seems to attract more people who deal with anxiety, depression, obsessive-compulsive disorder, and post-traumatic stress disorder (to name a few).

One of punk’s many strengths is its ability to be straightforward with its thoughts, emotions, and ideas. Thus, it’s not difficult to find bands singing about mental illness. Since its first days in the 1970s, Joey Ramone sang about electroconvulsive therapy in “Gimme Gimme Shock Treatment.” Keith Morris yelled about his brain needing some work on Black Flag’s “Fix Me.” But mental illness affects more people in punk than a person who writes lyrics for a band. Those who write comics or zines, put on shows, run record labels, and have their own punk podcast can all suffer from poor mental health. Schizophrenia or an eating disorder don’t care who you are.

Thus, when putting together ideas of whom to interview, I knew I wanted to get a wide range of ethnic, gender, sexual, and racial backgrounds. I also wanted people who are involved in the DIY scene in various ways. So, I interviewed people from all walks of the punk life: writer Jamie Rotante, musician and writer Jes Skolnik, zinester Jonas Cannon, musician Miguel Chen, and comic artist Haleigh Buck. Each of them brings their own stories with mental illness and all spoke with me about their history with their disease and how they’ve dealt with it.

Mental health is a complicated issue with many angles and opinions on it. Please don’t construe what is here as a suggestion on what you should do if you have a mental health issue. You are your own individual—what I and the various interviewees speak about are things that worked for us. Your experience doing the same things may vary.

At the end of the day, though, if there’s any message I want to get across, it’s that there is hope. As you’ll read in these interviews, not everyone has found the one answer about how best to deal with their depression, anxiety, or PTSD. But we’ve all found ways to continue living. I don’t think any of us would deny life is difficult—in fact it’s downright fucking horrible at times. And the bad times sometimes outweigh the good.

But there are people who care and people who love us, whether we believe it or not. There are people who would be sad if we weren’t around. But most importantly, our existence is good because we provide joy and happiness to others and to this world at large. I don’t want to extinguish that in myself, nor do I like to see it extinguished in anyone else.

I’m amazed the number of times I thought things were hopeless but after eating a meal or getting some sleep, I was able to turn things around. So if you’re reading this and feeling overwhelmed, I’d encourage you to go through the steps at this website: youfeellikeshit.com. And if nothing else, if you’re feeling depressed or suicidal and need someone to speak with, please call the National Suicide Prevention Lifeline: 1-800-273-8255.” —Kurt Morris

Haleigh Buck: Interview by Kurt Morris
“Haleigh Buck was born in New Jersey and has bounced around a lot (she lived out of her van for a while). She now proudly calls Baltimore home. Like many comic artists, she started drawing in elementary school. She did zines in middle and high school, and worked on comics in her early twenties, starting with an anthology of various short comics.

It wasn’t until 2011 she began to get serious about her work, creating entire comics with what she calls “legitimate plots.” Since then she’s created Cretin Comix, Herman the Hot Dog (“The dumbest thing I’ve ever done”), Cryptic Love, and an art zine called .003. She’s also been part of JT Yost’s anthology Bottoms Up, and Atomic Books’ Mutant Funnies. She regularly attends comic fests like Small Press Expo and has an adorable chocolate Lab named Frankenstein.

Haleigh and I spoke about the comic that brought her to my attention, I Feel Weird, in which she recounts experiences with her suicide attempts. We also spoke about finding reasons to live, therapists that lock you in their office in the dark (and ones who talk with you about tacos), the state of mental health care for lower-income Americans, and the stereotypes of women and mental illness.” –Kurt Morris

“Miguel Chen is known by many as the bassist for the Wyoming punk band, Teenage Bottlerocket. What is less known about him is his dedication to yoga and meditation. Miguel is a yoga teacher who also owns two studios in Cheyenne and Laramie called Blossom Yoga.

Recently, he wrote a book with Rod Meade Sperry called I Wanna Be Well. Miguel writes how he dealt with his depression and anxiety through meditation and yoga. The book also gives insight into lessons the reader can try if they want to find peace, as Miguel did. It’s a nice mix of self-help and memoir that’s a quick, fun read, which also manages to give the reader a lot to contemplate.

As Miguel writes about in the book, his sister and mother died while he was in his teens, leaving him with even more to overcome. Miguel and I spoke about the importance of his mom in his life, his experience with medication and therapy, the role of Latino culture in mental illness, and how yoga and meditation became salvation from his mental health issues.” –Kurt Morris

“Jonas Cannon has been making zines on and off for twenty-five years. Born in Chicago and raised in and around the city, he initially got into zines through friends in high school, but then took a break. In 2010, he visited Quimby’s Bookstore in Chicago and seeing all the zines re-ignited his interest in creating them. Since then, he’s published numerous zines including: Cheer the Eff Up, Fixer Eraser, Srviv (about everyone’s reasons for getting out of bed every morning, which he edited and contributed to), Pops (about radical parenting), and several one-shot zines.

Throughout his writing, Jonas’s zines take a perzine angle that not only explores his daily adventures but also considers issues such as masculinity, anxiety, and depression. This is often done with a mix of fiction, which isn’t surprising, given his love of the genre. In fact, in 2013 he published his debut novel, The Greatest Most Traveling Circus, with Sweet Candy Distro.

Jonas and I spoke about his experiences with bipolar disorder, how the zine community has supported him, the importance of zines in helping him with his mental health, and the added struggles the black community has in dealing with mental health.” –Kurt Morris

“Jes Skolnik was born and raised in Washington, D.C. and is a byproduct of hippie parents. Yet, Jes became firmly planted in the punk scene by their early teens. Since then, Jes has been involved in the scene in various aspects, launching the first of many zines at thirteen. Jes had a column in Maximum Rock’n’roll called Modernist Witch and has also written for Pitchfork, The New York Times, and currently serves as an editor for Bandcamp Daily.

Jes played in the bands Population and Split Feet after moving to Chicago in 2005 and is working to create an all-ages venue and community space in Chicago through their organization, Pure Joy Collective. In addition to establishing a venue, Pure Joy works with artists, musicians, and activists via events and educational programs.

Jes and I spoke about sexual assault and how it relates to PTSD and C-PTSD, realizing you don’t want to die, advocating for one’s self, and the relationship between mental illness and being intersex.” —Kurt Morris

“Jamie Rotante is a writer who was born and raised in Yonkers, N.Y. As a kid, she loved reading Archie. After graduating from SUNY Purchase in 2010, she landed a dream job with Archie Comics. She worked her way up from intern to writing a series called Vixens, which spans ten issues and places Betty and Veronica in an all-women biker gang. Jamie currently has other writing projects with Archie in the works, too.

Jamie has also written for Razorcake since 2014. She writes live music reviews and updated intros to interviews on the website. In 2017 she began writing a bi-monthly column for Razorcake titled “One Punk’s Look at Social Anxiety, Neuroticism, and Other Fun Stuff.” She says the most rewarding part of the column is when people who never talk about mental illness tell her, “Hey, I know exactly what you’re saying there.”

Jamie and I spent time chatting about her anxiety, her fear of going to therapy, the importance of a good cry, not wanting to appear weak as a woman with mental health issues, and the power of punk to build community.” –Kurt Morris

Donna Ramone doesn’t want you to put garlic in your vajayjay. (instagram)

Designated Dale is listening and talking.

We have two horns
We have one chance
Our clothes are ripped and torn
And on golden hooves we prance….”

This issue is dedicated to the memory of Aretha Franklin and the marriage of The Rhythm Chicken and Mrs. Hen.