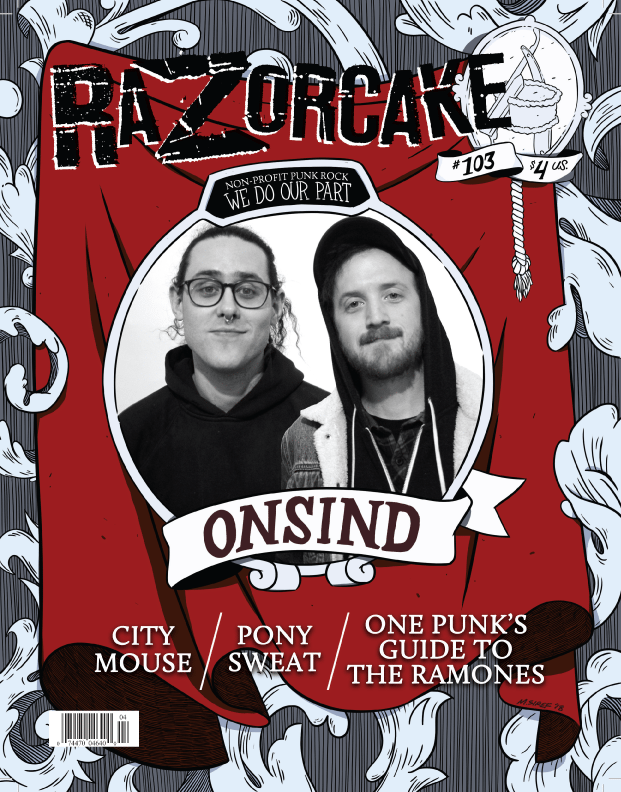 “Acoustic two-piece One Night Stand In North Dakota have been a fixture of the U.K.’s underground and DIY punk scene for over a decade. The band hails from Pity Me, a little ex-mining village in the Durham suburbs in the North East of England, with new album We Wilt, We Bloom issued by Specialist Subject in the U.K. and Salinas in the U.S.

They’ve played the “leftfield” stage at Glastonbury, hand-picked by Billy Bragg—and they kind of sound a bit like Billy Bragg—but with more hooks, more frantic guitar shred, and Pit Yakker accents. They used to share a label with AJJ, which is a good music launching point, too.

Both are members of Martha—the queer pop punk five-piece that also includes Nathan’s sister Naomi and former label buddy JC as songwriters. Where Martha are much better known, having sold out shows around the U.K. and been issued as a centerfold poster in U.K. rock mag Kerrang! ONSIND remain a smaller prospect; touring the U.K. with just two people and their guitars.

ONSIND have carried themes of social justice through several albums and EPs. The songs go straight for the throat in terms of vividly showing how illness or poverty can blight lives. Yet, lyrically the songs aren’t just about transmitting a sociology textbook to chords, or fitting a Jacobin article to a melody. The tunes are couched in stories of real experience. They are full of beautiful anecdotes and moments described with painter-eyed clarity: taking the belongings from a home of a person hospitalized with mental illness; listening to an old relative at a funeral hold forth on their political convictions; watching the leaves fall from a houseplant season to season and ruminating on mortality. ONSIND are brave enough to look at some of the darkest parts of modern life in the eye, but they’re also brave enough to make something beautiful, funny, and profound from those same dark parts.

I caught up with the band in Nathan’s offices where he works as an academic at Durham University. We talked about how a person can cope with the wilting and blooming periods of life and about how DIY has changed since ONSIND first picked up a pair of guitars.” –David Littlefair

“City Mouse made me fall in love with melodic, sing-along punk rock again. They reminded me that, even though I’m well into adulthood, I can still be struck by a song the same way I was when I was a teenager. I can still experience that sudden realization that I’m not alone in the world, that other people are feeling the way I’m feeling, and it’s fucking okay. This is a band that has been honing the art of soulful, heart-on-sleeves punk since 2001, just bouncing around the country from their current home base of Lansing, Michigan, playing shows everywhere, working their butts off and not making a big deal about it, even though that level of perseverance and commitment to making rad music seems like a big deal to me.

I asked City Mouse founder Miski Dee Rodriguez to pick me up at Chicago O’Hare after my flight back from Minneapolis. Not only did she agree, but she took me out to a fancy restaurant, where our meals were on the house thanks to the City Mouse fan running the kitchen. We ate by a big fireplace and talked about music and life.” –Emma Johnson

It’s a pretty universal thing to come home after an exceptionally shitty day at work, turn on your current favorite song, crank it up, and thrash and jump and punch the air until you’re breathless and suddenly much more calm. Now, there’s an aerobics class that basically takes this whole scenario and puts it into a one-hour session, and—bonus—plays some of the music you might already be using when you have that cathartic slam dance for one in your room.

Daryl and I sat down with Pony Sweat founder/instructor Emilia Richeson and instructor CJ Miller to talk about their particular brand of aerobics—a brand that reminds you to be weird and not get too caught up in doing all the moves correctly—and does it all to an eclectic soundtrack that incorporates a broad range of music including Bikini Kill, Prince, Princess Nokia, The Cure, Killing Joke, L7, Madonna, Vacation, and Peaches.

It should be noted that, somehow, these two balls of energy also find the time to make music. CJ plays in the pop punk band dimber, and Emilia is in the post-punk band Object As Subject. Emilia might be a familiar face to those who’ve seen Wreck Of The Zephyr’s video for “The Rolling Over Process” (she plays an out-of-control and ultimately murderous dog) and the Shark Toys video for “Something Something Else.”] —Bianca

One Punk’s Guide to the Ramones by Rev. Nørb

“One summer’s day finally flush with babysitting cash, I took my bike downtown, summoned up my nerve, and gamely tiptoed into the local head shop. Apart from a love of rock’n’roll, I was about as nerdy as it gets and had no interest whatsoever in bongs, clips, or rolling materials—but they had records in there, thus in I went. After a bit of nervous shopping, I made my selection: In my hands I clutched a shiny new copy of Ted Nugent’s Cat Scratch Fever album. I wasn’t that nuts about Ted, but the title track was kind of all right, and I really felt like buying a new album that day, so the Nuge it would be. As I headed towards the counter, some buried prehensile memory suggested I first check to see if the Ramones had any albums there.

And there it was, in all its black, white, and hot pink glory: Rocket to Russia, the album with “Do You Wanna Dance?” on it. In a grainy black-and-white cover photo, the band leaned against a brick wall in leather jackets, ripped jeans, and T-shirts. Sold.” — Rev. Nørb

Rev. Nørb studies the Descendents or the hero with a thousand farts. (website)

JV McDonough is playing Russian roulette with her immune system.

Rhythm Chicken celebrates his birthday with a special ‘Tute of ruckus chili. (facebook)

Designated Dale talks about Stryper and that’s all you really need to know (yellow and black attack!).


This issue is dedicated to the memories of Peter Eichhorn, Ursula K. Le Guin, and Mike Carroll.