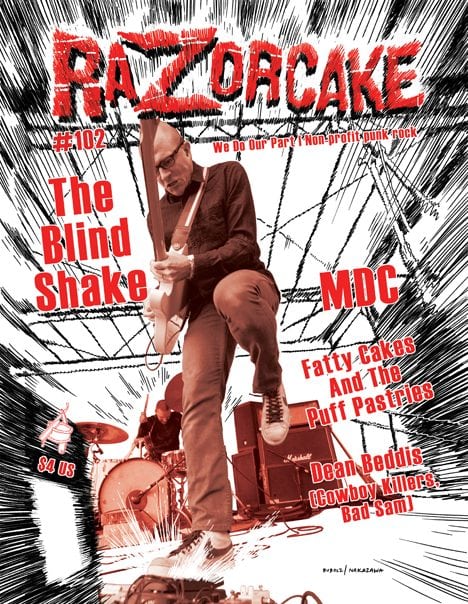 “Sixteen years. That’s how long The Blind Shake have been playing their distinctive style of surf-psych-garage-punk. Brothers Mike and Jim Blaha lead the Twin Cities trio. Together they create a sonic attack that’s both frenzied and melodic. The band has gained a loyal following through extensive touring. They continue to thrill audiences with their explosive live shows, which feel like a sweat-soaked rugby match on a galactic star cruiser. Their list of credits include six studio albums, several singles, two live albums, collaborations with psych rocker Michael Yonkers, and a surf record with John Reis. Their prolific output has now expanded to three recent side projects: Shadow In The Cracks, Jim And The French Vanilla, and BLAHA.

I sat down with the Blaha brothers in their rehearsal/recording space where they provided an insightful and philosophical perspective into their creative process. They talked about the band’s formation, their collaborations, side projects, life on the road, and the dangers of too much Red Bull.” –John Ensley

“Hardcore pioneers MDC, even after four decades, remain a go-to punk staple. This is perhaps truer than ever in the President Trump era. The band has navigated the genre’s ever-changing styles, remained focused on contemporary issues, and lived to see its slogan “No War/No KKK/No Fascist USA” (from their inaugural EP as the Stains) perfectly rebooted as “No Trump/No KKK/No Fascist USA.” They represent radical music as a form of endless conscience that never loses its edge.

Singer Dave Dictor discovered punk’s anger mismanagement, irreverent style, sexual mix-ups, and fiery political intrigues in Austin during the waning years of President Carter and has become a totem of the movement by figuratively and physically trying to battle right-wing sentiments, animal torture and cruelty, sexist systems, violence against indigenous communities, and much more.

His occasional cross-dressing and showbiz goofiness, like donning Elvis attire during an entire tour, have been part of the nuanced jigsaw puzzle that is his identity. And his wide-ranging lyrics, with biting humor fueled by passion, have mesmerized legions globally. In the mean time, the band’s music—a motley hybrid of pure hardcore wrestling with bits of metal, country roots, classic rock, rap, and now even opera—have remained vitalized by a changing lineup.

The band tours incessantly. They recently purveyed both the punk scenes in Europe and Asia, where Dave photographed the sights and people for an ongoing online diary that sheds light on him: from his interests in elephants and architecture to food and customs. He has become a punk ambassador of the permanent party of dissension and the seasoned, open-minded leader of the underground network where animal liberators and Antifa agitators convene. But he is also a spiritual entity, seeking to find solutions in kindness, not just in polemics.” —Dave Ensminger

Fatty Cakes And The Puff Pastries: Interview by Candace Hansen

“Remember the beginning of the Ninja Turtles cartoon when there was a radioactive slime that turned ordinary turtle babies into intelligent, pizza-eating, high-flying friends on a quest for justice?

I imagine Fatty Cakes And The Puff Pastries origin could have easily involved mermaid chic primordial ooze dropped onto the Puff Pastry Babies in the Fresno Fashion Fair Mall parking lot by The B-52’s. They’re left to be raised by Virgie Tovar or Missy Elliott instead of Splinter, on a steady diet of cake, riot grrrl records, and stardust. Their music is their weapon. Toy organs, glockenspiels, and razor-sharp wit are deployed alongside tales of survival set to the only rhythm section I’ve ever witnessed that can pull off transitions between Aaliyah and hardcore without a hitch.

Fatty Cakes And The Puff Pastries are a group of best friends not afraid to throw a Nazi into a Stone Cold Stunner while applying glitter lip gloss and eating a cupcake at the same time.

I caught up with the band when they stopped in at my place in Huntington Beach. They came late, dressed in berets and fall sweaters, filling out my Halloween-clad kitchen table. There were laughs and some nerves after laying the final tracks of their full-length, self-titled album just an hour before with Alice Bag at Station House Studios in Echo Park. Before we started our interview, conversation of bad piercings, Ashton Kutcher and the trucker hats that defined a generation, stealing cable TV, and home-taped VHS tapes of Elvira and Driving Miss Daisy flowed between recollections of their songs—hybrid diary entries and rage-filled manifestos for listeners. It’s all so effortlessly cool, relatable, and unique.

Don’t let anyone tell you nothing good is coming out of the central valley because it just isn’t true. Fatty Cakes And The Puff Pastries will travel, but are not leaving home, and for them—and so many of us—that is a political act of resistance.” —Candace Hansen

“Dean Beddis has been a familiar and charismatic part of the DIY punk scene in the U.K. since the early ‘80s. From the Cowboy Killers to his current band Bad Sam, he has annihilated stages across the country for decades. I grew up in the arse end of England and finding out about underground punk was like doing a Rubik’s Cube in the dark.
In 1986, I came across a copy of MRR and started writing to bands all over the world. One of the first people I wrote as a spotty, awkward fourteen-year-old was Beddis. He always found time to write, do mix tapes of obscure USA bands, and send shirts and records.

He called my Mum and Dad and invited me to visit Wales that summer. I started visiting him every school holiday, for years. He would take care of me, take me to gigs, put my friends up, and buy me food and drink. He helped me get away from my shit life, always telling me I’d be okay. Thirty-one years on, we are still the best of friends and he is still like a big brother to me. His life has been a roller coaster, but he has always been there for friends and family. I’m glad to be part of telling his story.

Over the magic of Skype, I sat down with Beddis for three hours. We covered everything from his early days growing up in the Welsh valleys, right up to him being fifty-two with six kids. What follows is an edited version of our lengthy conversation.” —Tim Brooks


Donna Ramone is pen pals with the abyss. (Instagram)

Ben Snakepit enters the Kobayashi Maru of trying to get along with all Star Tek fans. LLAP. (website)

Art Fuentes knows that world peace can last as long as it takes to eat a burrito. (twitter)

Jennifer Whiteford is parenting in the Upside Down.

MariNaomi understands that no good can come from asking, “Where are you from?” (website)

Lucky Nakazawa runs out of air and hope. (website)

Designated Dale wonders when was the last time you used a Thomas Guide?

This issue is dedicated to the memory Charles “Ed” Clarke.