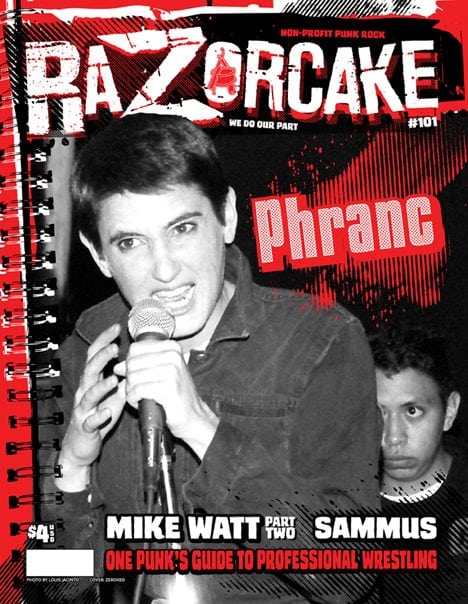 “Phranc, an out lesbian since the mid-‘70s, is a first wave L.A. punker. She’s been here since nearly the beginning and was in the epicenter of amazing music. She showed up and looked cool, which led to her playing in three bands: the marvelous, electro-caustic, and boundary- ignoring Nervous Gender; the wry, biting Catholic Discipline, featuring Slash editor Claude Bessy, Craig Lee of The Bags, and Robert Lopez of the Zeros; and the all-female, tough-as-hell, dagger-through-the-heart proto goth punk band Castration Squad. She’s also on film in Decline of Western Civilization.

Phranc, as a punk, went folk in the early ’80s. Her solo debut, Folksinger was released in 1985, and featured “Take off Your Swastika.” She toured the world both as The Smiths’ and Morrissey’s opening act and recorded five solo full lengths.

That’s her music bio, but that’s only part of her story. Phranc’s life involves a stint as a lesbian separatist, drug addiction, a painfully close death, and a horrific dog bite. It’s also a journey that includes surfing, lifeguarding, competitive badminton, selling the shit out of Tupperware, an ambition to being a cake decorator, and being a renowned visual artist working in cardboard while bagging groceries at Ralphs.

Far from bitter and cynical at sixty, she’s a living, breathing, humane reminder of what a broad span of creativity can look like. She is also really fucking nice. To be able to sit down with her and Alice Bag to get a more detailed picture of her life so far, was an extreme pleasure.” –Todd Taylor

“Creativity mixed with ethics is the portal to a parallel universe.
Welcome to Part II of the interview with Mike Watt, widely known as one of the best bassists in punk rock of any era and a founding member of The Minutemen and fIREHOSE. He is a foundational and continuing pillar in Los Angeles punk rock. (San Pedro is located in the City of Los Angeles.)

In Part I of this interview Watt covered—among a host of other topics—the power of zines, his friendship with D. Boon, the almost absolute worst case scenario for an ingrown hair from a bike seat, his 125 months in The Stooges, the death of bumper stickers, Dadaism, punk as a movement, the mental gulags that genres often create, the Ramones, Bags, and Screamers, and the magnetism of San Pedro, Calif.

In Part II, Mike Faloon and I hold on as Watt captains the ship over a vast map of largely unchartered territory. Topics include some of the following...

How the Minutemen briefly flirted with art rock (involving grease and their newly shaved heads). A note left on a napkin to Mike Watt from John Fogerty of Creedence Clearwater Revival in the wake of D. Boon’s death. The waters of Watt being on a major label for fourteen years while keeping his autonomy and integrity. Clenchedwrench Records. Converting the power from the Jackass franchise with the Minutemen song “Corona” into money for D. Boon’s family well after D. Boon’s death. And why Sammy Hagar can still go fuck himself.

Sit back, read on, pull out a mirror, and contemplate the abyss.” –Todd Taylor

“Rapper, producer, and doctoral candidate at Cornell University, Enongo Lumumba-Kasongo, known as Sammus, obliterates every box she is placed in. A native of Ithaca, N.Y., Sammus defies labels and transcends genres for her daring lyrics—at once personal and political—cut to the bone to expose the marrow. Although she filters her words through a geeky perspective (her namesake is derived from an iconic Nintendo heroine, and she brandishes a replica of the character’s arm cannon on stage), Sammus’s lyrics remain potent and undiluted.

A few days after the interview, I saw her perform in Los Angeles at Junior High, a non-profit art space. Without a stage, supported only by her thumping beats, Sammus rapped fearlessly (and at one point, tearfully), becoming a force to be recognized. Her lyrics, although reflective of her own experiences, penetrated the soul of everyone who has felt left out, unrepresented, and marginalized. By deep diving into her personal life, she surfaces relatable themes buoyed by heartfelt emotions.

Unlike her videogame namesake, Sammus refuses to wear protective armor; she does not hide her true self because her vulnerability and honesty are the source of her power, charging her arm cannon aimed squarely at all the negative bullshit in the world.” –Sean Arenas

One Punk’s Guide to Professional Wrestling by James Rosario

“I’ve been watching and following professional wrestling for as long as I can remember.

I grew up watching WWF (World Wrestling Federation) Saturday mornings in my hometown of Moorhead, Minn. I loved—and hated—all the late ’80s stars like Randy Savage, Ultimate Warrior, Andre The Giant, Mr. Perfect, Ted DiBiase, Bobby Heenan, Roddy Piper, and of course, Hulk Hogan. I had no idea then, at age nine or so, that I was living in a state steeped in wrestling history. I wasn’t even aware that there were other wrestling companies out there fighting for my viewership, and that it was a cutthroat business with a ma a- like history of backstabbing, double-crosses, and betrayals. While I was watching Hulk Hogan beat up every bad guy who came his way, I had no clue that just a few years before, he had been lured away from the AWA (American Wrestling Association)—a longstanding and successful wrestling promotion based in my home state—to the WWF, their New York rivals. Hogan’s jump from Minnesota to New York was devastating. It ultimately put the AWA out of business. These kinds of stories were absolutely fascinating to me. As I got older and started to read books on the subject, I was so excited to learn of the history that happened right in my backyard and beyond. Once the internet became available and the information started to flow, I had a field day.” –James Rosario

Art Fuentes does the Sunday kickoff for ‘Merica. (twitter)

Bianca reflects on the transformative power of burrito alms.

“Catch me in your history books real soon
Because I am documented
I am here.”
–Brenzy Solorzano (ig: @lucysfuur)

Rhythm Chicken appreciates that the infectious chaos rhythms of his poultry pummeling can cause fright and concern. (facebook)

Jim Kettner is waiting for that adult crash. (website)

Designated Dale knows his product and his monsters.


This issue is dedicated to the memories of Grant Hart, Victoria Scalisi, and Fats Domino