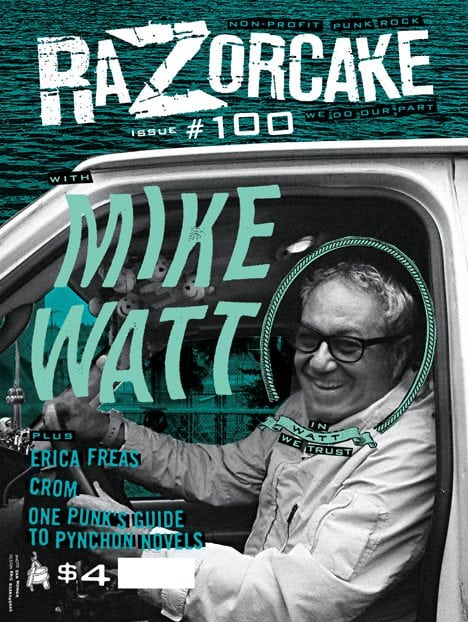 “It’s a bit dumb that Razorcake’s never interviewed Mike Watt.”
“Wait. Mike Watt’s never been interviewed in Razorcake?”
“No. Weird, right? We’ve covered plenty of Pedro bands.”
“Never? That can’t be right.”
“Several people offered, but it never panned out. He even played a show for us at Pehrspace.”

I know it’s just a number, but the hundredth issue has some numerical heft to it. For a zine, it’s a survival number. There’s only a handful of zines in the history of publishing that have ever made it this far.

I wanted to interview another punk milestone, to add personal meaning to a momentous occasion.

Mike Watt was the bassist of the almost immeasurably influential Minutemen, a band he started with his best friend, D. Boon. After the tragic death of D. Boon in an automobile accident, Mike continued on with fIREHOSE. Following a brush with death from an ingrown hair on his perineum, Mike tripled down. He put music out under his name (“so you know who to blame”) and has created three operas. He plays with an incredible, shifting array of other musicians (from jazz legends to The Stooges). He collaborates worldwide with people he’s never seen face-to-face.

The day of the interview, Watt rolled in like a fog—knees stiff, his boat safely moored at the bottom of the street.

Mike Faloon and I had prepared five pages of questions. Watt started talking well before we started recording, as we walked back to the studio. I knew Watt was a talker who had his own lexicon, but ten, fifteen minutes in, we hadn’t asked him a single question. He had his spiel. He’d come prepared.

After I asked my first prepared question, I wasn’t sure he’d heard it. It seemed like he headed off in a completely different direction. Minutes later, it dawned on me that Watt wasn’t fishing with a single line. He casted wide nets: nets of deep musical history, nets of interpersonal relationships, nets of associative memories, observations, and ethics.
An hour later, Watt pulled in the first net. All of these seemingly unconnected things that had been swimming in a vast sea of knowledge were cinched up and floomped on a scale for Faloon and me to understand the weight of.

It was masterful. Linear thought is for squarejohns. Much respect to Watt. Welcome to Part I, the end of a century. –Todd Taylor

“Erica Freas (she/her) fucking gets it. She knows when it’s time to stand up and fight head on, and when it’s time to step back and come in service to others. Playing solo, as well as in bands— RVIVR, SOMNIA, and Hot Tears—Erica has been and continues to be at the forefront of an ever- changing punk scene. Working to cultivate safer spaces at shows, bringing more representation of women and queers to punk, all the while making amazing music, Erica Freas is a seasoned yet refreshing voice. And she’s fucking smart.
At thirty-five, self-proclaimed as “straddling” between older and younger generations, Erica has cultivated a deep compassion and a strong ability to see people where they’re at, and attempt to meet them there. She’s holistic, she’s realistic, and she’s self aware. She’s not in it for ego, for status. She’s in it to do her part.

Through her music, her performance, and her overall being, Erica stands her ground. She knows what she can do, and she does it. Well.

Barring jokes about young people and their phones, I met Erica by sending her a text
and a selfie. Her impeccable sense of humor, spot-on observations, and her ability to see
the complexities at play within art and culture became apparent within seconds of talking. Erica has great ideas and she expresses them without pretension. She speaks up and speaks her mind, but more importantly, she listens. Learning from others around her, using her platform to create dialogue, tirelessly contributing to making punk a more inclusive and celebratory community—the space Erica Freas makes is where punk should be going.

We sat down—she in her home of Olympia, and me in Chico, Calif.—to talk Mariah Carey, internalized misogyny, wigs, and social justice in punk.” –Griffin Wynne

“For the past twenty-five years, Crom have been a barbarian fist in the face of the music industry. The band, which shares their name with the fictional god in Robert E. Howard’s Conan stories, devastates its listeners with sheer sonic, barbaric brutality. Crom have become a legendary name in the Los Angeles powerviolence scene over the years. Whether they are bumming out Beck fans as his opening act or attempting to eat their guitar cables, Crom are a musical force to be reckoned with.

The band’s sound is an intense amalgamation of ‘90s-era powerviolence (blisteringly short and fast songs full of blast beats and vocal cord-shredding screams) fused with heavy thrash riffs that lay waste to listener’s eardrums. This, combined with tons of audio samples and a running undercurrent of self-deprecating humor, makes the band easily enjoyable for fans of heavy music (at least those who don’t take themselves too seriously).

Crom shows are often violent, alcohol- and drug-fueled gatherings of chaos that leave audience members beaten, bloody, and begging for more. But Crom’s history as a band has been just as chaotic as their shows. Numerous lineup changes, touring issues, and a general affinity for substance abuse have hindered the band’s success. But with die-hard fans who stick around like S.T.D.s and the musical chops to create genuinely good heavy music, Crom battles on.

On a sunny Saturday afternoon, I made my way down a quiet residential street in El Sereno, Calif., towards Crom guitarist Phil Vera’s house to interview the band. The atmosphere of the calm neighborhood [was a stark contrast from the city-leveling assault Crom’s sound inflicts on its listeners. Armed with a sixer of Mickey’s fine malt liquor and a notebook, I trudged up the driveway. I was filled with apprehension as I stood outside the door. Would I be smashed under the weight of a Cimmerian Warhammer? Or perhaps cleaved in twain by a longsword? Quite the opposite.

I was met by Phil’s mother who was on her way out after a visit and was greeted warmly by a limping Phil who had recently sustained a knee injury. We made our way inside where we met guitarist Scott Bag who was quietly sitting on a couch strumming an acoustic guitar. Cracking open a few beers, we made our way out to the well-manicured backyard where we were joined by bassist

One Punk’s Guide to Pynchon Novels by Sean Carswell

“I stole my first copy of a Thomas Pynchon novel. I was at a flea market in the student union of Florida State University, the summer of 1991. I saw a battered copy of The Crying of Lot 49. The front cover would need tape to survive another reading. The margins were littered with the type of comments an undergrad writes while taking notes in class, wondering if this shit will be on the test. The price: 45¢. I read the first line of the book at the stand:

One summer afternoon Mrs. Oedipa Maas came home from a Tupperware party whose hostess had put perhaps too much kirsch in the fondue to find that she, Oedipa, had been named executor, or she supposed executrix, of the estate of one Pierce Inverarity, a California real estate mogul who had once lost two million dollars in his spare time but still had assets numerous and tangled enough to make the job of sorting it all out more than honorary.

What? Kirsch in the fondue? Housewives getting drunk off spiked cheese? Correcting executor to executrix? Is executrix a real word? (It is). A novel about divvying up assets with this much energy and madness in a sentence? I was sold. Only, this was a time in my life when 45¢ was a little more change than I could spare. I intended to put the book back and check it out from the library, which was on the way home anyway. The guy who ran the book stand said something smart ass to me. I nodded, put the book down, and flipped through another box until he turned his head. I slid the book into the pocket of my plaid bermudas and headed home.” –Sean Carswell

Donna Ramone welcomes you to the Gross Palace. (Instagram)

Ben Snakepit does numerology in celebration of issue 100. (website)

Designated Dale reflects on the nexus of Razorcake relations.

Violeta is a ten-year-old, L.A.-based poet who writes poems interweaved with Spanish. She is the daughter of an undocumented father who was picked up by ICE one morning on her way to school (the first day of fourth grade, just days after her ninth birthday.) Violeta has a story to share and it is the voice of today’s ten-year-old youth scared about the uncertainty of their world. Follow her journey @lapoetavioleta.


This issue is dedicated to Namella J. Kim.