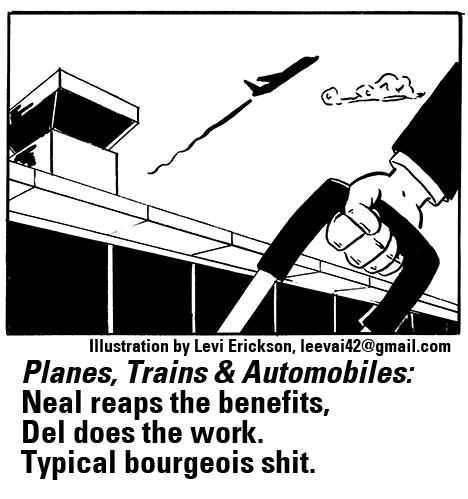 One Punk Goes to the Movies: Planes, Trains & Automobiles By James Rosario

One Punk Goes to the Movies – Planes, Trains & Automobiles
Doom and Optimism at its Finest

The holiday season means a lot of things to a lot of people. I used to pretend that I didn’t care about it, that it was all stupid consumerist bullshit. Truth is, I’ve always enjoyed the holidays, even back when I was a young shithead punk. Now that I have kids, I enjoy it even more. I get a kick out of it, what can I say? The food, the family, the day drinking, and lord help me, even the music (it’s the kids, I swear!).

And naturally, there’s the movies. It’s no secret there are a multitude of very shitty holiday movies out there—I mean a lot, and I mean really shitty. But, if you can weed through the sappy and uninspired crap, there’s a few good ones out there too. For me, watching the handful of non-vomit-inducing holiday classics is a tradition that I very much look forward to, and every year, we kick off the season with John Hughes’s 1987 road disaster, Planes, Trains & Automobiles.

I was ten the first time I saw Planes, Trains & Automobiles, shortly after its release. I thought it was hilarious, of course, but as the years passed, it started to take on new meanings for me. In fact, with each subsequent viewing its complexities were revealed to me more and more. I found myself getting something new from it every time I watched it. At first, I just laughed at the jokes (who could forget “Those aren’t pillows!” and the cuss-filled car rental rant), but eventually I became more clued in to and more interested in how its protagonists, Neal and Del, interact with each other, and what their personalities could tell us. It’s a deceptively layered and nuanced film, with performances that are emotional, touching, and real—all while being one hundred percent comedic gold. It’s also punk as fuck. Let me explain…

On its surface, the story is simple. Neal (Steve Martin) is in a hurry to get home to Chicago in time for Thanksgiving. He’s traveling from New York and his luck runs out almost before he even leaves work. He runs into Del (John Candy), who inadvertently steals his cab. They wind up on the same flight (which ends up getting delayed due to a blizzard in Chicago), and thus begins their doomed journey to the Windy City—a journey where bad luck turns to worse luck, and where two very different people manage to find common ground through a lot of wacky adversity.

Neither Neal or Del are bad people, and which one you identify with more could potentially tell a lot about your personality. Neal is a well-to-do advertising executive with the “perfect” family, career, and house in the suburbs. Del, on the other hand is a “go with the flow” traveling salesman who means well but doesn’t realize that he can be a bit overbearing. Del has a desire to help and to make friends while Neal is cynical and wants to be left alone. To put it simply, Neal is a bit bourgeois while Del is more proletariat.

It’s in this distinction that the punk aspect comes into play. Del sees a problem (we need to get to Chicago, for example) and, without question, offers to help in any way that he can. Punks do this all the time, whether it be booking shows for bands you’ve never heard of, contributing to zines, organizing workshops or food drives, or any other number of things of which the goals are meant to help others in some way. Del sees cooperation as the key to success. Neal on the other hand thinks that throwing money and influence at the problem is the answer. Typical Baby Boomer bullshit. He quickly realizes, however, that once out of his corporate and suburban comfort zone, his solutions don’t hold water. He needs help, which he reluctantly agrees to, but still scoffs at.

Time and time again Neal seems angry that he needs the help of a person such as Del. He can’t quite understand why his way of doing things isn’t working for him. It’s as if he’s a stranger in a foreign land—but this foreign land is simply middle America, and the strange people he’s meeting are nothing more than average Americans. He’s lived in a castle, and now he’s down in the fields. If it weren’t for the kindness of Del, Neal may still be stuck in that airport in Kansas City.

Del treats people with respect, and is in turn treated with respect back (by everyone except Neal, of course). Neal goes on tirades to service industry folk and gets fucked, as they say. The lesson is clear, and it’s one that all of us punks have known for most of our lives. We most likely wouldn’t be here if we didn’t.

It’s easy to be a cynic in hopeless situations. We’ve all been there, and no doubt we’ll be there again. But, in true punk rock fashion, Del doesn’t let this stop him, and what’s interesting about Del’s particular brand of optimism is that it’s grounded in reality. His head is not in the clouds; his feet are on the ground. He knows what the situation is, he knows it’s fucked up, but he soldiers on anyway. I’m sure many of us can relate to the doomed road trip these two are on (I myself have been on many), so we know that giving up isn’t really an option. You have to keep going. What’s the alternative? Neal doesn’t understand this. He wants to get home, but he’s unwilling to take the necessary steps to get there. Del, on the other hand, offers solution after solution. Sure, most of them backfire, but at least he’s trying. Del is as DIY as they come. Neal reaps the benefits, Del does the work. Typical bourgeois shit.

I’m coming down pretty hard on Neal, but he’s not trying to be a dick, he just doesn’t understand how the real world works. He’s like our parents trying to figure out how the hell they ended up with punk kids. It’s hard not to be cynical in the seemingly unwinnable situation he’s found himself in. He doesn’t realize it until the end of the film, but it’s Del’s near unwavering optimism that saves his ass, and when he does finally come to that conclusion, he does what’s right, and is redeemed (take note American voters).

John Hughes is most famous for teen comedy/dramas like Sixteen Candles (1984) and The Breakfast Club (1985), but Planes, Trains & Automobiles is his most accomplished, and his most punk work. The characters are not clichéd “types” that we’re given in his other outings. And while his other films may touch on teen angst and other themes relatable to punks, they fall short of the humanity of what we hold so dear. Neal and Del are real, and their plight is relatable to ten-year-old kids and forty-year-old punks at the same time.

In a very touching scene near the beginning of the film, Neal chastises Del for his grooming, sleeping, and conversational habits. It’s a biting barrage of insults that takes place in the hotel room that Del procured for him so that he wouldn’t have to sleep in the airport. It clearly hurts his feelings, but Del stands his ground. He tells Neal that there’s nothing wrong with him, that people like him. He isn’t afraid of what people think of him, and he’s proud of who he is. It’s not that Del “doesn’t give a fuck,” it’s that he most certainly does, and he’s hurt because Neal can’t see that. The delivery of this scene is the best Hughes has ever directed, and it’s a moment that, as punks, we’ve all been through on some level.

A lot of morals could be taken from Planes, Trains & Automobiles. They’re all very human morals (respect for others, gratitude, cooperation, et cetera) but one thing I’ve always loved about punk is its humanity. John Hughes is not a punk, but he made a punk movie that reinforces the beliefs that many of us hold dear. If only the rest of the world could actively embrace these beliefs too, we’d be all right. It’s also a really, really funny movie.

James Rosario is a film critic living in Asheville, NC. He loves punk rock and movies, and especially when the two collide. He can be reached via his blog, thedailyorca.com