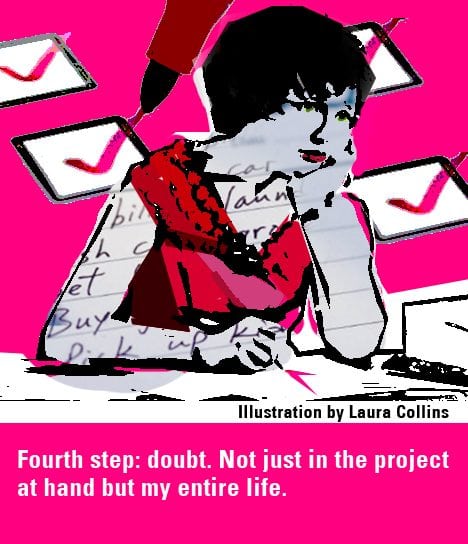 As I’m writing this, the audible ticking of the wall clock behind me is damn near deafening. It sounds like a drum march blasting in my ears. It’s not really that the clock is loud, but the mental tick-tick-ticking is inching closer and closer to the big boom.

Yeah, I guess you could say I’ve been procrastinating again.

I’m counting down the days and hours until my deadline. Sure, I’ve had a solid month and a half to work on it, but it’s come down to these last few crucial hours… the same as it always does. I like to trick myself into believing that it’s because I work best under pressure. The reality is that every deadline is accompanied by a series of mental Olympics that can last anywhere from a few days to a few months. Freelance projects for me are akin to the five stages of death—except crank that number closer to ten and have them be way more manic.

Second step is avoidance. I know I don’t have to work on said project until a certain date, so there’s no point in wasting energy on getting it done early when I could be working on something more pressing (i.e., a different project I’ve been procrastinating on that needs more immediate attention).

The third step is panic. Wait—fuck—what was that deadline again? Have I blown it all? Am I the most unreliable freelancer in the world? This is usually followed by a realization that I still have ample amount of time to get the job done.

Fourth step: doubt. Not just in the project at hand but my entire life. Does anyone care what I have to say? Is my writing really worth anything at all? Why do I even bother?

Sixth step. Denial. There’s no way the deadline is already in a few days.

Seventh step: acceptance. It’s time to hunker down and get it done. Of course, this last step only comes after days of opening my laptop and silently screaming before deciding to play mindless games on my phone, wrap myself in a blanket, curl myself into a ball, and fall into a slumber so I can hate myself in the morning when I realize how non-productive I’ve been.

Then I finally write my damn piece.

And so it goes for literally every project I embark on, from school projects of yesteryear to writing gigs of the present. It’s like my mind just refuses to let me get a head start. I think about it. I entertain the notion of getting ahead and doing things in a timely fashion, but then my mind and body will just not let me. I take note of my deadlines. I mark them down in my planner. I create alerts in my phone. I make myself aware of how long I have. I take all of the responsible steps I can before being decidedly irresponsible.

Don’t get me wrong—I always hit my deadlines. I have to. I’m so hyper-aware of them it would be straight up negligence on my part not to. But I just never feel inspired until the days and hours before the deadline are official. Every time I’m given a new task, I want to get it done early. I want to get ahead of the game and make an editor’s life easier, especially being one myself. But the little part of my brain that likes to go swing dancing with paranoia and anxiety refuses to allow that to happen, so I can only truly function at the last possible minute (sorry, Todd!). That’s the only time my brain will allow me to actually gather my thoughts in cohesive way.

It’s worse with personal projects. Deadlines actually help; sure my brain may go into overdrive and I may panic for weeks on end about that “time’s up” moment, but at least they actually give me a direct path towards creativity. So often while I’m at work or handling mundane tasks, I think of my best ideas for stories and new creative ventures—always when I don’t have the time to harness them and bring them to fruition.

Then when I have a few moments to myself to start cracking down and making my ideas a reality, I go blank. I can’t concentrate, I can’t bring pen to paper. There’s no timer going off pushing me to do it, so it never gets done. I have notebooks upon notebooks of half-finished scripts and ideas. Documents upon documents of short stories I started with the intent of entering into writing contests, but never finished. If there’s no real threat of someone being angry or upset with me for not getting it done, it’s impossible to do. I’m always angry and upset with myself, so that doesn’t work. I spend more time chastising myself for the work I’m not doing in the time I could be doing it that self-loathing is no longer a motivating factor, just an ordinary occurrence.

It’s also not just about writing or freelancing. It’s procrastinating in life. “Why put off till tomorrow what you can do today?” is a really nice sentiment I reject as often as I think about it. Laundry goes unfolded, dishes pile up, my car’s oil goes unchanged until I explode into a mess of frustration. Text messages go unanswered. That’s probably the worst offense I’m guilty of. Text and other kinds of digital messages, things that should bring forth happiness and excitement, instead awaken a dread within. What does this person want? Why are they texting this early? Oh God what if they want to… hang out??? I read the message and wait to reply. And then I read it again and wait some more. I read and read and hope they don’t see that I’ve read their message while I continue to put off my reply. Then I genuinely forget I was waiting to respond. Then I hate myself for being a bad friend.

Why didn’t I just respond earlier? Well, why do today what you can put off till tomorrow? Why do anything in a timely fashion when it’s so much more fun to procrastinate and agonize? Why would my brain want completion and complacency?

Then there’s the last, final stage: achievement. Once I’ve finished my writing, dried off the last dish, put away the last book on the bookshelf, or finally shot off that text or email, the feeling is so good, so pure—the closest to true bliss I’ll ever get. In fact, I’m inching closer to it now with every word I type. Maybe that’s what this is all about. The procrastination and the panic it breeds wouldn’t make that actual act of completion so damn fulfilling if I just got things done like a normal person. The rush of creativity and satisfaction in what I’m producing wouldn’t taste nearly as sweet if it came to me in a timely manner. It’s the mental hell I have to put myself through to achieve nirvana when I come out the other side. It’s not about just being lazy or irresponsible; it’s the journey, the struggle and the triumphs.

Nah, I’m pretty sure I’m just an asshole. But hey, that felt nice for a while. Now, time to cross this one off my deadline list and hibernate until the day my next project is due!