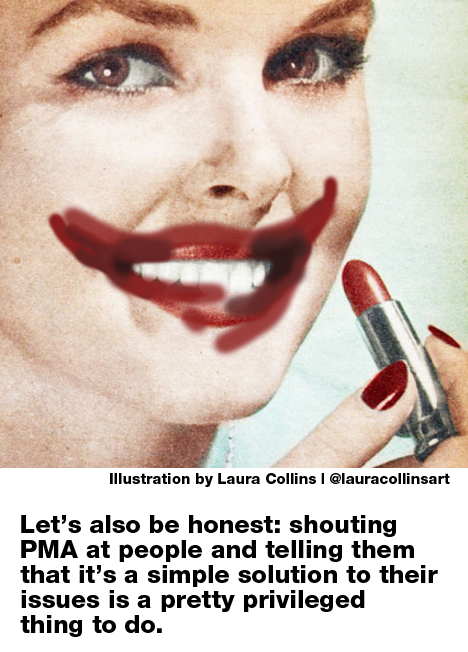 PMA. Maybe you’ve heard it shouted on stage by a muscle-bound lead singer of a New York Hardcore band. Maybe you’ve seen it sloppily graffitied on a street corner—it’s three letters that pack a punch, and the command is simple: Positive Mental Attitude. In short, it means that even when the chips are down, you focus your mind on persevering. Get your head right and your life will follow. Think positive and good things will happen.

But goddamn if it’s not easier said than done.

A bit of history: the concept of PMA came about in 1937 by self-help author Napoleon Hill in the book Think and Grow Rich. While never actually using the term “PMA,” the book does develop the importance of positive thinking in relation to wealth and success. It’s the philosophy that having an optimistic disposition in every situation in life attracts positive changes and increases achievement. It’s also become the premise for pretty much every self-help book that’s come out since, using the notion that having a simple set of principles—if implemented correctly and with enough persistence—will guarantee success regardless of the person’s background or social status.

But is it really as easy as all that?

For me, that’s a big fat no. And I’m sure there’s no surprise in me stating that—I’ve already divulged in-depth my own issues with negative thinking. I’ve even touched upon the notion that PMA seems to be the obvious answer to countering my intrusive bad thoughts. If I just try envisioning the good and embracing the positive outcomes, won’t that keep my negative thoughts at bay? Or, at very least, strike enough of a balance between the two? The truth is I attempt this at least once a day. I spend a lot of my time daydreaming about the future—imagining myself in better scenarios and with an abundance of happiness. I hope for positive outcomes for those around me, too—envisioning my friends and family living their #bestlives. I commit to the dreams and hope that they’ll transcend reality and manifest themselves as truths, even while my brain tries to poke holes in that imaginary happiness with nugget-sized craters of fatalistic reality visions.

But envisioning those positive scenarios actually does help. Not by some magical force or by crude mentalist tricks, but by attracting positive people and happiness and deflecting anyone who wants to impede on that (even if I do spend a lot of time agonizing over those who try to actively stomp on my happiness). I do believe that spending a lot of time being outwardly miserable will only bring forth more misery. I do think that putting on a happy face and trucking on even when things are rough helps to bring on good tidings and better outcomes.

That being said, countering all the bad shit in the world takes a hell of a lot more than just thinking about it all going away.

Let’s also be honest: shouting PMA at people and telling them that it’s a simple solution to their issues is a pretty privileged thing to do. It’s not fair to assume that the answer to everyone’s problems is to just imagine themselves being better and then they’ll be better. That mindset is just laced with victim blaming. Sorry, Napoleon Hill, but having a good mindset might not be the key to wealth and success in spite of your societal standpoint. Sometimes your social class does define you and it takes way more than just invoking the positive to change that. There’s often an element to the PMA movement that implies that we’re all starting from a level playing field, which is just way off base, both in terms of physical and mental attributes.

And on a personal level, I also think that pushing forward even when times are tough and deflecting the bad to think about the good can be agonizing. Sometimes an uphill battle can go even slower when you feel like you’re suffering in silence. The last thing you need is someone to tell you to just change your mindset the moment you open up about your problems, as if the answer is an easy one you’ve been ignoring all along.

That’s not to say that I think PMA is disposable or a bad motto to follow—there are quite a lot of good aspects of it that I sincerely try to implement in my daily life. A big part of having a positive outlook is putting effort into leading a meaningful or purposeful life, especially in which one works toward a higher cause. Many modern theories of self-esteem explore discovering value within ourselves. We can discover this personal value by using our unique strengths to contribute to the happiness of not only ourselves, but to others as well. It’s about focusing on the positive as a means to acquire the skills to be able to deal with the harder times of life in fuller, deeper ways—both for ourselves and our communities.

PMA, even in the hardcore sense, is often heavily rooted in civic activism. When active, rebellious positivity is used to counteract injustice, that’s an excellent deployment of PMA. And when you can combine PMA with an awareness of your own privilege and use it to help others, that’s the best possible combination.
In the end that’s my biggest motivation for staying positive and forging forward; if I can help myself, I can help those around me—especially those who don’t have the same privileges I have. It’s the awareness that we’re not all born of the same class with comparable backgrounds and upbringings. It’s the awareness that not everyone can just think positive and change their statuses in life—but that those who have even the slightest more access to the tools to create change can use that PMA to help others. And using a positive mental attitude to create positive change is a damn good feeling.

As redundant as it may sound, being positive is key to being happy—but only if we’re not forcing ourselves to be positive, instead choosing to live that PMA and share that positivity with the world around us.