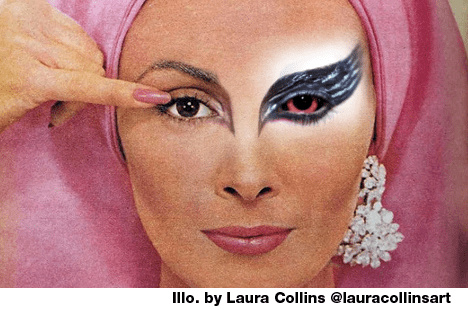 Practically Imperfect in Every Way by Jamie L. Rotante

Confidence is an elusive mistress. She courts me with her feminine wiles, her perfectly catted eyes that hide behind heart-shaped sunglasses and full, redder-than-red lips. She wears her dark hair in victory rolls that sit high atop her head as she lifts her chin up and walks through doors with assuredness that makes men cringe.

She is me in my fantasies.

In reality, my eyeliner looks like I’m a Black Swan reject and my lips are forever feathering, as I burn my fingers on my curling iron while my “rolls” split and fall. I’ve misplaced my heart-shaped sunglasses to parts unknown and I’m constantly in a rush, so I shrug and accept it as “good enough” before slumping my way out the door and always making sure other people enter doorways before me.

Confidence is my fantasy.

But confidence is more than just appearances and badass makeup. It’s partially about how you present yourself to the world, but it’s also about how you think of the world and your place within it.

As previously stated, confidence is my fantasy.

I don’t think I can remember the last time I felt 100% sure about something I’ve done. Confidence is a fleeting feeling for me—my moments of triumph are often blocked by moments of total doubt and self-consciousness. Praise always makes me feel sheepish—when I’m congratulated on a job well done, all I can focus on are the ways in which I don’t deserve the praise and what I could instead be doing better. In terms of the “larger picture,” I’m constantly questioning about my place in the world; my inner voice is loud and full of commentary on society and how I can change it, but I find it hard to verbalize those thoughts in a way that will get others to listen. When I do talk, I feel that others aren’t interested in what I have to say and that I’m instead rambling on like a damn fool for no reason.

Confidence is only unattainable because I keep blocking myself from attaining it.

Unfortunately, I am not alone in this. It has been proven that women have lower self-esteem on average than men, and often disregard or downplay any hard work they’ve done to achieve their goals. Katty Kay and Claire Shipman, authors of the book Womenomics, have noticed that, after talking with multiple highly successful women in America, that most women regard their success as luck or some other attribute beyond their reach. In an article published a few years ago in The Atlantic, the two women also noted there is a vast confidence gap which separates the sexes and that “compared with men, women don’t consider themselves as ready for promotions, they predict they’ll do worse on tests, and they generally underestimate their abilities.”

So not only am I totally devoid of confidence, I’m also completely unoriginal in feeling that way. In all of the ways I wish to have camaraderie with my fellow women, this is not one of them. Another reason for women’s lack of confidence in our abilities comes from our apparent need to be perfect. Shipman and Kay state that “underqualified and underprepared men don’t think twice about leaning in. Overqualified and overprepared, too many women still hold back. Women feel confident only when they are perfect. Or practically perfect.”

Perfectionism is the ultimate confidence cancer. Nobody’s perfect—even Mary Poppins. “Practically perfect in every way” my ass—you know, practically perfect because she acts as stand-in mother for the terrible, terrible woman who’s being such a shitty parent because she’s too preoccupied with fighting for women’s rights. Or how Ms. Poppins forced children to believe they were liars instead of allowing them to freely expand on the limitless possibilities of their imaginations. She had a pretty bitchin’ pair of purple shoes, though.

Maybe cultural and pop cultural cues constantly reinforce this need for maternal perfectionism as the ultimate goal, leaving us non-mothers to feel as if we only truly have one end goal in our collective lives, causing one existential crisis after another. Maybe this lack of confidence stems from a more scientific place. Much research has been done to explain why there is this notable gap in self-esteem between men and women and there is even scientific evidence provided in that very same article from The Atlantic. MRI studies have shown that women tend to activate their amygdala—the brain’s “fear center”—more easily in response to negative emotional stimuli than men do, suggesting that women are more likely than men to form strong emotional memories of negative events (those social media trigger warnings aren’t something to fuck with). Basically, women will constantly think back on negative events of the past more than men. I, as I have already mentioned, try not to talk on behalf of all women but goddamn if that isn’t true.

But what does all this science mumbo jumbo prove? That I’m predisposed to worry myself into a tizzy over every little move I make or word I utter until I render myself mute and motionless out of fear of making a mistake or overstepping my boundaries? That only weirdo, blind-to-the-world’s-pressures, robotic alpha-females can conquer this fear of confidence until they become feminist icons and I’m just not meant to be one of them? Is it that what I really fear is confidence itself and, in turn, confident, outspoken women? Or have I just fetishized it/them to a point that it’s a weird, masturbatory fantasy that achieving it wouldn’t make it as fun to ruminate over?

Am I overthinking all of this? Is that what I’m just supposed to do because I’m a woman?

Here’s something I am confident in: my inability to answer everything. I’m also confident in my stubbornness and unwillingness to accept that I’ll never have the gait of a women who knows what she wants and where she’s headed, who doesn’t stumble over her own words or start to cry when she’s overly passionate about something. I’m confident that fantasizing about my future self as a self-assured woman is a source of temporary happiness for me on a daily basis, and a goal I still look forward to attaining.