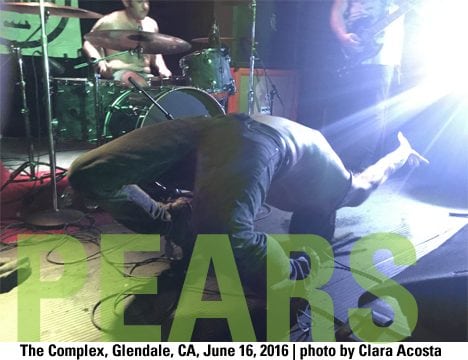 Pears Live at the Complex in Glendale, CA, June 16, 2016 By Clara Luci Acosta

It’s a Thursday evening in Glendale when I walk into a bar painted black, wall-to-wall and floor-to-ceiling. A disco ball hangs above a dance floor and looks completely out of place—but adds some comical charm to an otherwise drab room. This is the Complex: a small, hole-in-the-wall bar that fits one hundred people comfortably and around 150 uncomfortably. The crowd is a little different than what I’m used to seeing at punk shows. It’s an older crowd, clearly metal heads, and they’re uniformed up in more denim, pins, patches, and studs than I’ve ever seen in one room. Two things aren’t much different, though. The first is that the male-to-female ratio is easily a solid six to one. The other being that in a sea of light skin, my brown face sticks out like a sore thumb.

I easily move past the fact that I’m the only brown girl in the room as I’m far too excited for what I’m about to witness. Pears, the band I’ve been listening to almost every day for five months since my best friend Dustin put them on a playlist to expose me to the side of punk I’ve been missing out on: Fat bands. Although I’m going in only knowing the lyrics to “Breakfast,” I’m fully expecting the energy to be high and the room to be rowdy. In the crowd of nearly seventy people, just over ten are super stoked for Pears. When they come on stage, the fun begins.

They crack jokes during their mic check and have the emcee play them in with the Family Matters theme song. Things take a bit of a 180 as the song ends. Frontman Zach Quinn channels his inner Iggy Pop, removing his shirt and baring his skin, bones, and ink. He looks like art as he jumps and runs and contorts all over the miniscule stage, exuding raw energy. Even though I’m taking pictures, my eyes are watching him in real time, and I am in complete awe. In between songs, there is some sweet and humorous banter by guitarist Brian Pretus as he thanks us for coming out to their 299th show. Before anyone can get too emotional, they’re right back to swinging their axes, screaming into mics, and balancing themselves with melodic rhythms and catchy hooks. They somehow manage to play nearly every song from both of their albums, cramming roughly twenty songs into a forty-five minute set.

Their penultimate song is “Breakfast” and I just about lose my head, as do all the other Pears fans in the crowd. We’re singing our hearts out, sweating all over each other, and feeling completely and utterly free. Accompanied by labelmate and Strung Out bassist Chris Aiken, they wrap up their set with the title track from their sophomoric album, Green Star. The crowd goes absolutely nuts. It seems like every single person in the room is singing along word for word. When it’s over, Dustin and I head to the merch table and pick up some pins, stickers, and a T-shirt—signs that my love affair with this band has only just begun.

If you haven’t had a chance to see Pears yet, don’t fret. It seems these guys tour endlessly.

About the author: Clara is a twenty-one-year-old college student who still lives at home with her mom. She likes going to comedy shows, collecting records, hockey, wrestling, anything written by Chuck Palahniuk, and Guy Ritchie films.